Eliot got it wrong - February is the cruellest month, not April. Well, for gardeners in this part of the world anyway. Spring is so close, and temperatures are so mild. Surely, it would be OK to put the seeds in now? Surely it's time to take cuttings from the chrysanthemums? And wouldn't everything benefit from a bit of fertiliser now? I rush to my copy of The Gardening Year, hoping that last time I looked I missed something and it will tell me I can get going. But there is only this stern warning : ".... temperatures may reach 13°C (55°F), but it is always wise to ignore these false springs for the spell rarely persists and cold weather is sure to return."

Trying to tell myself that I'm in Italy not Britain doesn't work. I know there's occasionally been snow in March even here. But given how mild this winter has been ... I'm afraid it's stronger than I am, and I'm not sure I'm going to be able to hold out much longer.

In an attempt to distract myself, I thought I'd spend some time catching up with what other people have been doing. Big changes for Trillium, who's changed from being a weekend gardener into the owner of a small commercial nursery. Well, she says it's small but as she also said that "Three of the staff were in ... on Tuesday", it sounds pretty impressive to me. She's started a new blog to record her adventures.

Another interesting post came from John regarding an association which he's involved with called Thrive. Thrive works with disabled people, using gardening as therapy, and has a project going in Battersea Park. They need volunteers for various dates in the spring and summer - follow the link to John's site to find out when. I can't work out from their website what they do in other parts of the country, but John may know if you leave him a comment to ask.

A couple of people seem to have disappeared. Roy in Australia hasn't posted on either of his blogs since January - hope everything's OK, Roy. And Snappy moved house saying he'd be back as soon as he got the internet connected, and is still AWOL. Come back soon Snappy.

Carol of May Dreams Garden has managed to involve her nine year old niece Sophie not only in gardening but also in blogging. And nice posts she writes. The last one was about accidents in the garden. If you've done something daft while gardening, please leave a comment and give her a bit of encouragement to go on writing.

Carol is one of the few people who've managed to go on blogging more or less daily right through the winter. She's great at thinking of topics for posts, and earlier this month came up with the idea of asking everyone to post a list of what was in bloom in their garden on the 15th of each month. I missed it this month (though I'll be joining in next) but can't resist posting this pic of my salmon pelargonium which has not stopped blooming once all through the winter. As you can see, it now needs dead-heading, but there are still new blooms on the way. 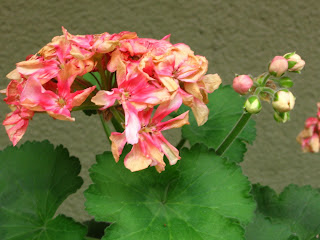 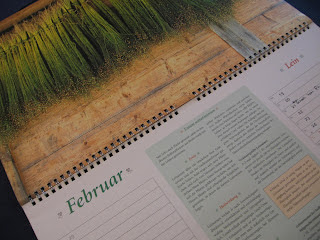 My calendar this month features flax – linum usitatissimum . My first ever contact with this plant was in the form of the seeds – usually known as linseed. I always fed them to my horses - a cupful mixed into their other food keeps their coats healthy and shiny. So I knew it well. But for quite a while I never realised that linseed and flax were the same thing, and so I never really associated it with the plant which produces linen.

Nor did I realise that it might do my hair some good too. Then, a couple of years ago I asked my hairdresser what I could do about my hair, which at the time was horribly dry and straw-like. “Try this spray” she said, “it’s linseed oil”.

And now the calendar. I put off reading it for a while, as it was full of frighteningly long words. If you know a bit of German, you’ll know that it’s a language which uses compounds a lot, and can often chain four or five words in order to express a concept for which English has an individual word. So when I got to the bit where it described the medicinal uses I was confronted with Magenschleimhautentzundung (stomach-mucus-membrane-inflammation) which I guess is gastritis, and Nasennebenhohlenentzendung (nose-near-cavity-inflammation) – sinusitis, I presume. But please don’t quote me - my dictionary failed me miserably and I really am guessing.

I have to admit I gave up on the German and went to the web to see if there were any recommendations. As last month, the best site seemed to be Purple Sage which suggested that linseed was a good remedy for constipation. But, the same as the calendar, it warned that you must drink at least two glasses of water with the seeds as they need to swell in order to have effect. Both sources also warned that only ripe seeds must ever be used as the immature seeds contain traces of prussic acid and are poisonous. As ever, make sure you buy it from a reputable source.

Back on the balcony – I took the covers off this morning. We’re having daytime temperatures between 9 and 15 degrees, and the fleece was a bit of an exaggeration. It does, howver, seem to have protected the flower buds on my stock - they look fine. I shall keep an eye on the weather forecast as there’s still time for the temperature to drop, but for the moment spring is in the air. When I went out this morning, I saw that the grass in one of the squares near here was full of daisies in flower. And my bulbs are starting to push through as well. The forsythia, though, which is usually the first sign of spring, is still only just forming buds, so I’ll reserve judgement for a bit ….
Posted by Sue Swift at 1:42 pm 3 comments: 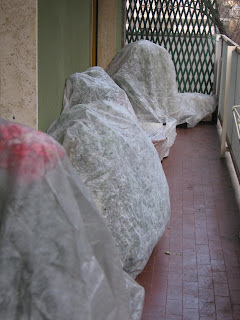 A couple of weeks ago I was talking about how we were having temperatures of 18°C. Well, within a couple of days they were warning that a big freeze was on it's way, and forecasting snow and sub zero temperatures. So I immediately rushed out, tucked everything next to the walls of the house and covered it all with fleece.

We did have cold weather one day - I think it dropped to -1° and for about three minutes a sort of sleety snow came down before it turned back into rain. But then the temperature went back up to about 6 or 7° and has stayed there ever since. I'm in two minds whether to uncover everything again or not. This is, of course what the balcony usually looks like in the winter. It's usually covered up from about mid December until mid or late February, or even later. It's not impossible that we have snow in March. I think I'll wait a bit and see. When I put the fleece on I noticed that the flower buds were already well formed on my stock - I hope I won't lose them all.

If you thought you were in the wrong place when you came into the blog, you're not - in a desperate attempt to avoid work one day, I changed the template. I lost my What flower are you? button, which I got from Hanna's site, and had to go back and do it again (click on the button if you want to try the quiz yourself). And lo and behold, I'm no longer a daisy - I've turned into an echinea. Not sure why. I had a second look at the questions, tweaked a bit just in case I'd been flattering myself before, but no - I always came out as an echinacea. A pity, as I rather identified with my daisy, but the colour fits quite nicely into the sidebar ...
Posted by Sue Swift at 9:37 am 1 comment: