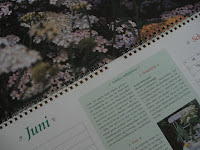 This month’s plant on the calendar is Achillea Millefolium – yarrow. I have to say that I only knew yarrow by its common name and I’d never linked it with the Achillea that I see in my garden centre every spring – which if I remember correctly is Achillea Lavatera, but I’m not sure. It’s not a plant which has ever particularly attracted me – the flowers were OK but the stems always seemed thick and gawky. And of course it's yarrow stalks which are used in the I Ching - the Chinese form of divination. The Chinese considered it to be a spiritual plant, and would plant it on the graves of their ancestors.

According to the calendar, yarrow can be turned into a tea to be used against period pain, while on the web Purple Sage lists a range of uses including action against fever, high blood pressure and diarrhoea. Purple Sage also mentions the origin of the name – it was apparently named after Achilles, who frequently used it to heal wounds after battles, and in fact one of its many common names is Soldier’s Woundwort. One of the reasons its now so common in Europe is apparently that wherever the Romans went, they planted it around their camps so as always to have a ready supply. And then for the same reason the British army took it to North America when they colonised.

Back to the literary references. I went and found my copy of The Iliad (probably for the first time in thirty years!) and found the passage. A wounded Greek lord asks Patroklos to use some herbs which Achilles has told him of to heal his wound :

… Patroklos laid him there and with a knife cut the sharp tearing arrow out of his thigh and washed the black blood running from it with warm water, and, pounding it up with his hands, laid on a bitter root to make pain disappear, one which stayed all kinds of pain. And the wound dried and the flow of blood stopped. (The Iliad, Trans. Richmond Lattimore Book 11 lines 843-847 Uni. of Chicago Press)

It also pops up in Longfellow’s Hiawatha (section 15). Hiawatha has a sort of breakdown after the death of his friend, but is sorted out by the medicine men in a healing ceremony :

There a magic drink they gave him,
Made of Nahma-wusk, the spearmint,
And Wabeno-wusk, the yarrow,
Roots of power, and herbs of healing;
Beat their drums, and shook their rattles;
Chanted singly and in chorus,
Mystic songs like these, they chanted.
…
And upstarting wild and haggard,
Like a man from dreams awakened,
He was healed of all his madness.

This links to another use, common in Scotland, of using yarrow tea as a remedy for depression – a sort of countryman’s Prozac.

Yarrow can cause an allergic reaction, though this is said to be rare, and is not advised for epileptics.
Posted by Sue Swift at 4:44 pm 1 comment: 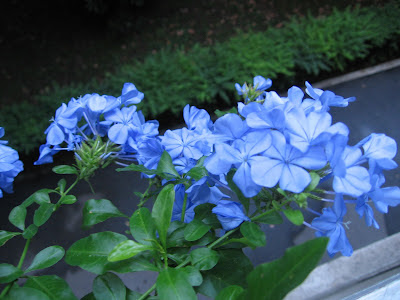 Gardener's Bloom Day again - I'm a day late but I took the photos yesterday so I hope it counts. Not much to report this month. I have to admit that I planted almost exclusively for spring this year. I'd thought that I'd be spending the whole summer away from Milan, and so there was no point focusing on the later months. But plans changed, and I'm still here. Plus the devastation that's been wreaked by caterpillars this year - it's left me a bit flowerless. So you'll notice a decided lack of wide angled shots in the pictures. I admit to having chosen the best bits. 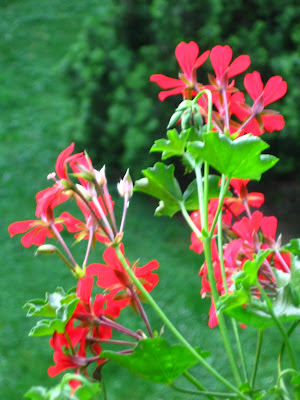 The best thing at the moment is the plumbago (top picture), which is an execption to what I've just said. As are the ivy-leaved pelargoniums. A second group of nasturtiums are now out, and the surfinia and antirhinums are hanging on well - boosted by the marigolds which are just starting to flower. 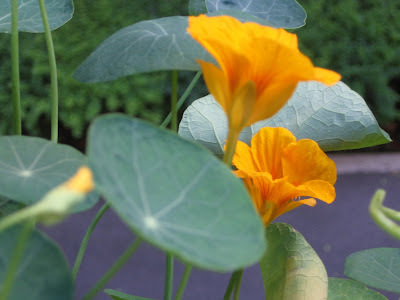 But the surfinia and marigolds are nothing like the ones I had last year. The surfinia (bought) are a different variety - I couldn't get the same ones as last summer - with smaller leaves and flowers. But they're also growing far less enthusiastically and look weak and spindly. The marigolds are suffering too, and lots haven't made it. 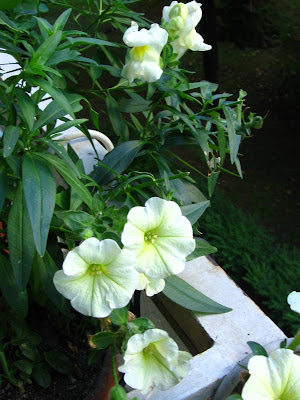 Odd, when I've treated them exactly the same as before and last year got such great results. The same is true for some of the other stuff I've sown this year, especially the zinnias and hollyhocks which were my pride and joy in 2006 and this year look considerably stunted. as far as the zinnias are concerned, I wonder if it's because I tried growing them in eggshells? It's not worked well for anything, which with some things I put down to too much calcium in the shells. But zinnias are calcium lovers, so I was hoping they'd do well. Oh well, chalk one up for experience. 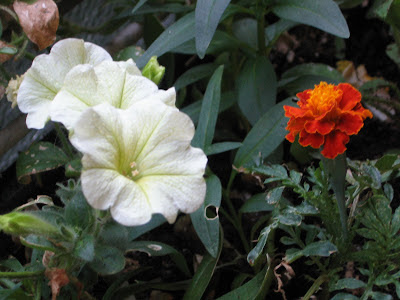 And then there are these rather weedy sunflowers, which is what you get if you steal seeds out of the hamster's food box rather than going and buying some decent ones. They're pretty but a bit straggly. 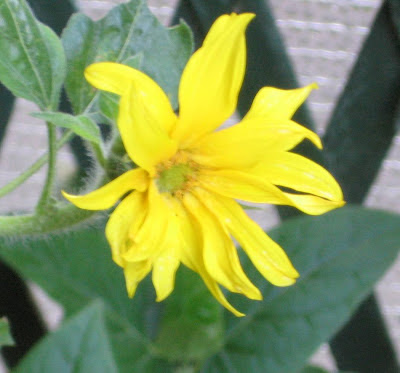 The seedlings which are doing well this year are the white and purple surfinia which I sowed with last year's seeds. They're not flowering yet, but look healthy and happy. With the plumbago and the ivy-leaved pelargoniums, they're more or less the only thing that does at the moment. Watch this space next month!
Posted by Sue Swift at 6:41 pm 3 comments: 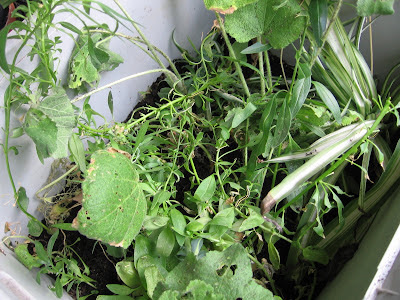 I have posted before on the plague of caterpillars which are devouring almost every plant I've got this year. I'm having to pick them off daily and am still not winning. But as I'm not into killing things, they all go into the caterpillarium.
The caterpillarium started when my son was small and I wanted him to see how caterpillars turned into butterflies. It's an old toy box partly filled with soil into which go various "extra" seedlings which I'd otherwise have thrown away, plus any plant which is too far gone to save - this year there have been a lot of the latter. In go the caterpillars, which then chomp away, pupate, hatch - and lay their eggs on my plants once more. So we start all over again. 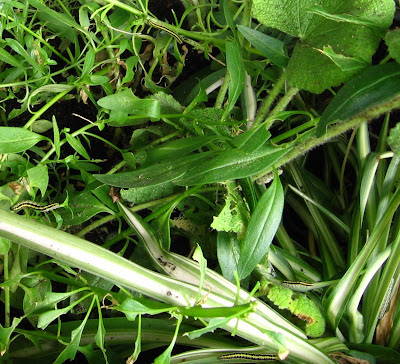 I had to redo the whole thing today as everything had been eaten by previous generations. On the menu we have : spider plant, antirrhinums, alyssum, hollyhock and various other bits and pieces. Needless to say, I make sure to put in the plants that they seem to attack most in order to encourage them to stay put. Now if only I could find a way of directing the butterflies straight there ...

Not So Loony Gardening ?

Do you garden by the moon? I get a monthly gardening magazine which gives a guide to the phases of the moon and advises on what should be done in the garden at each stage - from sowing to pruning. But I have to admit that I rarely follow it. My gardening schedule tends to depend much more on what I've got time for each week than what I think really ought to be done. Occasionally I do follow the guide, but always forget to label the plants so that I can compare them with others which were sown (or whatever) at the "wrong" time, so that I can see if it makes any difference.
But I was interested to see an article on the BBC site from back in May explaining how 600 volunteers were going to be working on a National Trust site planting annuals in sync with the moon and also explaining why it's supposed to make a difference. The article explains :
The Biodynamic Sowing and Planting Calendar predicts how plant sap and water table levels will be impacted on by the moon's gravity, and identifies optimum times for sowing certain types of plants.
According to the calendar, the moon's gravity produces varying conditions for planting, and is much more specific about the exact time when a flower, root or plant should be placed in the soil than conventional planting schedules.
Too late now for my summer planting, as everything's in. But perhaps it's a project for the autumn. Watch this space ...

Acknowledgement
Thanks to gonzalo_ar for making the photo of the moon available under Creative Commons Licence via the flickr site
Posted by Sue Swift at 2:10 pm No comments:

The Revenge of the Loquat

Never insult a plant - they have their own ways of getting back at you. A couple of weeks ago I made some very disparaging remarks about the fruit of the Japanese medlar (or loquat) tree. But only a couple of days later our caretaker picked the fruit of the tree in the garden of our apartment block and gave me several kilos. And they were delicious. He must have picked them at just the right moment, as they were soft and sweet but not at all gungy. The rest of my family declined anyway, but (with some sturdy help from the hamster) I gorged for about a week. And then started to itch ... and scratch ... and swell up. And it turns out I'm allergic to the things. 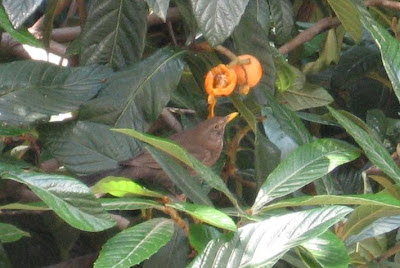 As always with these things, it flared up really badly on Friday, just after the doctor's surgery had closed for the weekend. So I had a thoroughly miserable weekend. It's easing up now, but if you happen to be in Milan and come across a madwoman with ears like Dumbo violently scratching her scalp, you'll know who you're looking at. I'm sorry, tree, I'm sorry ...
Posted by Sue Swift at 8:04 am 4 comments:

Invasion of the toxic caterpillars 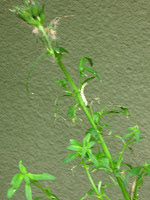 I've mentioned before that I've been having problems with caterpillars this year, and it's been getting worse and worse. We always have some, but nothing like this year. I've been going out every day to pick them off, and I've still lost about a third of my plants. For the first time ever red spider mite has paled into insignificance in comparison.

So I was interested today to come across a videoed news report on the BBC site about an invasion of toxic caterpillars in Belgium. It's such a plague that they're having to mobilise the army to deal with them. I can't link directly to the video, but click here and it will take you to the right page to find it (see the right hand sidebar).
Posted by Sue Swift at 2:57 pm No comments: