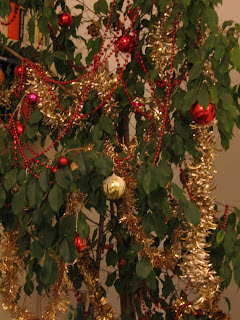 Do you like our Christmas tree? We started our own family tradition when my son was small - there was no point getting another one when we already had a seven foot monster dominating our (very small) sitting room and we were going away for Christmas anyway. But now, even when we stay at home, it doesn't seem necessary - this is "our" Christmas tree.

Christmas is a time for quizzes, so here's one for you about some common Christmas plants. I'll put the answers up after the holidays, but if you can't wait, you'll find all the answers on the net (I did!).

1. For me Christmas dinner isn't Christmas dinner without brussel sprouts. It's well known that they taste better after the frost has got to them - but why?
a. The frost kills the plant, which is then preserved because frozen, but becomes tenderer as it slowly decays.
b. Sugar replaces water in the cells to protect them from the cold, and so they become sweeter.
c. The frost breaks up the ground and allows more oxygen to get to the roots.
d. Actually, this is an old wives tale - it makes no difference at all. The important thing is that they've had longer to grow.

2. What was the sap of the Poinsettia used for in the 14th-16th centuries ?
a. as a poison b. to flavour soups c. as a cure for fever d. as a cure for nausea

3. According to Pliny the Elder, holly flowers had the ability to :
a. turn water to ice b. turn iron to gold c. protect against evil spirits d. revive the dead

4. Fir trees were used as a symbol of Christianity from the 7th century, and by the 12th century were Christmas symbols. But what was different about the way they were used?
a. They were burnt as a ritual sacrifice b. They were eaten on Christmas Day c. They were hung upside down from the ceiling d. They were worshipped

5. Only one native British plant has white berries. What is it?
a-d. Oh come on, you don't need clues for this one :)

Doubt if I'll have time to post again till after Christmas, so ....
Happy Christmas to everyone!
Posted by Sue Swift at 11:30 am 3 comments: 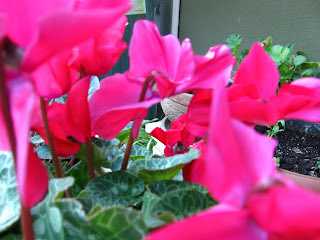 Has anyone else had problems with their comments recently? For some reason I'm not getting E-mail notification of mine any more ( I won't blame Blogger for that - I probably clicked on the wrong button and blocked the address instead of cancelling the message or something), but I'm also having trouble publishing them. In particular, the system "ate" one message from Lou Laz, so I thought I'd answer her question here.

Lou Laz wrote saying that she was going to be in Milan and wanted to buy seeds while she was here. It's not that easy. As you'll see when you arrive, Milan is all apartment blocks - almost no-one has a garden, and consequently all that the garden centres, supermarkets and street markets stock are fully grown plants, houseplants and in summer balcony plants mainly. If you go to the outskirts and to the roads leading out of town, you'll find more garden centres catering also to people with gardens, but in town the only place that I know that has a really good stock is Fratelli Ingegnoli of Viale Pasubio (they have another centre too, in Via Mecenate - depends which area you're staying in). Their website is here. 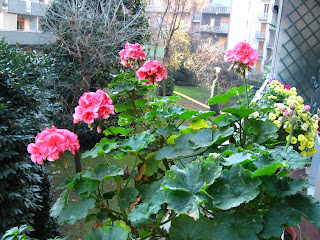 Back to the balcony ..... The mild weather has really made a difference this year. By now, I usually have everything stacked against the wall of the house and covered in fleece, but this year not only has it not been necessary, but also everything is still flowering in a way unheard of for December. All the photos here were taken during the last few days. It was the warmest November for thirty years - so warm that they weren't even able to use artificial snow on the ski slopes of the Alps until just this last week or so, let alone hope for the real thing. The four day weekend which we had last week is usually the start of the ski season, but this year there was no chance. As the whole economy of that area depends on the ski trade, it's a big problem. The temperature has dropped a bit now - we had our first frost the other day, though it's back to 7° today - but still nothing like usual. 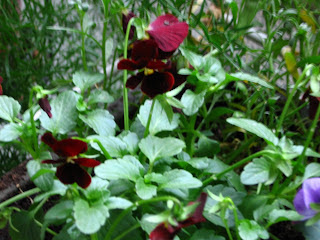 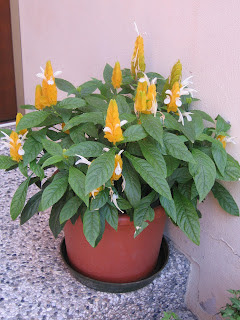 Every so often this summer I came across plants I liked, but couldn't put a name to. Where possible I took a photo so that I could try and identify them later. I've managed with quite a few but I'm still stuck on the four in the photos. Does anyone recognise them? 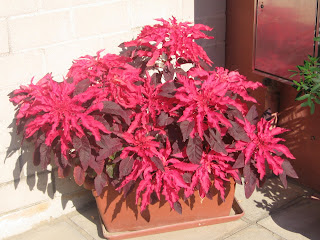 The first two were taken while I was on holiday in Caorle this August. I fell in love with both of the plants, but especially with the second one. I'm not usually a great fan of foliage plants, but I'd readily find a place on the balcony for this one. I've never seen another plant with quite the same colours, and I loved the contrast between the deep and bright pink. However, despite scouring garden centres and houseplant books, I've not been able to find either of them. 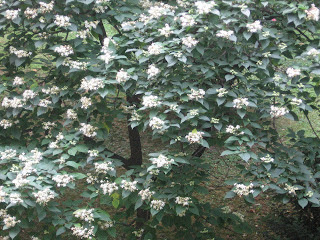 This, on the other hand, is one of the trees in the garden outside the balcony. It's deciduous, but winter is the only time it doesn't look good. Not only does it have an attractive shape and pretty leaves, but in summer (this is another August photo) puts out masses of white flowers. By late September, these have turned to clusters of bright red berries. 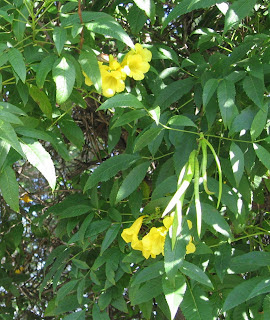 Finally, a climber I spotted when I was in Casablanca last month. It still had a lot of flowers even then, though the even greater number of seed pods showed that it was at the end of the flowering season.