If you are an arachnophobe - that is, if you suffer from fear of spiders - DON'T SCROLL DOWN. There are photos that you might not like.

But then, I guess that the average gardener can't be too worried. You can't move a leaf without seeing them, especially at certain times of the year.

I have to say I love them. OK, place one of the really poisonous types on my hand and I might freeze. But for the danger, not because it's a spider. In our house, the yell,of "Call Mum - there's a spider in the bath" occurs frequently.

All right - you've been warned, and I hope there's enough text for the photos not to appear above the fold, so that anyone who hates them will have disappeared by now. But just in case we'll start with the least spidery.

What, I wondered when I was at home in England, were these little yellow balls sitting in my front garden hedge. To the naked eye they just looked like blobs. It wasn't difficult to guess though, and when I blew the photo up - baby spiders! 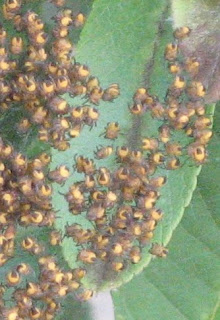 Whose babies, I wondered. I didn't notice any adult golden-black striped spiders in the garden, but I looked them up and Araneus diadematus seems to match. According to my book on British wildlife, it's supposed to be the most common British garden spider, so I'll go for that.

Not sure about this slightly out of focus but hugely pregnant lady. I know how she feels - I was once hugely pregnant in the June heat too. But haven't been able to identify her so far - ?? 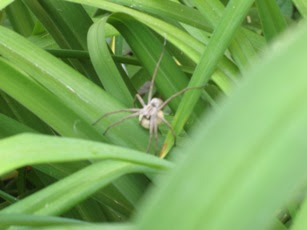 By far the most common type of spider in the garden seemed to be a small one with a green abdomen and dark legs. Possibly Araniella cucurbitina ?? But the legs seemed darker. They never stuck around long enough for me to take a photo. How many spiders are there in Britain, I wonder? Or in Italy ? I rarely seem to see them here in the city. And in the whole world?

The last type I saw was, potentially, much more scary. This is what my mother used to call a cob - though what the difference between cobs and spiders is (if there is any), I don't know. And I've not found a really similar picture. But she just sat there at the base of the compost heap while I rushed in to get my camera. So I doubt if she had any really evil intentions ... 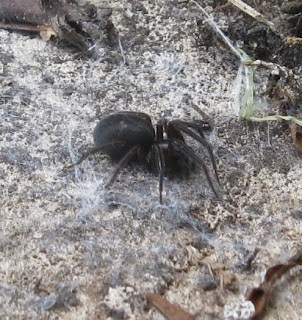 Before and after - but mainly after 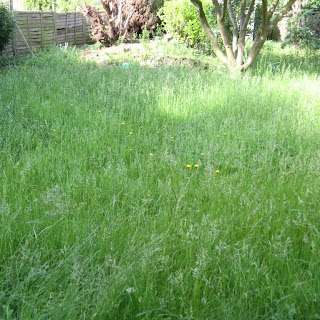 Oh, when you stop blogging for a while, how difficult it is to get started again. I had a good excuse in the beginning - I was too busy gardening. At the beginning of June I went back to London for a fortnight. I had a couple of days work to do there, but the rest of the time was dedicated to sorting the garden out. I had my laptop with me, but the long evenings were too tempting - it seemed better to be doing it than blogging about it.

But then I came back. Must get a post up. But somehow it didn't happen the first weekend, and then the following week got taken up with work. And the same the week after.

So there we are - four weeks without a post. Will I ever be able to hold my head up on the internet again without shame? Will I find myself drummed out of the ranks of garden bloggers? Maybe - but not having time to blog has also meant I've not had time to catch up with other people. And if it redeems me just a tiny bit, I have to say I've missed you all ... 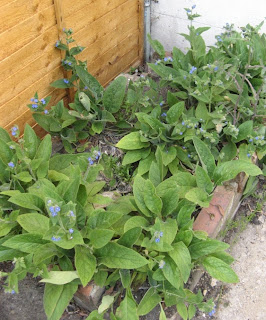 One of the reasons I didn't blog in the early days I was in London was that I couldn't face another what-a-mess-my-garden-is post. It was, of course. The borage was thriving, the grass on the lawn was knee-high and goose grass was smothering everything. The roses had blackspot and if London snails were edible, I would have been able to open a restaurant. 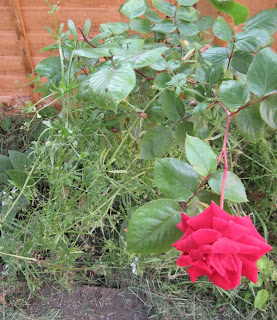 But amongst all the weeds and chaos, there were also bright spots ...

I curse the pyracantha hedge every time I have to cut it. But I have to admit it's glorious at this time of year. It must be at least twenty years since I've been in London in June, and I'd forgotten ... 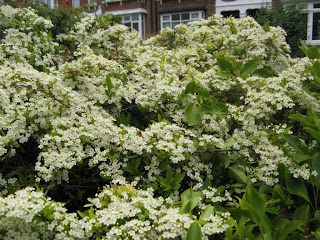 The front lawn had daisies - and do I mean daisies ... Shastas, I think. 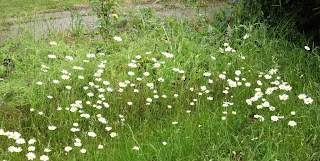 The pansies which I'd planted last year were hanging on in there ... 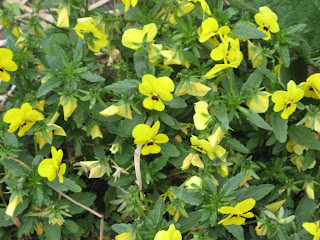 The roses were trying hard ... 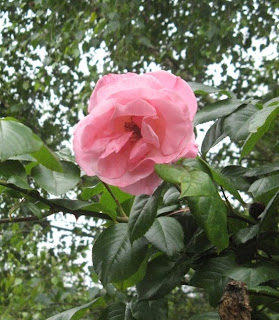 And there were several little geraniums scattered around... 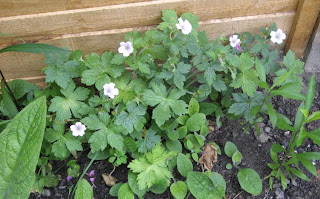 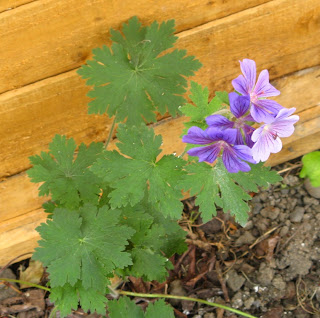 The weigela was past its best but still splendid ... 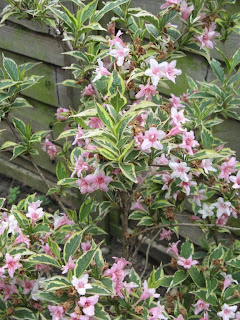 And when I finally got the weeds out ... 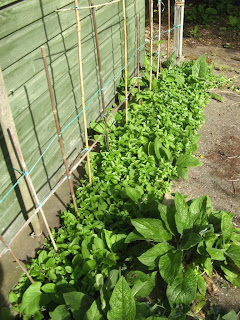 ...I found that three of the runner beans which I'd thrown in in April, had made it. I imagine the rest succumbed to the unusually severe temperatures which England suffered in early May. Will they survive the current exceptionally high temperatures (it's 31°C today, a friend tells me) with no-one there to water them? 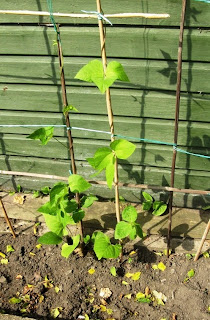 That goes for all the other stuff I put in while I was there. It's not fair - England is just not supposed to have drought conditions in June ... 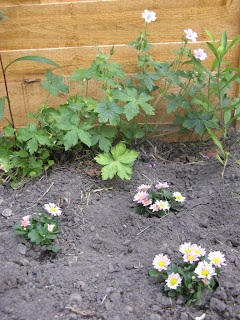 But maybe the stuff which has had time to get established will be OK. When I was there last year, I carefully replanted all the Michaelmas Daisies, Golden Rod and other self-seeded stuff in clumps. And in April I threw in a few seeds - such as the nasturtiums Briana sent me when Bilbo cam to stay. Once I'd got the weeds out, they seemed to be doing well. 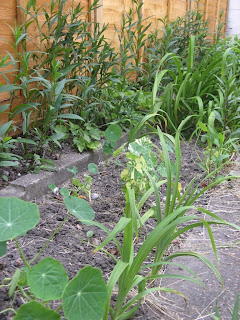 The alyssum seeds which I'd scattered around had made it and were holding their own against the borage ... 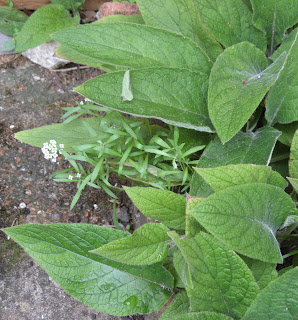 And I found I was growing potatoes on the compost heap ... 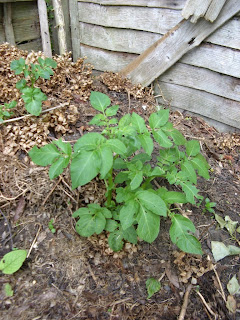 And finally, my favourites - little clumps of campanula were bursting through everywhere . 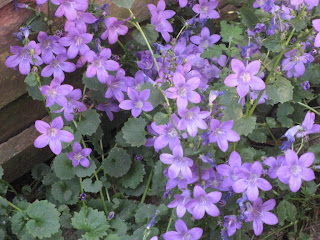 I shall be back in a couple of weeks. Here's hoping that they all survive the heatwave ...