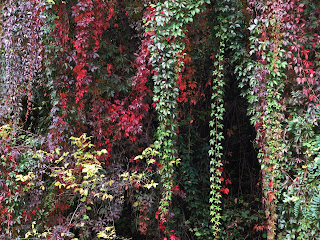 Autumn has now definitely arrived, although temperatures are still very high for the time of year and you can still go out without a coat. But the trees are starting to change colour, and the Virginia Creeper (Parthenocissus quinquefolia) is glorious at the moment.

I love Virginia Creeper. My grandparents used it in their garden to hide the area where they kept the dustbin, and here in Milan it's very common on balconies. People grow it up wires and trellises at the front of the balcony, to shield the house from both the summer sun and the eyes of the neighbours in the buiding opposite. I don't have any, because it would take too much space away from the other things, but I enjoy watching my neighbours' vines turning to brilliant vermilion every winter. Our caretaker, who has to sweep the fallen leaves off the path every morning, may well have a different opinion. 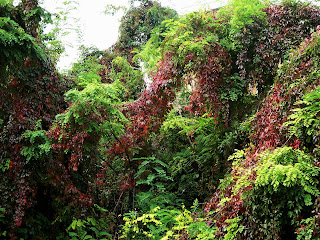 On a balcony it's relatively easy to keep under control, but in a garden it can run riot if you don't cut it back. It can grow to 50 feet, and once established is almost impossible to get rid of, as it spreads from rhizomes. It's quite happy anywhere in zones 3-10 too, so don't bother hoping the weather will do the job for you. If you plant it, you've got to be willing to love it.

On the canal which runs close to us, it's started growing wild. The local authorities always used to keep the canal banks tidied, but in the past few years they've been left to their own devices. And nature has just taken over. The Robinias are leaning drunkenly into the water, with Virginia Creeper wound insidiously around trunks and branches, then drooping downwards so that it almost obscures the tree completely. 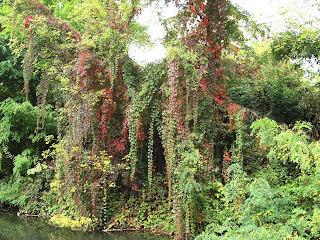 Will it eventually kill off the trees if it's not kept under control? The web seems divided, with some sources saying that it will deprive the trees of light and kill them that way, and others saying no, they'll co-exist quite happily. 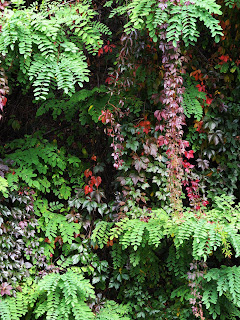 While I was browsing though, and trying to find out, I came across this bit of information on the meaning of the name at about.com :

Parthenocissus is a backward translation (and a rather lame one, frankly) from the English, with a healthy dose of poetic license. Partheno- means "virgin" (as in "Virginia") and cissus translates as "ivy."

If you weren't already convinced that Latin names are crazy, that should just about do it I reckon. 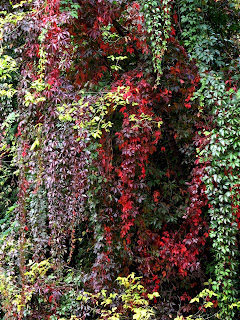 Labels: Autumn, Off the Balcony, The Martesana Canal 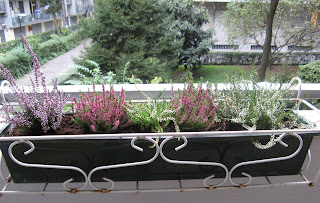 Heaths and heathers - can you tell them apart? I'm not sure. I've pored over the descriptions and photos in my gardening books and on the net, and I'm still not sure what I've got on the balcony at the moment. They were sold as Erica - that is heath - though the variety wasn't specified. But Erica is supposed to have needle-like leaves, and mine are different - to me they look like the leaves of Calluna vulgaris - the Scottish heather or ling. Some species and varieties of Erica don't flower at this time of year, but others do - so that doesn't help. 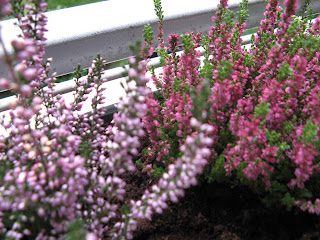 Does it make much difference? Not really. Calluna is hardier than Erica, but that's not a problem on the balcony, where I can easily protect against the few really cold spells we have. We're in zone 8, and while it can drop well below freezing outside, the warmth from the house means the balcony is far less at risk. I'm more worried about summer heat, and as many species of Erica are limited to southern Europe and Africa, thought it might be a better bet. But no, Calluna vulgaris is supposed to like full sun and be heat tolerant - suitable for US heat zones 4-7. I'm not sure what our heat zone is, but I suspect it's somewhere in that range. Heat zones are based on the number of days per year the temperature rises above 30°C/86F, and for us that means any time mid-June to early September, with the middle six weeks rarely far below. I have to say though that it surprised me. I wouldn't have thought that a plant which chose to grow so abundantly on the Scottish moors would be a sun-lover. 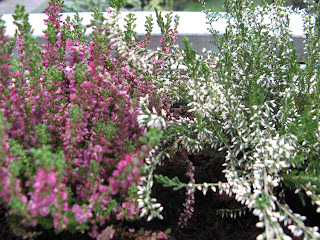 But apart from hardiness, they both seem to like identical treatment : acid soil, no fertiliser, and constant moisture but good drainage. So from that point of view it doesn't really matter that I'm not sure what I've got.

In any case, they're my choice for this month's Gardeners' Bloom Day post. Yes, I know - late again. I didn't really have much choice this month. It's been a busy period for work and most of the stuff on the balcony is currently dead or dying - I kid myself it's due to the change of the season, but several plants have been looking at me accusingly and muttering under their leaves about neglect and cruelty. I'm sorry - I will get back out to you sooner or later, I promise ... 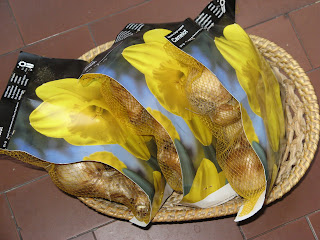 Well, daffodils actually. But they could have been tulips.

We had to go to my son's school last week for a start of year meeting, and as we were waiting for the bus on the way back, I noticed that the little Piazza in front of us was covered with crates and crates of bulbs.

Bulbs. (Fall-rise intonation, as in Yes, that's what I said). We don't get bulbs in Milan - or at least, only very rarely, sold in ones or twos, and at exorbitant prices.

Milanese bus stops have this neat litle device which tell you how far away the next bus is, and this one said five minutes. So I left my husband and my son at the stop and popped across the road for a look. Just a look you understand.

But when I saw the prices ... In Italian terms, they were giving them away. And I had almost no money with me.

I looked around for the guy who was selling, and heard him talking to another customer. He was speaking in English - with a decidedly Dutch accent. Aah. (Fall-rise again, this time as in So I'm buying direct from the producer. That explains the prices.) I asked him how often he was there, with a view to coming back with some cash. Once a year, was the reply.

Ah. (Falling tone this time as in This could be a problem.) But though I didn't have much money with me, I did have a husband. So back I go and say that they could get the bus and go home, but I was going shopping - oh, and could I have some money?

An audible sigh was heard and eyes went up towards heaven. But a wallet was pulled out and I was handed a blue banknote. I'd been hoping for a brown one, you understand, but he knows me. He knows me.

Back I skip. Almost all the bulbs are tulips, of all the varieties under the sun. It's tempting, but I "did" tulips this year, and space on the balcony is limited. So I go for daffs instead.

There are also racks of plants. I avoid the cyclamen, which I've got already, and pick up six heathers, a veronica and some asters. All so cheap that I'm not even counting. But that's about all I can carry, and I must surely have spent all the money I've got by now. How much? €12,45 - but call it €12. Whaat? (rise-fall intonation as in This guy's giving them away and he's still giving me a discount?)

So at that point I decide that I might just stretch to some more bulbs. Let's round it up to €15 and call it a day ...