The Beginning of Winter 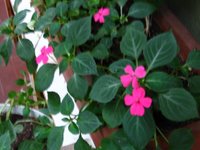 I suppose you know that winter is coming when you suddenly can't think of anything to blog about. I can't believe how long it is since the last post. I seem to have been working on the balcony as much as ever, but it's all clearing up work and settling things down for the winter. The excitement of the summer now seems long gone.

The weather has changed this week and it's got noticeably colder - down to about 8° at night. So I've started to bring in the plants that won't survive outside when the cold really hits. I could probably have hung on a bit longer, but the heating is now starting to come on, and I wanted to get them in before the difference in inside/outside temperature got too great. The tree is back in its winter position in the sitting room and I've taken several houseplants into the office. My flat is fairly dark with no window-sills - while my office has a big window with a large wide sill, and plants do very well there. 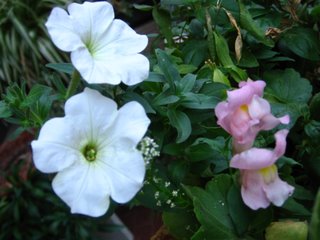 I had to prune the tree back, despite really wanting to wait till spring. But it was way too big for the room. So I've cut it back to a manageable 7ft in height and about half what it was in width, and I'm keeping my fingers crossed. It generally goes into shock when it first comes in, and sheds quite a lot of leaves, but then calms down. I'm hoping I've not created too much extra trauma. 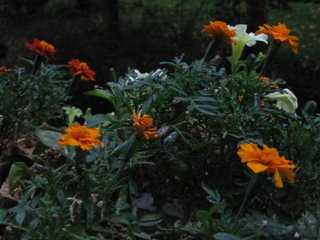 At the moment the only things which are really flowering are the Cyclamen, though as you can see from the photos a couple of marigold bushes and a few other things are hanging on in there heroically amongst the dying remains. I don't think they'll last much longer though. Even the Zinnia have finally given up. The Chrysanthemums (or whatever we're supposed to call them now) are full of buds but won't be ready to flower for another two or three weeks. 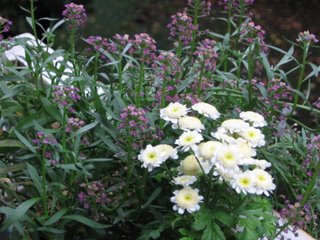 As I've cleared out the summer stuff, I've also been planting the biennials (bellis, forget-me-nots, wallflowers, stock, hollyhocks and a few others) into their flowering positions for next spring. None of my pansy seeds germinated this year - I don't know why because I've never had problems before - so sooner or later I shall have to go out and buy some. A pity, because I love the weird and wonderful colour combinations that you get after they've cross-pollinated for a couple of years.
Posted by Sue Swift at 5:39 pm

Yes, winter is coming, indeed. What kind of tree did you move inside? Sounds big, whatever it is.

Nice photos of your flowers...what tree do you have that you bring inside?

It's a benjamin fig - if you look at the Sept 11th post you'll see a photo.