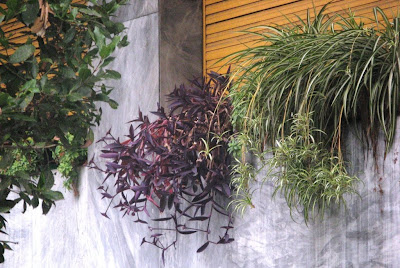 Half way through the week I got a message from Mr Subjunctive, over at Plants are the Strangest People. Had I any idea, he asked, why in the past few days he had had literally hundreds of hits from Italy - all for people searching for the plant Tradescantia pallida (the purple-leaved plant in the photo above). Well no, quite honestly I hadn't - but after a bit of research I managed to track it down.

A couple of days previously, the most widely read Italian newsaper - Il Corriere della Sera - (and I imagine much of the rest of the Italian press too) had published an article quoting some US research. The researchers placed T. pallida at the top of a list of the five houseplants most effective at absorbing pollutants from the atmosphere. And clearly the whole of Italy had decided it was a must-have. I spent the rest of the week imagining the hordes which would be camping outside the garden centres all night, desperate to get hold of the last puny specimen. 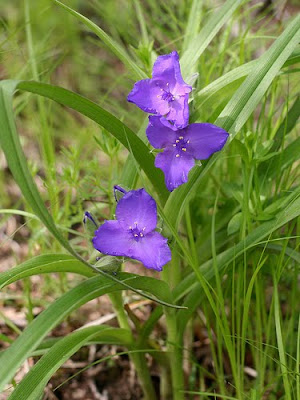 Tradescantia is a plant which confused me for years. I knew it even in my pre-gardening years, because Dad had it growing in the garden. It had a little purple flower and leaves a bit like those of a daylily (not that I knew what those were then). But then I heard the name being given to a houseplant with green and white stripey leaves. Oh - so that was tradescantia. Perhaps Dad got it wrong.

Then I started gardening and bought myself some gardening books. There was my stripey plant - Zebrina pendula, common name : the inch plant. Problem resolved. Dad was right all along. 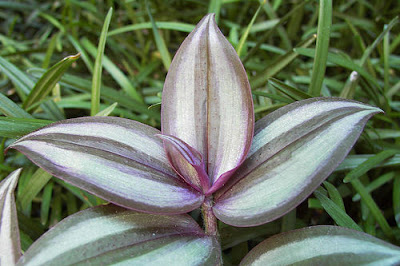 But wait a moment - look at the entry for Tradescantia. It describes a species called Tradescantia fluminensis, and there's a photo. But that's a plant I'd had on the balcony for a couple of years without knowing what it was. I'd ended up ripping it out because it made such a nuisance of itself, invading the whole container and crowding out the other plants. There it is in the photo below, still under control. It's the plant in the forefront just in front of my antirrhinums. So that's Tradescantia??? What else does the book say ? Common name - the inch plant. 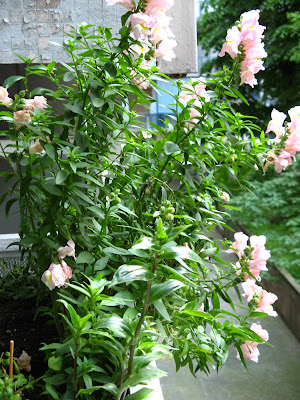 At this point, boy was I confused. All I can say is that I'm glad I hadn't also come across Setcreasea pallida, which Mr Subjunctive pointed out. That's it in the top photo. And yes, I know what I said before ...

I'll cut a long story and several hours of research short. It's another case of what I talked about before in the post On the naming of plants (and yes, I know that post is starting to obsess me. I promise not to mention it for at least another month.) The taxonomists keep changing their minds.

They're now all seen as different species of the same genus - tradescantia. There are 71 species in the genus altogether, many of which look nothing like each other - though the flowers tend to give the game away. Here, from the top, the photos show tradescantia pallida, tradescantia ohiensis, tradescantia zebrina, and tradescantia fluminensis - I think.

I mean, I did the research yesterday. They've probably all changed their names again by now.

However, whatever you call it, it seems that T. pallida is a good thing to have around. But then so are the other four on the list - and all the other plants whose anti-pollution effect people have been talking about for years. What are they and what do they do? I'll save that for another post....

Huge thanks to the photographers who made the following two photos available under Creative Commons License on www.flickr.com :

If you want to know more about Tradescantia pallida and Tradescantia zebrina, click on the links to see posts at Plants are the Strangest People. I couldn't better them so I'm not going to try. Go see for yourself.

It is certainly a beautiful plant with that colourful foliage -- I can understand why it would be popular, on the balcony and in other places.

I grow lots of Setcreasea because it blends so well with its neighbors in yellow or apricot shades.

Tradescantia virginiana, which I guess is the southern relative of T. ohiensis plants itself all over here, but is appreciated in earliest spring when it blooms profusely ahead of most other perennials.

And don't forget the native here in Virginia... Tradescantia virginiana --have it growing all over the yard.
I do appreciate the variety of Tradescantias....Tradescantia pallida Purple Heart is hardy here and a nice punch of dark purple foliage in the garden.

Oooh, that top photo is really neat. Is that your balcony?

Love your balcony display Sue in the top photograph. Both the plants are looking so good together.

Thank you all for your comments.
Fern and Sujata - no in fact, the that photo isn't from my balcony. It's a windowsill which I spotted on our block. But you're right - it's a good combination. I don't have any T. pallida at the moment, but may well get some to combine with my spider plants as in the photo.

Sue, I wanted to come by and check out your blog since you were so kind as to leave a comment on mine! (The Wabi Sabi of Autumn)

I just know that Tradescantia pallida is good for environment. I agree with you, it's a must to have it in the garden.

Funny post. Why do people get taken in my popular reinterpretations of some kind of research. As if one plant in the house would make a difference. Still the garden centres must have been pleased :-)

Hmmm ... I used to grow T. zebrina and T. pallida as house plants years ago. Might be time to try them again.

This is the good blog with good images and good details. Please keep on posting the more stuff. I will like to hear more from you.

Thanks for sharing this info. I have this in my garden but never knew about these facts. Going to tweet with your due permission for some awareness. Thanks.

Oh! I love purple heart, and spiderwort, and wandering Jew! Those are names I recognize.

Thanks for this post. I had no idea that these plants were all 'kin' to each other!

remember doing very similar research some years ago, Sue. There are several more really interesting Tradescantias, all superficially quite different, but similar when you study them - an interesting exercise in taxonomy. I love particularly T.virginiana and have it in five varieties. I love the cynical common name, as so many common names tend to be twee and sentimental: Widow's Tears - because each flower lasts only a day!

Hello,
I came by way of Blotanical, where you left a message for me months ago. I haven't learned to use Blotanical before...so here I am. This is a houseplant here in No. Illinois. I call it wandering Jew also. That common name has been handed down through the ages.It grows and grows. I am always cutting it and starting new plants to give to friends. Thanks for commenting at Blotanical.
Balisha

Nice post, Sue. I like the tradescantias, though I don't grow the indoor ones anymore. The cats find them delectable, and we don't need them dining on things they should be leaving alone.

Hi, Sue,
My experience with tradescantia when I was a child in England was similar to yours ... except my mother grew it as a houseplant. It was one of the first Latin names I learned for a plant. I have two in my PA garden and the locals call them spiderwort. Great post!!