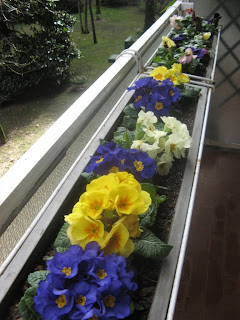 Spring finally seems to have arrived. Only two weeks ago there was still snow on the ground and night-time temperatures were dipping to -5°C (22°F). And then suddenly today, it was here. Bright sunshine and 17°C (63°F). I was out on the balcony like a shot.

Off came the fleece, and the work of clearing up after the winter started. As I said after Christmas, I lost a lot during the big freeze this year, and there was a lot to throw away. But the real work on the balcony in February isn't really gardening at all. It's housework. 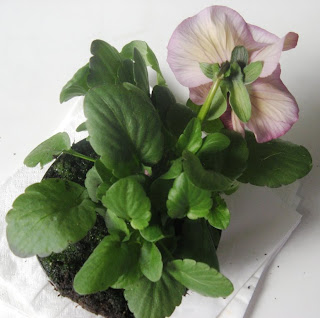 Washing down the railings, sweeping up the dead leaves, washing the floor, washing all the tables and container frames. As my husband said - Why don't you do that in the kitchen occasionally ?
Because that's his job. And anyway, he exaggerates. Back to the plot. 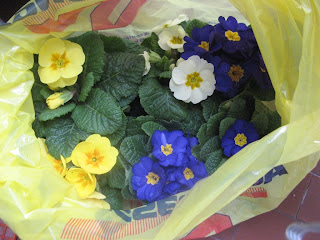 It couldn't be all boring stuff though. I had to have some reward for all the hard work. So while we were at the supermarket, I bought the first plants of the year - primroses and pansies. And concentrated on getting one corner of the balcony fully finished so that I could get the containers back up.
I've talked before about the dangers of buying plants on impulse at the supermarket. These looked healthy enough though. But sure enough, when I got them home, two of the pansies were completely waterlogged. 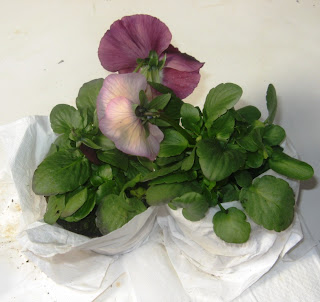 First aid was clearly called for, so I whipped them out of their pots, wrapped them in absorbent paper and sat them in the warm sun for a while. After a couple of hours the paper (which I changed a couple of times) had soaked up as much of the water as it was going to, so I popped them in the container with the others. I've left the surrounding compost fairly dry, so I think they'll make it. I'm hoping that they'd just been watered when I got there, rather than having been sitting with their roots water for a couple of days. 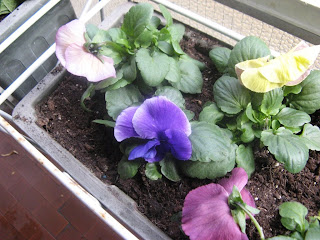 So we're off again. The cleaning up and washing down is going to take a while to complete, but there's plenty of more interesting stuff to do. The plumbago needs a good prune back, and the first seeds can go in. Please, please don't let the weather change back ... 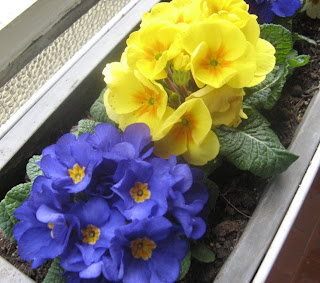 The most exciting time of the year! Such lovely little plants.

You make me want to run outside and build a balcony so I could have railing planters! :D Such beautiful flowers...:)

At this time of year instant colour is a boon and Primulas in particular are very good at that. I do agree that gardening housework is way more interesting than the indoor kind!

this is such a nice blog. lots of info thanx

I love primroses and pansies at this time of year - I've over 80 pansies and only 2 are thinking about flowering. I would just love to be able to get into the garden its frozen solid. I got some pink pansy seed packets last week as they are my favourites and they are so hard to source as a pack of single colours over here.

OH SUE !!!!!!!!!!!!!!!!
I knew there was a reason I hadn't been here in a long time (other than being sick : ) Lord !! if you haven't made me completely jealous with these gorgeous primroses and pansies (which I love so much with that heavenly scent !!)
you have made a gorgeous Spring Eden on your balcony girl .. it is perfect !! i think I will just stop and stare at the pictures for a while and convince myself that this is my view too ?? LOL
Joy

Spring has arrived on your balcony! They look very pretty and I love all the colors. It is amazing how quickly the weather can change.

with your location, you hold a distinct advantage... here it's all still snow and ice.
Sue, i was hoping you could spare 2 minutes to help me out. i've lost half of my pelargoniums to a pest over the winter (sigh...) and i've posted about it. but i have the silly problem of not knowing the name of these bugs in english. perhaps, if you took a look at the pix, you'd be able to tell right away?
i hope the pansies will make it, you chose some wonderful colours!

Hello Sue, Thank you for stopping by my blog and introducing yourself so that I might pay you a visit. Potatoes in containers, yes! Your flowers are indeed enjoying being there. Diana

Sue, What a wonderful spring display. We're still a few months away from that here in Maine, so thanks for the opportunity to experience a vicarious early spring. -Jean

Your flowers are lovely. It's too soon for pansies and primroses here. I'm still having problems with Blotanical. It makes some of my favorite blogs hard to find. Now I'm just a click away from yours!

Lovely flowers, wish to have a lot of these this year in my garden!

What a cheeky hubby!
Your balcony is coming back to life, what joy for you and for me to watch. Beautiful flowers x

You chose beautiful plants with exiting colour, and Spring will feel very welcome upon arrival.... ~bangchik

I do hope those pretty pansies recover. It might seem counterintuitive, but if you pinch off those huge blooms on the waterlogged plants, it might help them settle into their new "digs" better, put their energy into roots and foliage for a bit, and spring back to flower strongly later. ;)

Now is when our pansies pick up a little bit for a last few months' show (March, April, and if we are lucky a bit of May) before they bite the dust in our heat and heavy humidity. Enjoy spring!

Those plants look lovely, it's so nice to have something in bloom at this time of year.

Beautiful. Pansies are such cheerful plants. I adore them and cant do without them each year.

I found you from a comment at Jayne's garden blog.

Love your balcony garden idea! You can have flowers and herbs all growing season and enjoy playing in the dirt without backbreaking labor.

I was tickled to see your technique for curing waterlogged pansies. Will store the paper idea away.

i lovelovelove pansy plants! they are so adorable and easy to grow. what could be better?!

I just wanted to stop by and thank you for paying me such a nice compliment. I was working in the yard today as it is sunny, but the wind is blowing to 45 mph, so I stayed inside the fence. I do wish spring would arrive.

Primroses are among my favourite flowers. How exciting to be getting outside and gardening already. My garden is still under snow.

aloha sue, i remember when i had a small balcony garden in sfo, it was my small garden paradise and i loved it and i'm sure your space is just as beautiful and even now with the first signs of spring...hope it warms up even sooner for you!

I love the combination of the yellow and blue of the primroses Sue! Good luck with the recovery of the pansies :)

Sue girl .. I had to "visit" again and get a good dose of COLOUR with these gorgeous pots : )
I so NEED to see something other than white and this is perfect .. I can almost smell those pansies : )
Joy

Dear Sue, I know, from my walkway in Budapest, exactly what you are describing here. After the winter the outside work has little to do with gardening, much more to do with housekeeping!

The Universal pansies are always excellent value and, with constant dead heading, go on and on.

I have added myself as a 'Follower' in order that I do not lose touch again.

Just found your blog,it's wonderful and thank you for welcoming me to Blotanical. You know I've been referring to the lovely plants you bought for your balcony as polyanthus, but as usual I seem to get names wrong, they're primulas. I can never resist the colors!

Maybe a bit late, but congratulations, Sue, on your Blotanical award.

It's all looking loved on your balcony. Your hard work paid off.

Now, if only our bloody rain would stop I could get on with ours!

Thanks for the dose of springtime :)

I missed this post earlier, Sue...love both pansies and primulas, but it's too early here for either of them outdoors...so I'll enjoy yours!

Ah, pansies are my favorite! I have some out in a garden bed but it is still too cold for them to do much. They look so sad. Your balconies are looking really nice.