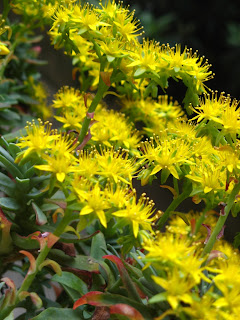 I posted a couple of years ago about Milan's addiction to sedum. This is the time of year when, wherever you are in the city, look up and you'll see yellow streaks lining the balcony railings. It almost seems to be an unwritten law that you have it growing on your balcony, even if for the rest of the year you don't have so much as a pelargonium growing out there. 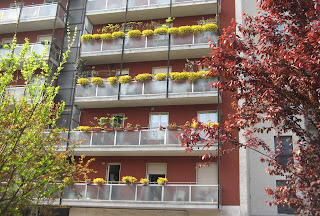 I mean, look at this one. Not exactly overflowing with plants and containers. But out of the four containers that are there, three contain sedum. 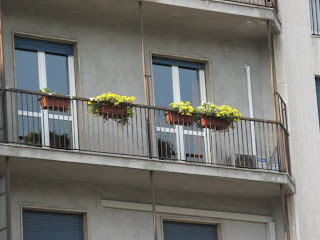 Why is it so ubiquitous? Probably because it's almost impossible to kill the stuff. It was the only succulent on my balcony which survived the exceptionally cold temperatures we had this year, and despite the fact that I overwatered it pitifully when it was still far too cold to do so, it bounced back. Leaves dropped, others turned brown, and for a while it looked considerably shell-shocked - but back it bounced.

The only thing you can do with it is give it away. And this I think is the clue. for I have never, ever seen it on sale anywhere. But it's the pass-along plant par excellence. When it gets too large, just break off the stems, stick them in another pot of earth - and give them to your neighbour, smiling sweetly as if you're doing them the greatest kindness on earth while secretly chuckling to yourself that you've managed to halve your stock in one fell swoop and make it someone else's problem. Of course, she won't be able to kill it off either, so the following year she'll pass some along to her neighbour ...

And so it spreads inexorably, haunting the balconies of non-gardeners throughout the city. They'll scorch it all August, leaving it waterless while they're at the sea. They'll leave it to freeze all winter. But next spring, there it will be, proudly lining the balcony. 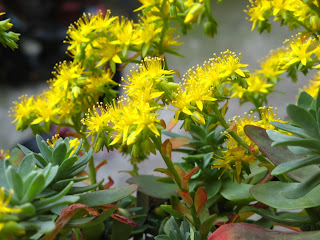 What type of sedum is it? No idea. I call it Sedum milanensis. And if that's not its name, it should be.

I have a love/hate relationship with the stuff. (As I said above, I have my obligatory container. Two in fact. Guess how I got them ?) For most of the year it just sits there, looking boring, grey and unattractive. And then for a couple of weeks in April, it explodes and it's glorious. And not only do I enjoy my own but I'm also fascinated by looking up and seeing all the yellow-lined balconies. Why else do you think this is the second post on the same topic in three years?

So hooray for the sedum. If only because it encourages non-gardeners to have at least one plant on their balconies, to my mind it's earned its place on mine.

That really must be quite a sight in person, to see all that Sedum lining the balconies. It's rather impressive in your photos!

Hahaha. Pass the plants to a neighbour and make it someone else's problem. I think no plant here are as hardey as that except grass. I think the flowers are pretty though, even if it's a nuisance sometimes.

I like sedum containers for the low maintenance! I am using more in my garden. Buy one plant and pinch and plant as many more as I want! :-)

I think the masses of yellow look great on all the balconies. A nice way to get at least a little "garden" everywhere.

We have some of course! It's excellent at being neglected and it's not only the flowers that look good. The leaves get tinged with bright red, see my photo here http://www.blipfoto.com/view.php?id=233911&month=1&year=2009,in the middle of winter.