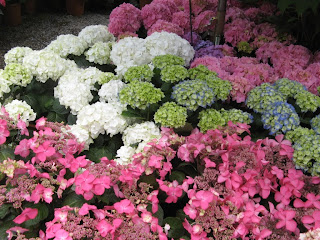 It's not Chelsea, but Milan does have a flower show of its own in May. Called Orticola. Well, OK, not really a flower show, more a trade fair. There's no competitive element, and very little going on other than nurseries and other garden related organisations displaying and selling their products. I did see one demonstration of bouquet making, and there were a couple of areas dedicated to kids, but apart from that it was "just" commercial stands.
Which didn't stop me having to queue for fifteen minutes to pay my 7€ entrance fee to get in. Half of north Italy seemed to be there - making for a bit of a crush in the relatively small area dedicated to the 130 stands inside. I'm still not exactly clear about why I should need to pay for the privilege of having people sell me plants, but I stood dutifully in line to do so. 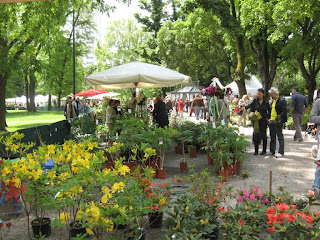 And, mean streak aside, it was worth it. I saw plants that I'd never be able to find in our local garden centre - and, mercifully, very few that I would. A couple of stands had stock balcony plants -pelargoniums, tagetes, surfinia etc - but always unusual varieties. And the prices were very, very reasonable, making me regret the fact that I'd been terribly strong when I was still at home and taken money out of my purse rather than putting it in... The easiest way to resist temptation, I thought.
Anyway, I wandered around going oooh and aah for a couple of hours. There were a lot of stands dedicated to one plant only. The hydrangeas in the top photo were probably my favourite, while the azaleas below were predictably "in your face"... 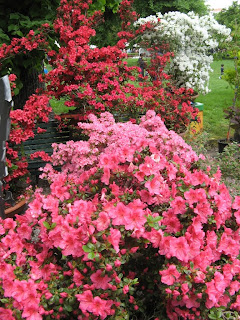 And there was even an entire stand dedicated to nasturtiums ... 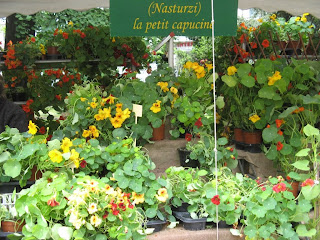 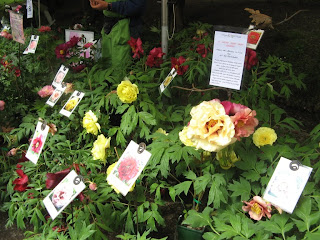 .. great for winding round the maypole. Or is this supposed to be some sort of bridal bower? 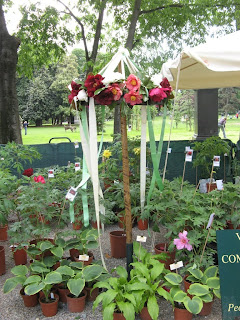 There were some more original stands though. If you fancy having chickens in the back garden but are afraid the neighbours will complain, how about these ... 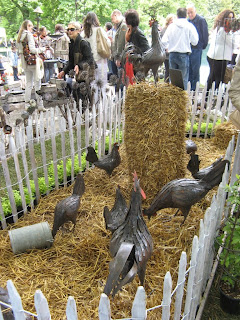 And if you keep a dog outside, how about a green roof for his kennel? 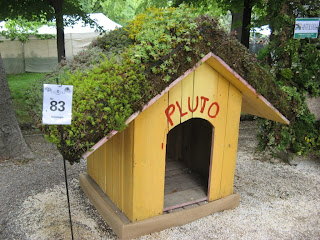 The same stand also had an amazing green wall - unfortunately, it was so amazing that it was surrounded by hordes of people, making it really difficult to get a decent photo. 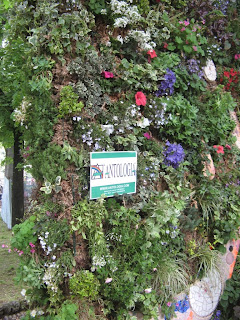 But I think the stand that wowed me the most was this one, dedicated to water features. Don't know how much luck they had in selling - with the mosquitoes we have here, no-one in their right minds would want a water feature in their garden. But, at the back of the stand, was the most amazing plant - Gunnera mannicata. Not, sadly, right for the balcony. But I stood and looked at it for a long time. Double click on the photo to understand better why it grabbed my attention. 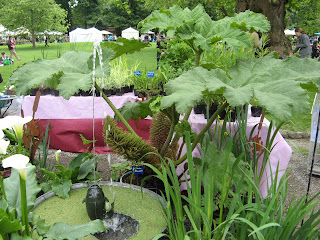 So what did I buy? Well, I was very restrained (apart from not taking very much money, I also had to carry them home on the bus). But I did come away with a couple of salvia faracinea - my attempts to grow them from seed failed miserably this year - two astilbes, one white and one pink, and a heuchera. Not bad for 25€. 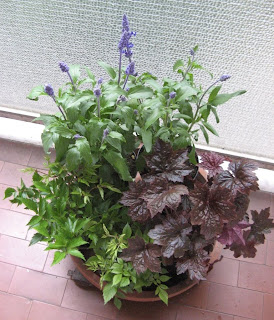 And then there's always the catalogue. It has the web addresses of all the exhibitors in it. And a lot of them seem to sell on-line ... tee hee :)

Sounds like you had a lovely day out! You showed amazing restraint ... if I didn't have cash, I would get the debit card out. Love those nasturtiums -- and the chickens gave me an idea for my collection.

Love the green roof on the dog house! :) Looks like a place where I could get completely lost...and I like your purchase, too. I'm making room for some heucheras this year.

Lovely and gorgeous flowers, especially peonies and azaleas! I love the dog house with a green roof!

Ooh, you'll be able to buy a few more online then! Sounds like a lovely day out.

What fun! Thanks for letting us (virtually) tag along with you!

A trade fair ain't bad eather even if it's nice to visit a great flower show. It looks like you had a great day / gittan

Another opportunity missed. I always hear about these things after the fact, but perhaps just as well because I'd probably have my husband a crateful of plants out of there. How are you fairing with this wretched weather? Basta acqua! The weeds don't seem to mind much though.

What a wonderful day you must have had!

As for your question, Google gave no explanation but I won't complain. I'm just glad to have it back :)

Diane at My Cottage Garden said...

Gorgeous photos! I will be back to check out your blog in greater detail soon. Thanks for the welcome. Cheers from Canada. Diane

Window On The Prairie said...

Love the doghouse - cute. Don't care for the fake chickens either. To each his own.

I can't believe you had all that restraint. I should take a lesson! It looks like an amazing "show." I also can't get over how green and lush looking it is there ~ our trees are just beginning to fill out so I notice those things!
The dog house roof and the water garden area are especially fabulous.
Thanks for visiting me the other day too.

hi, you have nice blog.. u can view also mine..http://akoniwares.blogspot.com