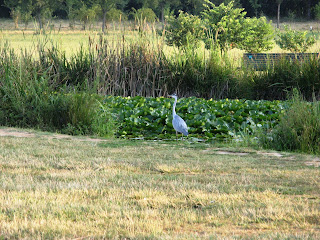 It has been so hot here. Daytime temperatures have been up in the high 30°s C (97°F+), with humidity at around 50% plus. One night at 3.30am when I couldn't sleep, I checked and the temperature in the house was 31°C (88°F) and the humidity had reached 86%. Plants have been wilting fast, and so have people. We daren't open the windows at night because of the mosquitoes (including tiger mosquitoes) and so fans and air-conditioning have placed such a strain on the electricity supply, that blackouts have been frequent.

The only time that it has been possible to consider doing anything active has been around dawn (anti-mosquito lotion having been applied.) So just as it got light one day last week, Anthony and I grabbed the bikes and headed for the Parco Nord.

We weren't the only ones with the same idea - joggers, dog-walkers and other cyclists were out in force, despite the time of day. But not enough to frighten off the wildlife, which was also taking advantage of the few hours respite from the heat. We headed for the ponds, where we saw moorhens, turtles, shoals of fish, swallows and this grey heron. 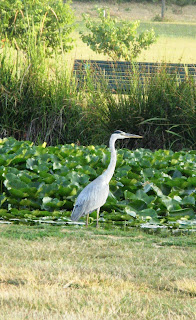 We got quite close, and he didn't seem too fazed. But then he must have decided that enough was enough, and took off ... 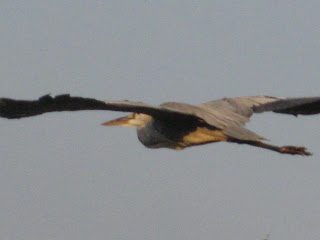 Lombardy has two types of heron - the large

Grey Heron that we saw, and the Little Egret - a smaller type, completely white in colour. Both types are fairly common in Europe (as well as Africa and Asia), but because Lombardy is an important rice growing region (the largest in Europe), they are particularly common here. They hunt in shallow water and, whether near rivers, canals, ponds,or flooded rice fields, both types are fairly easy to spot wading through the water in search of the frogs and fish that are their main prey.

I don't think I've ever seen one quite so close up though.

Labels: Birds and Wildlife, Off the Balcony, Parco Nord, Parks and Gardens

I love the photo of the heron in flight Sue, a beautiful shot, and an experience I'm sure it was worth getting up early for. We have a similar heron here, the Great Blue. Tall, gangly, and they nest in redwood trees of all places. The first time I saw a bird that large perched on a tree branch, I thought I was seeing things! :P

Hi Sue: Has been hot here also, a little cooler now. Birds are a popular subject here in New Hampshire. Great Blue Heron one of our favorites.

Have a wonderful day,
John

Where are you? Is it Parco Nord because you are clearly not on your balcony!

Hi Sue, It's been really hot and dry here. But then, I live near the Equator. There are a whole lot more mosquitoes compared to butterflies lately :)

Nice shot for the heron. I've never got a good shot for birds.

The extremes in temperature are something else, because we've been waking to a shivering 18°C and of late it hasn't gone much higher than 26°C during the day. Please let it not be fall already! Even the mosquitos seem to be less in numbers. This is actually worrying me because I need heat for the garden!

Hello Sue, It seems that weather has gone berserk all around the world. I too go out very early in the morning before it gets too hot. I'm not likely to see a heron here, though. Your photos are beautiful. Pam x

Goodness, poor you. That's much too hot for sleep!

You have some beautiful birds where you live. Would you beleive I actually see egrets out here in California. But the neat thing is I don't even think I'm really out here by water. I have even seen some by the freeway offramp. Interesting. Ducks I see every now and then, flying overhead. And geese too.

it must be nice to get close and take photo. Egrets are the more familiar birds here in Malaysia, and they love swampy areas..and rice fields. ~bangchik

What a great photograph. I love Herons theyre so striking, unfortunately I only ever get to see them sat in friends ponds eating their fish - not a welcome sight!

But I hate word verification :)