Yes, I know I'm the only person left in the world who still puts an apostrophe in Hallowe'en, but then I even use full words and capital letters in my SMSs...

It's crept up on me unawares this year. It's not an Italian tradition, and until recently passed unobserved. But then about ten years ago pumpkins started appearing in the shops at the end of October, as well as other Hallowe'en themed goods.

Until this year. Suddenly nothing. Not a pumpkin in sight, no witches, ghosties and ghouls... Nothing. Is it because shopkeepers found it hadn't caught on enough to make it profitable? Or have the

Catholic church's criticisms put people off? Not sure.

Oh well. Even if I've not seen any Hallowe'en pumkins in the shops, there are plenty of the edible kind around. And last night I made a pumpkin soup that came out so well that I thought I'd share the recipe - which I rather made up as I went along, so apologies if the quantities are a bit approximate.

1. Add the oil and the butter to a heavy bottomed pan and place over a medium heat.

2. Peel and chop the onion and the leek. Add to the pan and fry for a couple of minutes. Then cover, turn down the heat and let them "sweat" - ie they should cook slowly in the oil/butter and their own liquid, turning transparent without browning.

3. If you want to add in the hot pepper, chop and add it at this point. I did - mainly because I wanted to use the pepper's I'd grown on the balcony this summer. But I'm not a great fan of hot peppers, so I think in future I'd omit it. I felt it swamped the other flavours rather. Decide depending on your palate. 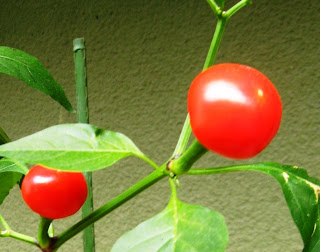 4. Meanwhile, peel and dice the pumpkin and the potatoes. Add them to the pan once the leeks and onions seem transparent, and fry for a couple of minutes - keep them covered and turn them occasionally.

5. Add the stock. I nearly always have home-made stock in the freezer, which I swear by as the base of any soup, but yesterday I found I didn't. So I added cold water and sprinkled in a vegetable stock cube. It worked.

6. While the stock is still cold, add the pumpkin, potatoes and borlotti beans. I used fresh beans, but if you use dry you'll need to have soaked them for at least eight hours previously. If you use canned (not advised) drain and rinse them first to get rid of the salt. At this point it should look like this ... 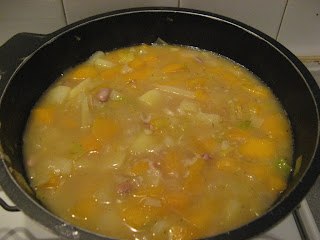 7. Add a small amount of curry powder - again this depends on how much you like it. If you're turning your nose up at the idea of ready mixed curry powder, it probably means you're into Indian spices and can produce a much better blend yourself. Feel free.

8. Simmer for about 45 minutes - or until the beans are cooked. Then tip the lot into a blender and blend until smooth.

9. Tip it back into the pan and add the peas (I used frozen). Simmer until cooked.

10. Add the milk, and salt and pepper to taste. Cook over a low heat (don't boil) for another few minutes.

11. Don a witch's or wizard' hat and enjoy with some good crusty bread.

Even with the pepper it was great, and I'm looking forward to trying it again without.

Hi Sue,
Pumpkin soup is always a winner with me, and I SHALL try your own recipe! Also, at last, someone who bothers about punctuation and capital letters etc....it drives my daughters mad when I criticise their SMS and email messaging!
As for the pictures of the soup, well, I am salivating already!

Mmm, that sounds delicious and just perfect for an autumn evening. I wouldn't add the hot chilli as I don't like them either, but I do add a chorizo or paprika pepper because that adds spiciness without being too hot, and this year we have lots having grown them on our balcony and in the garden.