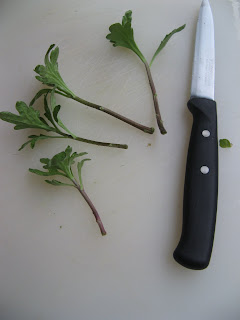 This year I've been experimenting with my chrysanthemums. I have some little yellow ones which I've been growing for years now. Every year I leave the old plants till early spring, and then take cuttings from the new growth. That's what all the books tell you to do, saying that the old plants will never produce such good blooms in subsequent years. Was it true? This year I decided to try it out. 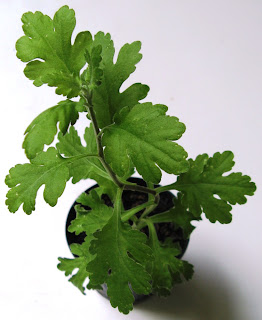 If you click here, you'll find the posts I wrote in March (when I took the cuttings) and May (when they'd taken and it was time to "stop" all them in order to convince them to put out side shoots). But I've reproduced the photos to show you the main stages. I took cuttings, but didn't throw the old plants away. Instead I planted the cuttings in the same container, in between the older ones. 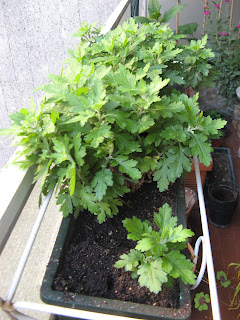 Why? well firstly to fill the gaps left by a couple that had died over the winter. But also to ensure that the soil, water, light and fertiliser conditions were identical for both sets of plants. As any primary school child will tell you, an experiment is only a "fair test" if one variable, and one only had been changed. In this case the variable was old plants vs cuttings. Everything else was identical.
Back in May, the new plants looked pretty puny in comparison with the old. But by the time autumn arrived, I could only remember which was which by going back to the spring photos to check. 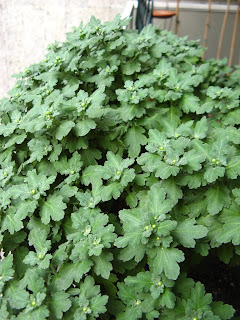 By October they were covered in buds. Whichever won, it was going to be a good year. And, when the buds opened, it was immediately clear that... 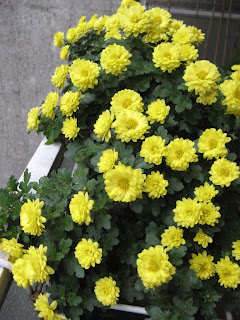 ... there was no difference at all. Both sets of plants are full of flowers, the flowers are all of the same size, and I can see no difference of any kind.
So will I be taking cuttings next year? Yes, certainly. But to increase the number of plants I have, not to replace the old ones. From now on, my chrysanths can go on for as long as they feel like it...
Posted by Sue Swift at 5:36 pm

Oh, thanks for sharing your results. Those flowers are beautiful!

Nice idea; until now I didn't know, that it's possible to take cuttings from these plants. Unfortunately all of mine became mildew in autumn - so I hope that they manage it to come over the winter at all.

This year I'm trying to overwinter my marguerites - they are not hardy - but it's not so easy, because they are weakening by now :(

What a great experiment... and thanks for sharing your results!
I so enjoyed reading your post.

What a lovely yellow one! I think my biggest problem with chrysanthemums is getting them under control. Mine aren't in pots and boy, do they ever take off!

I love your little experiment Sue, i was a scientist by culture, hehe, so it made sense. And the result is really fun, and the flower box resulted in an instant success! The only lacking there is your treatments are not replicated, at least 3 replicates will do, to eliminate the unobvious error. Just for fun not for anything else.

Thank you for sharing, I will try like you.

That was a good experiment! I will definitely try it on my own mums. Thanks for a great post.

I really enjoyed reading about your experiment with Chrysanthemums. Time I made space in my garden for this lovely plant. Alistair

gardening is such a journey of discovery...

I have been hearing this wives tale for years and always wondered--now I know. Thanks, Carolyn

Fantastic experiment and interesting findings. I find that mums planted in my garden tend to die out after several years. I wish I would've taken cuttings before the hard frost, but will remember to do so next year. I love increasing my plant inventory without paying a cent!

Hi! I have purchased cut flowers (chrysanthemums) and stuck them in a pot. They continue to grow. I love propagation. It's an addiction. :)

Great success story Sue! You make it look so fun and easy! Beautiful to see these right now, when all is see is gray and muted green in the landscape.

Glad that you experimented.I never took cuttings from mums and now I will.

What an amazing informative site. I've been looking at some of your older posts and learnt so much. I will have to come back again and again.

You have a green-thumb! I adore those people who can make plants grow into beautiful one. Can you share some tips on how I could do one of that?