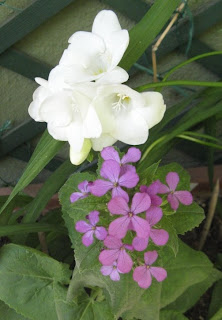 Last autumn I posted about some mystery plants which had suddenly started coming through in a large container on the front balcony. They were obviously some kind of bulb, but I couldn't for the life of me remember putting anything in there. What were they? Jan suggested "Those ones with the orange flowers, and I said, pseudo-knowledgeably, "Oh you mean Montbretia" - although I realised later that the picture I had in mind (and I suspect that Jan did too) was Crocosmia.
I love Crocosmia, so it was quite likely that I'd planted them. And the long sword-like leaves looked right. So crocosmia they were, I decided. And when the flower buds started to show, I was even more certain - long flower spikes with buds along the stem. They looked as if they were going to bloom around about the same time as the Honesty that was in the same container. Orange and violet - hmm, that would be noticeable.

They're now in bloom - and what have we got? Freesias. 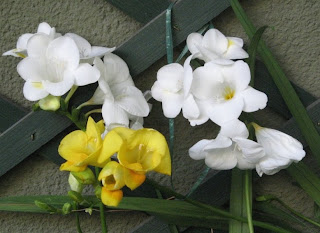 Yellow white and purple ones - which go very nicely with the Honesty. So perhaps I planned it all along. Who knows? I still don't remember planting them. But they're very pretty... 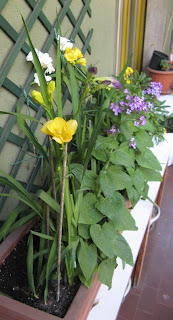 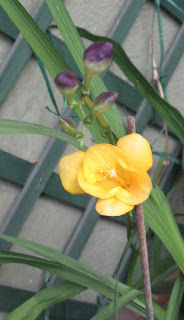 It's always nice to get surprises. Especially ones as pretty as these!

Freesias, gorgeous to have them flower so early Sue, we have to wait until June here in Aberdeen. Crocosmia/Montbretia, same family, I love them also.

I'm glad you've found out what they are at last! I've just had a Google and it says that montbretia and crocosmia are one and the same.

I suppose it's nice to know that even your subconscious, which is going around planting things without telling the rest of you, has good taste. That's really a lovely combination.

I love fresias. I used to grow them in California, but can't here in Montana. Sigh. It sounds as if you did have a purpose in mind when you put those in the planter, even if you'd forgotten it by the time they came up. Nice.
--Kate

This is sort of reminding me of what bulbs I stuck into the ground in December. I swear that it was all pink tulips but what do I get? All white ones! So much for my Hello Kitty color scheme.

Pretty neat. I also have some bulbs my aunt gave me and I have no idea what they are. I just started growing them so I probably have to wait a few months before I see it bloom.

Nice surprise Sue. I would love to have fressia I don't have to get at a florist. Pretty box planting.

No matter what they are...they are beautiful! And I imagine the fragrance on your balcony is enchanting!

HI Sue: Surprises in the garden are wonderful. Never know what will pop up plant or creature.

Have a wonderful day,
John

They surely are pretty! At least you didn't weed them out as I have: more than once I planted seeds, then forgot, and pulled out "the weeds".

Beautiful flowers .... I luv them