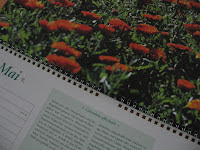 The flower on my calendar this month is calendula officinalis. It’s a plant I’ve never had much luck with – it germinates without problems, but however much I pinch out the growing tips, it seems to end up looking gawky, straggly and out of place in the container. My local garden centre manages to get them to be low-growing, bushy and compact, but I’ve never quite worked out how. Different varieties maybe, though otherwise they look the same. And then it seems to be very prone to attacks by powdery mildew – ironic as one of its uses is supposed to be as an anti-fungal agent.

According to the calendar it has been used medicinally since the time of the ancient Egyptians. It has anti-bacterial and anti-inflammatory properties and can be used externally against a variety of skin complaints – acne, eczema, boils and abscesses, minor burns and other wounds, nappy rash and chapped hands or lips – and also against haemorrhoids, strains, bruises, varicose veins and what I think might be housemaid’s knee. But don’t quote me on that one as I’m making a wild guess at the translation.

The useful part of the plant are the flowerheads, which are gathered from June to September – best according to the calendar between 11 and 12 o’clock – and dried before use. They can be prepared in various ways, of which the two simplest are :

The best English account I’ve found on the web is at Plants for a Future, though as ever Purple Sage is also very good. These two also list other medicinal uses – against stomach ulcers, bad circulation and various other ailments. They also mention its use in cooking – the leaves can be used in salads, and the petals used as an alternative to saffron to colour soups, rice etc.

Found your blog by accident...really interesting.

Thanks Ruth - come back again soon! I had a look at your blogs too - you have a lovely garden and I'm envious of the poached egg plants. My only ever attempt to grow them was a dismal failure.
Sue