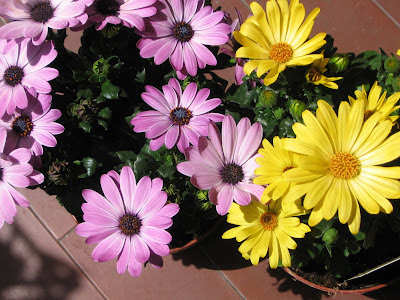 Despite being here for over thirty years, I can never get used to the fact that Mother's Day is in May and not, as in the UK, in March. So it always creeps up on me as a surprise. This year the surprise arrived in the form of these osteospernum (Cape daisies).
I've never grown them before so I've had to look them up - haven't come up with much information, other than that they're perennial, like to be fed and will go on blooming all summer if dead-headed. They like a mild climate - minimum 2° - but I hope I'll be able get them through the winter on the balcony by positioning them close to the wall and covering them up. They also seem to be known as Dimorphoteca.
The two plants were actually produced by two different growers, and on the label of the yellow one, it says : Multiplication only allowed if licensed through GPL. At first I thought GPL would be the name of the company and that it was a new variety produced under trademark, but when I looked, it doesn't seem to be. Does anyone know what it stands for?
Posted by Sue Swift at 12:39 pm

GPL stands for General Public License - and nobody is going to kick if you do some for yourself. It is aimed at the protecting themselves from other grower/breeders. Legalese. Enjoy them!

Thanks Doug. Yes, I'd kind of guessed that I was unlikely to get a dawn raid from the plant police if I took a couple of cuttings for next year! But it's nice to know ...