Birds in the Garden 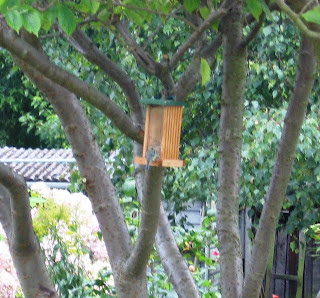 What are the most common birds in a South London garden? If you'd asked me thirty years ago, the answer would have been sparrows. Closely followed by starlings and pigeons, with a good smattering of blue tits and great tits and the odd chaffinch. There were also crows and thrushes around, and of the territorial birds, our garden always had its resident blackbird and robin families.

When the decision was made to turn the park behind the house into a wildlife reserve, the types of birds we saw started to increase. Greenfinches became common, as did magpies, and we'd also quite frequently see woodpeckers, nuthatches and various other birds.

When I went back this year, I was shocked to see how things had changed. Not only had the types of birds changed, the overall number was far lower. In particular, all the time I was there, whether in the garden or the park, I didn't see a single sparrow.

This surprised me so much I checked it out on the web, and yes - the sparrow population of London has dropped by ten million overall in Britain, with the population being reduced by 70% in London. That's an amazing number of birds to disappear. But why? The articles I found (look here and here) seem to blame it on the fact that increased urbanisation and the use of pesticides mean less available food. But in our area, that doesn't seem to make sense - nothing has really changed. And London is certainly much greener than Milan, and here they're all over the place.

Of the others,the only ones which seemed to be thriving were the crows and the magpies. Others that still seemed to be around were the tits, the pigeons, the robins, and to a lesser extent, the starlings. But in reduced numbers, despite the fact that we put food out for them.

I did, however, see one bird which I'd never seen before, while I was walking through the park. A kestrel! Not something that I'd ever have expected to see in the city. If birds of prey are moving in, it might, of course, help explain the drop in numbers of the smaller birds. But surely not to the extent suggested in the articles.

We also have a new contender for the most common bird in the garden - and it's one no-one would have guessed at ten years ago : the rose-ringed parakeet.

They've been becoming more and more common in various areas of Britain since about 2001, and in our areas are now the uncontended champions of the bird population. They fly in great flocks of ten or more birds, and land to feed on the garden fruit trees, screeching like crazy. No-one knows where they originally came from - though there are several urban legends : that the original pair escaped from a cargo ship which sank near London, that they were set free by Jimi Hendrix ... and so on. They have no natural enemies in the area, and breed exponentially. They live up to 35 years, and produce two chicks a year.There are now estimated to be thirty thousand in London, expected to rise to 50,000 by 2010. 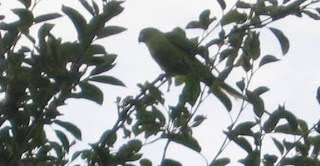 I love watching them in the garden, though my attempts to photograph them were, as you can see, fairly pathetic. But they're not universally loved, mainly because of the incredible noise they make, and the fact that they go for the fruit trees. They may also be the reason why I didn't see any woodpeckers or nuthatches who, like the rose-ringed parakeet, nest in holes in trees and would therefore be in competition with them for nesting spaces. from what I heard every night though, the owls are still holding their own. So the RSPCB is considering a cull.
They say it's a last resort, and I hope it won't be necessary. But even if they do reduce the numbers for a while, I suspect the rose-ringed parakeet is here to stay.
Posted by Sue Swift at 11:35 am

It would seem if they were going to try to do anything about any birds, it would be to cull out the rose-ringed parakeets which aren't "native".

It's too bad that the bird population has dropped in your part of the world. I wonder if they are going to keep these birds from taking over.