It's Gardener's Bloom Day again (it seems to come around awfully quickly). So here's what's blooming on the balcony this month .... 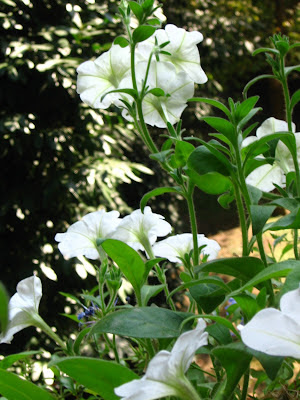 Surfinia. I'm proud of these because they're the ones I grew from seed this spring. It took them a while to get going, but now there's a profusion of blooms. We're having a very hot September - although the mornings can be chilly, it's still up in the eighties by the afternoon. So I hope they'll go on for a while. Only the white ones made it, although the seeds were mixed white and purple. 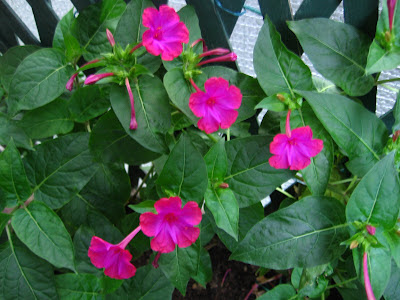 Mirabilis Jalapa - the Four O'Clock Plant, Beauty of the Night, or whatever it's called round your way. Like the surfinia, these came from seeds saved from last year's plants. They've bloomed much later this year than last, and I haven't got the same profusion of blooms that I had before. But I'm enjoying them. Pelargoniums - red, salmon and white. My salmon pelargonium has now bloomed continuously for eighteen months. Will it take this winter off, I wonder? 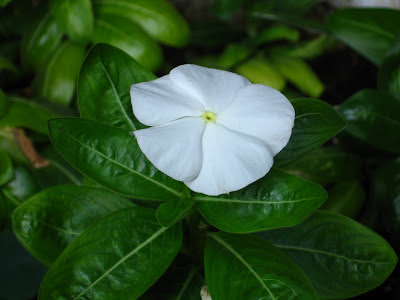 Periwinkle. Useful on the balcony because they don't get ravaged by pests and diseases, and are good for filling gaps in containers if other stuff dies off. And talking of pests ... 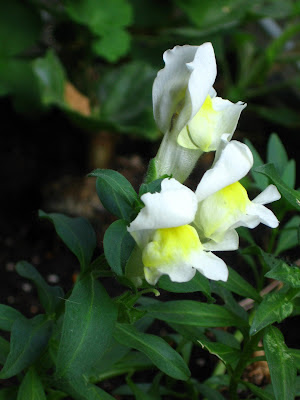 The Antirrhinums seem to have got their second wind and are blooming again. But so have the caterpillars. I didn't actually notice we had visitors until I printed out the photo. Campanula - OK, this one's a cheat. I saw it in our local supermarket last Saturday and couldn't resist - it's the same variety as the one blooming in my London garden. Call it nostalgia.

How lovely all your blooms look. Periwinkle on a balcony sounds like a very good idea.

BTW my blooms are up too for GBBD.

What a wonderful group of blooms on your balcony. Thanks for participating in Garden Bloggers Bloom Day again!

You have a lovely collection of white flowers. Your balcony garden must look especially pretty in the evening.

Thanks for the link, dear Sue!

Your Balcony Garden looks simply fascinating. Its sheer igenuity to convert a balcony into a garden.

Our blooms do look similar, I too had posted the white Periwinkle in the Aug GBBD post.

It's been chilly in the mornings and evenings here as well. The blooms are pretty.

HI, I have a question, i just recently bouhgt 4 o clocks Mirabilis from my sons school - they are bulbs and look like carrots, which end do i burry the skinny end or fat end? Thanks for any iunfo u can give me! :)

HI I recently boutgh 4 oclock mirabilis from my sons school, I have never planted these before, they are bulbs and look like carrots, my question is does the smaller end get planted or the fatter end, they came with no instructions, any help would be great! Thanks!! :)

Hi Roxanne.
Plant it pointy end down, but cover the whole thing with soil. I'd get them in as soon as possible - mine are already coming through strongly. But where you are may be colder than here.
Let me know how it goes!
Sue