And on with the carnival...

Welcome back to the Carnival. I didn't have time to post on Thursday, and stretching Carnival any longer would be pushing it, even for Milan. So we'll have all the rest of the nominations today. 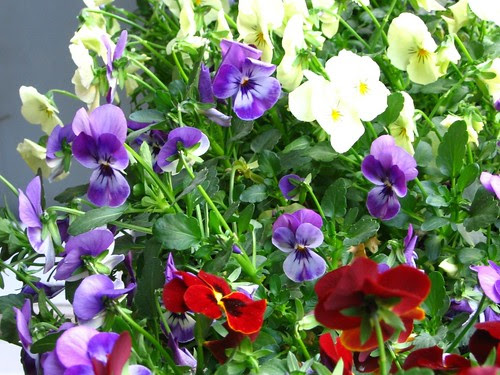 In 2006, before I started blogging, I had great fun seeing the weird and wonderful colour combinations that arose in second generation pansies, which I'd grown from seeds saved the year before. Single or bi-colour plants like those in the photo had combined to give a riot of colours, with blotches and stripes everywhere. So it was great to receive Matron's nomination of this post by Daughter of the Soil on her Purple Pea Project - a great explanation of genetics and the problems of seed saving.

Lots of nominations focused on posts with great photos. Have a look at this archive from Nature Girl. Ladyluz nominated the first post on the page, but I was struck by some of the photos further down. So scroll and enjoy!

Gardenmoma also went for photos, nominating a post from Bliss in the Netherlands from last December. If like me you're a sucker for ice-storm photos, check this one out.

One of my favourite poems is WB Yeat's The Lake Isle of Innisfree. It starts :

I will arise and go now, and go to Innisfree,
And a small cabin build there, of clay and wattles made:
Nine bean-rows will I have there, a hive for the honey-bee,
And live alone in the bee-loud glade.

Jodi, in Nova Scotia, drew on the idea for her post The Bee-Loud Garden, nominated by Kris of Blithewold. Don't miss the photo of the lavatera.

My own nomination? In 2006 Sue of Lodge Lane Nursery won the BBC Gardener of the Year competition. She wasn't allowed to talk about it at the time, but once the programme was released she posted a blog that she'd kept day by day during the competition. It was winning the competition that allowed her to buy the nursery which she now runs and turn professional.

To read it properly, read the first post on the page first and then scroll down to the last - ie the earliest - and read up.

Shortly after I'd announced the idea of the Carnival, Angie of Gardens and Junk contacted me nominating a post by Andee, the Gardener in Chacala. Shortly afterwards, as many of you will know, Andee died. So I'd like to finish with the nomination for Growing Luffa Sponges in Chacala, a post that - as always - showed Andee's interest not only in plants but also in the people around her. Rest in peace Andee.

What fun! I got bogged down with other things and didn't get a post nominated after all, Sue, for which I apologize. And it was a kick to go read my own post from last August. Mmmmm....August....when there was green grass, and flowers, and warm air...NOT SNOW! Sigh.

Thanks for stopping by Sue. Sorry I've been neglecting my blog-pals, but there is so much to do and the countdown has begun in earnest, now I've finished work!
Will be sure to post when the 're-potting' has occured! SWD.

Sue: What a nice way to meet you! I also was away most of the week and delighted to follow the trail to your posts! I will add you to my favorites! Reflection is fun!

I love the red pansies!

Jodi - we missed your nomination! but never mind - maybe next time ...

She who digs - (for those of you who couldn't decipher the message SWD is about to have a baby)- you'll be able to tell if s/he's going to be a gardener : if s/he's early it'll be because s/he knows it's time to start sowing :)

Layanee - I shall be a regular visitor from now on. Your blog is great.

Mightymatt - I thought it was only me who found peace by standing with a hose at sunset. Now I know I'm not alone!

Sue this focus on our many posted archives is a wonderful treat! I rather enjoyed and must admit forgot about the many posts that I have published and you gave me a opportunity to look back at mine as well other garden blogger posts!I enjoyed meeting the folks at the links you provided! I certainly appreciate Ladyluz for entering me in this celebration! I am delighted to meet you! from a now frozen Canadadian garden ..hugs NG

Stuart of Blotanicals has written to say I've been "faved" by you. Many thanks, whatever it means it's gotta be something good!