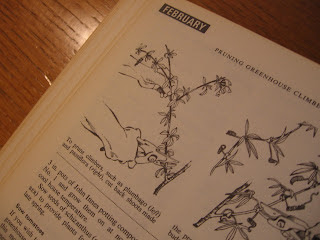 I have a ritual at the beginning of every month. I grab my copy of the Reader's Digest The Gardening Year and spend a while poring over the section for that month to see what I should be thinking about doing. I have to adjust a bit as it's based on temperature conditions in Britain, so I generally have to check out the following month too. The official average temperatures for the month are minimum O° and maximum 8°C (approx 47°F), but this winter and last have been so mild that the real temperatures have been considerably higher. I wonder though if I wouldn't have to make changes even if I were in Britain. My copy of the book was inherited from my Dad, and it dates back to 1972. Given the climate changes there have been since then, I suspect a more recent edition might tell a quite different story. Checking on Amazon it's now called New Gardening Year and is a much glossier affair than the sober text I have. Does anyone have one? It would be fun to swap photocopies of a few pages to see what the differences are.

In any case, it's been really mild this year, even for here. No sign of the Giorni del Merlo, supposedly the coldest days of the year. Last weekend we reached 14°C (about 57°F), only a degree short of the January record. And it's sooo tempting. Could I get a few seeds in and get a headstart this year? But a look at the forecast for this week dashes all hopes - we're going to have an average of 4-5 degrees, and it'll drop to 1 degree some nights. What was I saying about exceptionally mild weather? Forget it.

So what could I be doing? It's certainly time to start clearing up, and that's probably going to take me a while. There's dead stuff in quite a lot of the containers which needs yanking out, and those that I can empty completely will need washing out and disinfecting to make sure that any fungus or virus diseases don't get carried over to this year's plants. Those containers which I can't empty will need at least a partial soil change.

I also want to move a few things. Remember my stunted hollyhocks? They made it through the winter with no problems, and today I moved them to the container on the front balcony where the previous year's hollyhocks had done so well. I suspect the problem was a mixture of late sowing and wrong position, so we'll see if they come on better this year. Other things just need routine repotting.

And then there's the balcony itself. The railings need a good wash before I put the containers back, as do the little tables and shelving which the inside containers sit on. Not my favourite job.

The Gardening Year doesn't suggest there's much I should be doing this month - it seems to concentrate on treating lawns, cutting hedges and pruning fruit trees. But it does also say it's time to prune the plumbago. I'm a bit shall I, shan't I about that. I usually do, but I have a neighbour who clearly doesn't and hers always blooms much earlier than mine. Mine then catches up, but as I'm often not here in July and August, it means I miss the best of it. Maybe I'll leave it this year.

TGY does tell me that I can get my tomatoes sown this month, if I can keep them at16°. I hope that means 16° or more, because they'll have to be in the house where the temperature is higher. But I'll give it a go. That will be the first step in this year's attempt to create a kitchen garden on one of the balconies - and having never grown vegetables in my life, it's a whole new ball game. More about that in future posts, but expect frequent appeals for advice.

But if it does stay mild, by the end of the month I shall certainly be thinking about chrysanthemum cuttings. I saw today that the new growth is shooting up, and I don't want to leave it too late. A bit of warm weather and a position backing onto a radiator and they should be OK.

What about you? What's on your To do list for this month? I shall be posting on mine at the beginning of each month this year, so if you'd like to join in just post and leave a comment here so that we can find you.

Oh - and don't forget the Garden Bloggers' Carnival. It starts Tuesday, so you're still in time to send in a nomination!
Posted by Sue Swift at 5:59 pm

oh chrysanthemums! That sounds so wonderful! Will you make tea? It's very good with honey and small popcorns.

As for your stunted growth, it always seems they're the hardiest.

Hi FTHGT - I had no idea you could make chrysanthemum tea. Must try it.