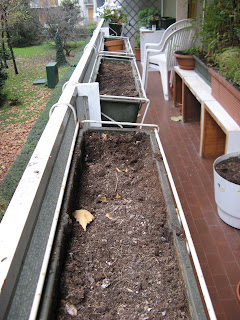 I finally got back out on the balcony last Sunday, spurred on by weather forecasts that promised snow. Snow. In Milan. In November. Were they joking? As the temperature on the balcony was 18°C at the time, and I really didn't need the thick sweater I'd put on, it seemed unlikely. But it was a good excuse to get on with all the clearing up I'd been putting off for weeks, and to move the stuff that had to overwinter close to the walls of the house, where it would stay warmer.

So I pottered around for a few hours, by the end of which the balcony was starting to look remotely as if it was cared for again, if somewhat bare. My motivation crisis has meant few biennials this year. And some of what I did put in didn't come up - my pansies, hollyhocks and foxgloves were a total failure. Out of the lot, I got one pansy plant. The only success has been a little container full of wallflowers, which are coming on fine. 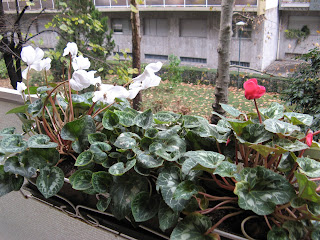 I was relieved to see that my ill-treated cyclamen had picked up again though. I moved them from individual pots into a single container, and they seem very happy there. All three plants are full of little buds just starting to come through. 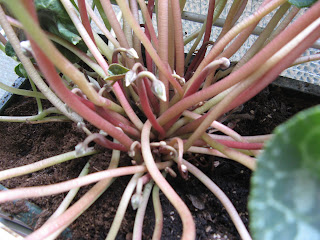 And then I came in, and went back to work.

So there I am sitting at my computer half an hour later, when I decide I'd like a cup of tea. I go to get up - and can't. My back's just seized up completely - a classic case of what Italians call il colpo della strega - the witch's blow.

How had I done it? I was fine when I sat down, and it wasn't until I tried to get up again that I even realised that it hurt. I can only imagine that I made the usual mistake of lifting things badly as I was shifting the containers around - something have no excuse for because I know how you should do it, I know I have back problems, and I know I shouldn't risk it.

Two days and a lot of ibuprofen later, I was more or less back on my feet. But for any of you who don't know the "rules", here's a summary from the Family Doctor site. When you have to lift something ....

But my protestations were to little avail and I was sentenced to two days flat on my back. I did consider an appeal based on the ruling I found on the Wellness site suggesting that following the the rules doesn't work at all, but I have to say the prison conditions were fairly comfy, and the time passed relatively pleasantly. The warder was very kind, and kept me supplied with plenty of reading matter and copious cups of tea. He was so kind in fact that I think the next time I have to shift containers, I might just ask for his help. Now there's a foolproof way to prevent back injury while lifting ...

Sorry ? Oh the snow. Well yes, it did arrive. There was a sprinkling that night, but it was more or less gone by the morning. And then on Friday it came back and snowed for five or six hours - just enough to send Milan into total chaos and cause havoc with the public transport system.

You know, I can hear you laughing all the way from Alaska ...

Labels: Health, Working on the Balcony

So very sorry about your back...I understand completely...and our city gets paralyzed whenever it snows even half an inch. so I won't be laughing from Tennessee! gail

Oh dear I hope your back's more or less better now and yes, you probably did twist while lifting - as you say, on a narrow balcony what else can you do! Look after your back now, because once hurt they are never the same again. I know. The only advice I can give, apart from scanning in and sending you some very good exercises I was once given, (which I will do if you like) is to pull your stomach in really hard while lifting anything heavy, and don't twist!

Oh, no, not again Sue. I remember earlier this year, or was it last year, you did your back in.

We never learn, we gardeners but you had me laughing about squatting down to lift. Like you, I would never get up again without help!

Get well soon.
PS while you had snow, we had hail stones...are we in for a hard winter.

Hi Sue, hope you're completely okay now. Glad to see that your garden is freshening up.

Morning Glories in Round Rock said...

I think anyone that gardens for any length of time can relate to your back problems. I try to limit my time in the garden--but it is sooooooo hard! I hope your back is all better now. Not only does a dusting of snow stop traffic here in Central Texas, but the phone lines too! Everyone is calling everyone they know to ask if they know it's snowing! LOL!

Yes, ask for help. Better than two days in bed and all that pain.

Hi, Sue--I've been catching up with your blog--it's so well written. I'm really sorry to hear about your back--I have bad knees, too, so I know I'm always risking the back--if only dirt could be lighter! I was really surprised to hear that Milan gets snow--but I'm glad you got some of your plants taken care of before the snow came.

P.S. I read your post on blogging wilt--it does seem overwhelming sometimes, especially for those of us for whom it's supposed to be a hobby. I'm glad you've kept posting.

Arrrrggg! The back again! You have the sympathy of this fellow sufferer. We gardeners are a stubborn lot, though.

Hi Sue, Just getting around to reading this--sorry it's so late after you wrote it. I just had to comment on your post and 'correct' lifting techniques! Oh, I did myself in by lifting large and heavy items over the years, digging and bending, etc. To the point where, I haven't admitted it yet on this blog, I am really limited now in what I can actually DO anymore. I was quite obsessed for years and never stopped but then suddenly, my neck, back and lumbar area all couldn't take it anymore. I spend more time now looking rather than doing, which isn't how I want to be. I just can't do what I used to any more;(
I hope you are feeling better by now! Jan

So, how's your back Sue? Hope you and your garden are recovering soon