Well, the north wind did blow, and then we had snow .. 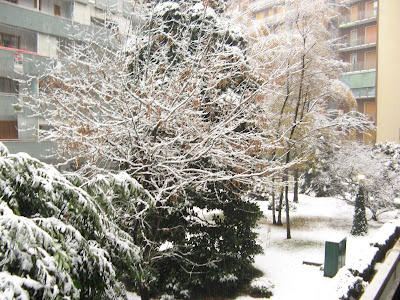 And when the north wind blows, we know about it. It sweeps down from Siberia, picks up the cold air of the Alps and then blasts down on us, usually bringing snow.

So we woke up on Wednesday morning to this, the second time this year.

It didn't last long - by mid morning it had turned to rain, and then it just teemed down for the rest of the week. A nuisance, but we escaped the problems that other areas have had. In the mountains people have been blocked in ski resorts because roads have been closed for fear of avalanches. Just outside Rome, 75,000 acres of farmland has been flooded while in the city the Tiber was at record levels and very close to bursting its banks - click on the link for a photo.

It's not unknown for the Tiber to flood - one article I read estimates that it happens every 50-100 years. But it's ironic that it happened just as EU leaders were meeting in Brussels to discuss measures aimed at reducing climate change.

Was it a success? It depends who you read. Yes, in the sense that it retained the threatened 20/20/20 policy : countries still agree to a target of cutting CO2 emissions by 20% by 2020, to reaching 20% use of renewable energy, and to a 20% improvement in energy efficiency. No, because of the concessions made to some of the countries with the biggest pollution problems.

With the economic crisis biting hard, industry is clearly lobbying harder than ever to protect itself against any measures which are going to cost it money. Under the original plan, all power plants were going to have to start buying "carbon allowances" from 2013, thus encouraging energy saving and a turn to cleaner sources. But for many plants this has now been reduced to paying for only 30% of their allowances at the beginning, the 100% target not being reached until 2020.

This mostly affects the poorer countries from the ex-"eastern bloc", many of which are still heavily dependent on fossil fuels. Yet these are exactly the countries which are the worst polluters.

It wasn't only the poorer countries though. Germany pushed for and obtained concessions, while Italy was at one point threatening to use its veto and block the whole process, objecting to the idea that it should be "only" Europe which was acting, while new economies like China and India continued undermining any effects that the European initiatives might have. Yet if the EU can't even get its own countries to agree to change, it's not clear why they expect others should happily climb on board.

So we have the same targets as before - but much weaker mechanisms for achieving them. That seems like a contradiction in terms to me, rather than the great victory that the Italians were proclaiming. The only attempt I've found at explaining how it might still happen was the BBC's cheery little comment that "CO2 emissions are likely to fall anyway if a prolonged recession brings significant plant closures". Erm ...

At the same time as the EU summit, there was a two-week a UN conference in Poznan in Poland - ironically, one of Europe's worst polluters. At first it seemed more positive. Al Gore was confident that the Obama government will have a far more active policy on preventing climate change than did the Bush government. Well, it certainly won't be less active, but apparently he's not going to think about it until at least the summer. Now, this certainly isn't something to be decided overnight - it's too important. but if you've known for a while that you might end up as president of the US, isn't it something that's important enough that you would already have thought about it? Especially when you know your predeccessor has already been dragging his feet for so long. Gore also pointed to the fact that some of the developing countries - like Brazil, Mexica and China - were coming on board, with pledges on restraining the rise in greenhouse gas emissions already in place.
But what has come out of both meetings is that the developing countries need money - money which the richer nations could provide but are often reluctant to do so. Some progress has been made - for example, Britain is providing £100m to help countries such as Indonesia reduce deforestation (see this article in The Independent). In addition, some funds have been provided to compensate poorer countries which have recently suffered from extreme weather conditions, such as flooding, for the impacts of climate change. But it's not enough - currently no more than $80m. And anyway, it's a different issue. It doesn't solve the problem.
Poznan is the half way stage in a two year process which will end with a conference in Copenhagen next year, and which is intended to be the "next Kyoto". Whether Poznan has been a positive step in this direction depends, again, on who you read. Hopefully, by then the States, unlike in Kyoto, will "on board". But will they be any more willing to go against the business lobby than Europe has been? And without strong commitment from the US and the EU, will the developing countries be interested?
Meanwhile, back to the weather. We had a short truce this morning. The torrential rain finally stopped - thank goodness as my son had a football match (US readers read "soccer") and would have been soaked as well as freezing to death. One is enough. But the forecast is for more heavy rain and snow, starting in the north and spreading south. I think we might just be heading for a white Christmas ...

Sue .. it get so mind boggling at times about what is happening to the climate and the economy of the world .. if i didn't have a chance to escape into my garden .. I would go MAD !
You are probably wondering what do during our long winters here ?
Well ... I DO go MAD ! LOL

You certainly are informed and have done a good bit if research and following of the air pollution and fossil fuels issue. I don't know all that you know...but I do know the following. Very clever how you put this in with your weather. You have always been very witty.

Did you know that our state of North Carolina in the US is not waiting on anyone! We are working hard toward being fossil fuel free and have our---or are cleaning our water-ways too. We are so ahead in this sort of thing.

Joy - I think we all go a bit mad at this time of the year. But here the bulbs are already pushing through. Only th tops, but a couple of months and things will be looking much brighter ... Hang on in there :)

FGG - Yes, I'm sorry, I did know that a lot of States have been "going it alone" despite the lack of encouragement at national level. I think I blogged about it once before. I think the problem is the lack of visibility - because of its importance the US doesn't only need to do something, it needs also to be seen to be doing something - and to use its influence (and cash) to encourage others to do something too. And it's that which has been missing under Bush.

Yesterday, Australia also announced it was committing to a 15% reduction in emissions by 2020. Every little helps ...