Death of a Tree 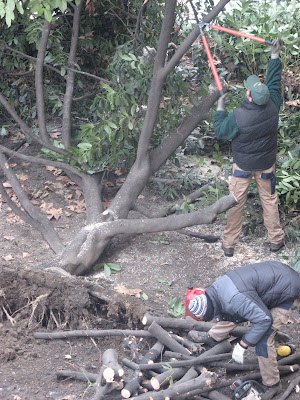 It started with the sound of a chainsaw. Tuesday is a day when I don't have to work early, but a high, whiny buzz coming from the front garden woke me at 8am. What was going on? Were they lopping the trees in the garden? They come and do it about every three years, but it shouldn't have been this year.

I peer over the balcony wrapped against the -3° temperature in an old dressing gown inherited from my mother - I am too ashamed to say how long ago. And looking undoubtedly like the mad woman of Milan. And see two men attacking the laurel tree in front of the appartment. Whaaat? It's perfectly healthy, and at only about 15 ft created no problems. So why?

I wake up husband and pounce - he's one of the tenant representatives for the condominium and is supposed to know what's going on. Why are they killing my tree?

One groggy eye opens and says (I've deleted the expletives) I've been in bed with the 'flu for a week, don't know and the way I'm feeling don't care, go ask the caretaker.

But first I grab my camera to record the crime. And go to the end of the balcony where I have a clearer view. And see the tree is down ...

Not cut down. Fallen down. Brought down by the weight of the snow heaped on the broad, flat leaves. Remember the last post and the photo of the tree covered in snow and forming a white hump outside the balcony? That was the laurel.

But the weight was too much. And the tree had simply toppled over, uprooting itself. I hadn't noticed the first time I looked, because the view from that end of the balcony is obscured by the hedge. And the tree had fallen against a lamp-post, propping itself up as if nothing was the matter. 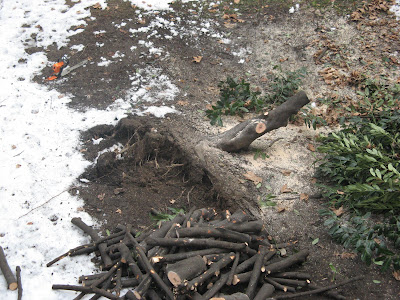 The men worked for about half an hour. At the end, they loaded up the branches on a lorry and left. My lovely laurel is gone. Killed by the snow.

Labels: Off the Balcony, Weather, Winter

So sorry for your loss, Sue. Laurels are such wonderful trees/shrubs. And since trees take years to replace (unless you have an extravagant budget), they're especially sad to lose. At least it didn't take your car out on the way down, though? Regards, VW

Oh I remember the laurel from your past post! How sad it had to meet it end soon! Hope they plant another one right there!

My commiserations! It must have been painful to find something, whose presence till some time back was for granted, gone so suddenly. But rejoice, for that is the law of nature. Old has to at some point of time make way for young, and I am sure something beautiful will pop up very soon.

That's very sad, I'm sorry. This winter has been terrible - strange weather everywhere. Laurel are quite slow growing, too, I think, but I hope you have other trees in your garden to make up for the loss. Soon it will be spring and you can grow new plants on your balcony too.

I am so sorry, Sue. Snow and ice have turned over several trees here in the past 20 years... trees down, large root-balls up on the surface of the ground... large hole gaping. It always makes me sick with sorrow. All that time invested in that tree... gone.

That's so sad, but at least it was at the hand of nature. It would have been even more upsetting if someone had done it on purpose.

It was painful to read your post. I can only imagine how you felt. It happened to us in our former home. I was horrified one morning to see a nearby lot with all the trees cut except for one huge oak. I went home to get my camera thinking they were going to spare the oak...by the time I got back, it too was lying on the ground. Clearly, the value of a tree isn't the same for everyone. Very sad.

I'm afraid to get someone in to prune the trees in our house as they take off so much. Hence my garden is very overgrown!
I can't imagine if the tree had to come down!
Go out and grab yourself some leaves to dry, (the logs would probably smell nice too).

Oh, it's a sad day when a tree goes down. Hopefully, they'll plant something better in its place.