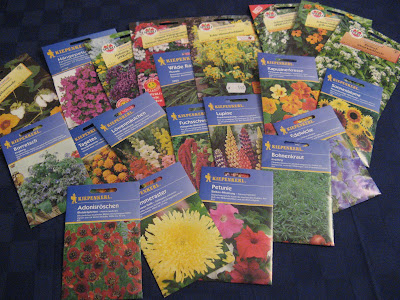 January. It's the time of year when I get itchy. Yes, I know it's too early. It's -4°C out there for goodness sake. But there they all are, sitting in their little paper packets saying Put us in, oh please put us in.
Rubbish. We're not saying anything of the sort. We're not ready. It's too cold and too dark. We won't do anything. Wait till March ...
I rake the blogs for posts about winter sowing. Ellen of How I Love to Garden is encouraging and points me to a couple of other good websites. But are the seeds I've got suitable?
I pore over the instructions - at some length and with a dictionary, because they're in German, fruit of a trip to the local garden centre while I was in Aachen over Christmas. It was January 2nd and it had snowed hard overnight. I was one of two customers in the whole place, and the other one was buying houseplants. The staff clearly thought I was stark raving mad to have turned out that particular day to buy a summer's worth of seeds.
April, sow direct. No good. March, under glass. March, under glass. Hmm, that's promising. As we're in Italy, maybe I could get away with it now. It's warmer here. ..
I grab one of my Italian gardening books and check the sowing times. March, under glass. Rats.
And then things start to look up. Cowslips (which incidentally in German have the wonderful name of Keys of Heaven) Sow in the winter months. Rucola, all year round. OK, now you're talking. Surfinia, Ivy-leaved Pelargoniums, Heliotrope : In the house or greenhouse 18°-22°, January to March. Yes! That's what I've been looking for ...
In the house or greenhouse. Heated greenhouse obviously. Don't have one of those on the balcony - it'll have to be the house. Time to clear the books off my bedside trolley table again, and push it up to the window. Ignore those Oh not again looks from the rest of the family as what they believed to be their home is turned into a nursery. They'll thank me later when the balcony's looking wonderful and I don't have to spend money on garden centre plants.
So we're off once more. Despite the fact that it's the coldest month of the year and light evenings are still a far-off dream, it's time to start. Spring may not quite be just round the corner, but it's coming. I promise.

Yes, this is THAT time of the year! My hands are also getting itchy...
Your balcony is lovely... It makes me think about my balcony from long ago. Once, my mother managed to keep a box with petunia, inside the apartment, through a winter (cut them down, not watering); next summer we had the best flowers ever... I can't believe how much snow you had! We had 30 sm, but you...
Thanks for your welcoming message.

I don't blame you for getting itchy to sow. For us, anything in the garden is out of the question today - we'd get blown over!

I'm completely with you. I bought some seed compost today I'm sure I'm the only person who ventured outside at the local DIY store. I sowed some last week which said they needed a cold period and some of the ones I received this week say sow as soon as ripe in the books so I figure I have better do those sooner rather than later.

I do feel better having fiddled around with some earth etc.

Oh no! Seed Fever! :-) Before you know it, we'll all be complaining about how warm it is...myself definitely included. But we've got a fair bit of winter to get through yet here in Nova Scotia. Given how the weeks seem to just disappear, however, it won't be long before we'll all be planting again.

I completely understand the itchiness to get something new growing, and my family rolls their eyes when I put pots in every windowsill to sprout seeds. Our problem is fungus gnats, which I can never get completely eradicated from the houseplants. The continually moist soil for seeds causes a proliferation. It's especially annoying when one flies up your nose when you're almost asleep! So here's to your seed growing, hopefully without any accompanying gnats!
Regards, VW

Thinking about spring is the only thing that gets us through January. Good luck with the seeds!

Ha, ha, cute post, Sue. Loved it! I think we all can identify with you.

Good for you, Sue! You should get going and make that table a nursery bed. And of course your family would love you for decorating your balcony and we'd too! Summer savory, sunflowers, and borage! My sis got that for me from Germany! I'm gonna sow that too now. Adonis! Wow! I can feel the tingling too!

Sue, your determination to get a move on things is to be commended;) I can tell you that you are way ahead of me. Here's to your garden, may it bloom early and long, in pots on your balcony--to cover up, down and around...to bring you, and hopefully, your family (!) much joy!

It's funny isn't it? Everyone, regardless of climate conditions, seems to get the planting/planning urge at about the same time. I'm oblivious so far (I STRESS, so far) but am working on articles about seeding, so it's only a matter of time before the urge comes to grub in potting soil and watch seeds emerge.

Once the seed packets start talking, it's definitely a hopeless case of spring fever! I have it too. I have the packets on my desk and find myself daydreaming about where everything will be planted.

You too huh? I have been trying to keep busy with other things but the Force is strong in the section where I keep my new seed stash. And there is a big, brand new sack of potting soil sitting just outside my kitchen door!

I need a Yoda garden "gnome" or something to keep me from crossing over to the "dirt" side too early!

I know the itch well!!! I have been circling hundreds of things in the seed catalogs. Im hoping to do lots of seed sowing this year. Thanks for visiting my blog again. I am enjoying yours as well!

You can set your seeds inside and pot them on inside if you have enough space and have them all ready to whip out once the weather warms up a little.I would think in Milan the weather gets warmer earlier?
It is one of the joys of winter gardening reading the seed packets and planning (dreaming)!

well, my hands are always itchy! however, in this part of sweden where it's cold almost 365 days a year, it's impossible to grow flowers on my own.

i do buy them in pots from flower shops. however, they die after a few months even if i try really hard to keep them growing healthy.

wish i can really grow my own plants like you!

you're right, the people around you will surely be thankful for the nursery... just when the flowers are looking very pretty!

have a great day..

by the way, hope you can also visit my blog... not as nice as yours but i am trying to make it good somehow. and we can also exchange links if you are interested.