Help - my tree is dying 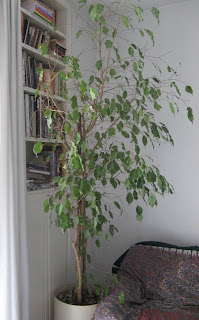 I've blogged several times about my Ficus benjamin tree. I got it about thirteen years ago when the company my husband worked for closed, and we "adopted" a pair of Ficus benjamins that had stood in reception (the only very small silver lining in a very nasty cloud). One died five or six years later, but this one has gone from strength to strength. It was already a well-grown tree then - not less than seven or eight years old, I'd estimate.
The tree has always lived in a corner of the balcony in the summer, and then in the living room in winter. Our flat is horribly dark - the disadvantage of having a building lined by balconies is that they block out the sun - so it's never been entirely happy inside and would frequently lose a few leaves just after it came in. But nothing drastic.
Until this year. It came in at the same time as ever, was placed in the same corner, and treated in every way the same as ever. And then the leaves started to fall. And fall. And fall. And it's now looking very bare and sad.
What went wrong? Did I overwater? Underwater? I don't think so. Is it just old age? I remember once coming across an article on the web which said they only survive in pots for about fifteen years, but I've no idea if that's accurate. It must have been pot bound for years, but it's already in the biggest pot I can manage.
I'm hoping it will hang on for another six weeks, when I'll be able to put it back outside. And perhaps with a bit of pruning and tender loving care, it may revive. I'll take some cuttings from the healthier looking twigs too, just in case. But if you've got any other suggestions, I'd love to hear them.
Posted by Sue Swift at 5:45 pm

Ficus do drop their leaves, if you
repot it again instead of trying to go up a size in the pot don't be afraid to prune down the roots and place it back into the same pot.
Ficus loves humidity, do you mist it? just because they drop the leaves it does not mean it's dieing.
Something had to have changed for it too loose their leaves

I've read that ficus don't like to be moved. That's likely why I can never keep them alive ... forever rearranging. Wish I could help more. Good luck'

I know that ficus are notoriously sensitive to being moved. It is almost a guarantee that they will drop leaves whenever they are moved from one spot to another. If you scratch the bark with your nail and it is still green underneath, the tree is still alive and will put out new leaves as soon as it adjusts. Good luck!

I do hope your tree survives, Sue -- perhaps it was just having some growing pains. :)

Sue, I feel for you and the ficus. They are delicate creatures...or is it finicky? I was going to suggest the same thing as Cathy. Trim the roots a bit and freshen the soil in a new pot.
good luck.
Janet

I was going to suggest the same as Sue commented about pruning roots and replacing old with fresh potting mix, plus misting. It may need to be top pruned a little if you do that. Good that you took cuttings. Our local daughter and son-in-law were successful with a cutting of their variegated ficus. I was impressed. It has done very well, of course it needs years to grow to a good size.

It's actually not so much the fact of a relocation as it is a decline in growing conditions: you can bring on leaf drop by letting them dry too much, getting them too wet, moving them to a spot that's darker (or colder), etc. etc. etc.

My Ficus benjamina behaved itself fine this winter, but at work, some of them (about half of the large ones we have) dropped a bunch of leaves, more or less all at the same time. My Ficus binnendijkii did the same thing at home, too, though on a smaller scale. In both cases, more or less stopping watering altogether until mid February stopped the hail of leaves, and now they all seem back to their usual selves and are eager to get back in the game and all that.

It also might be at the point where it's really honestly too rootbound to go on: I've heard it said (at Garden Web, by someone who more or less knows what he's doing) that it's possible for Ficus species to do just fine even when the pot is full of 90% roots and 10% soil, and this is probably true. But even if they can, it doesn't necessarily follow that they want to. Repotting, especially if you slice the root ball a few times when you do it, will often get them going again, especially if it's done while the days are getting longer.

I think you should try to cut it back and purhaps give it some new soil. Often they drop leaves in the winter and re´covers at springtime again. Now with those few leafes it doesn't need much water at all. I hope your tree will survive / gittan

Hi Sue, I have nothing new to add to the good advice you've already received, just wanted to wish you luck with your ficus. I hope it recovers!

God information i like it......Guys i think we should help to save trees....

Having read the comments I think all the very learned fellow bloggers have very aptly pointed out that there is nothing very ominous here; a little pruning of the roots and re potting in the same pot at an appropriate temperature should be enough o revive the tree. Best of Luck.

Hi Sue, just stopping by to read your latest post and discovered your sad little ficus tree. With all of the good advice and suggestions here, I do hope it will get well again:) I so don't like 'dark' winters...like you have:( I've lived in Heidelberg where it was in a valley and dreery much of the time. I have a sun light in the house, and some plant lights help too. I hope you get some sunlight real soon!

Hi Sue,
I've tagged you on my blog! Please drop by sometime,
SWD

Sorry about your Fiscus Sue. I do hope you can bring it back or at least get a cutting from it. It's always sad to lose a plant - almost like losing a close friend. Hope all else is going good for you. Keep us informed how it does. Linda

Strange to see a Ficus dying but again this could just be leaves dropping which is pretty normal. The tree is sensitive to strong winds or drafts and can survive with very less water too. Only, is sensitive to cold. Good luck with your tree. I hope it lives through.
As some suggested, pruning might help too.

I don't know which way your balcony faces, but could you try covering her with fleece during the winter months. (Our balcony faces south and it works with the lemon trees.) This way, when she recovers, you could put her in a larger pot and never have to move her again. (Whilst repotting, I think the advice you've already been given about cutting back the roots is a good idea.)

Hi everyone - and thank you for all your comments.
The idea about pruning the roots sounds sensible - but is unfortunately out of the question. After 20 years in the same pot the roots are so dense, I wouldn't know where to start. If I started pruning I think it would just topple over. And I can't repot - it's far too large to get it out (the other one which died years ago is still sitting in its pot for the same reason. I grow creepers up the trunk and dead branches!)
Leave it outside - I think it would be too cold even with fleece. I'll check what they can stand - but we have periods as low as -6°C here.
Ah well - we'll see if she survives. Cross your fingers!
I do mist, and it gets fresh soil on the top every year (is that enough??)

I wish I'd seen all this before my ficus died, several years back. But it does me courage to try again. Good luck with yours, Sue.
--Kate

just flow the water.... and some dry leafe to help the soil back to normal.... cause the soil its getting hard and the plant came unfresh or die.