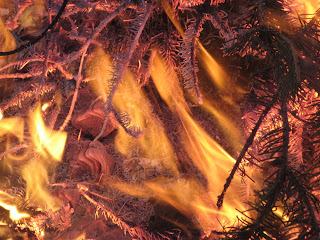 Bonfire. For me the word immediately brings back memories of being a child in London on November 5th - in a time before people thought about air pollution, and when safety was seen as a personal rather than a state responsibility. November 5th was bonfire night - Fireworks night, or Guy Fawkes.

It was a day in the year which I longed for, and as the days drew in and the nights got colder, excitement and anxiety mounted. What if it rained? What if we couldn't do it? 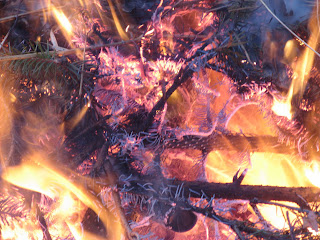 The weekend before, Dad would start to build the bonfire. Paper underneath, small twigs on top, then old bits of dry wood and branches which he'd been accumulating and drying all summer. And we'd make the Guy. Mum would dig out some old clothes which we'd stuff with newspaper to make the effigy that would burn on top of the fire. 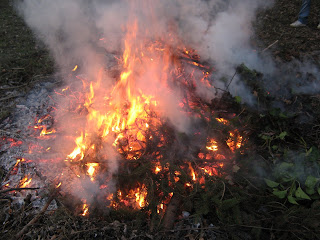 Yes I know. It's horrific, and now quite politically incorrect to even think of simulating burning someone to death. But we didn't really make the connection. For us, although we knew the historical roots, the guy was no more a real person than the scarecrow you make to protect your raspberries.
And I wonder now whether the real origin of the tradition wasn't quite different. Apparently, the word bonfire is a reduction of bone-fire and refers to the old Celtic tradition of burning animal bones at the festival of Samhain, to ward off evil spirits. Samhain is celebrated on November 1st (it's also the origin of Hallowe'en). And I wonder whether the burning of the Guy was not just an addition to a much older custom. 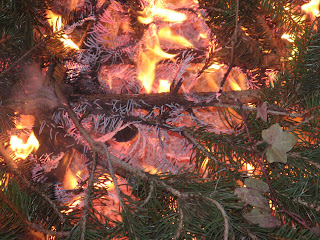 The day arrived. Goodness knows what the teachers did with us in school that day. I know our minds were only on the evening. And when we got home, time seemed to drag out eternally. Would 6.30 ever come? Would it ever get dark?
But it did, and finally Dad announced we could start. Coats, scarves, mittens, wellington boots and woolly hats were on in a trice, and out we trooped.
First came the worst moment - lighting the fire. Would it take? Had things got too damp in the last few days?
But Dad was a wizard, and sooner or later the bonfire started to blaze. First the paper would flare up. But would the twigs catch? A flicker of flame - please, please don't let it die. And then the wood would start to burn and the Guy too. We were there. 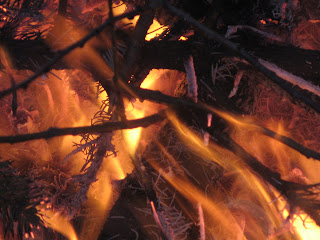 Once the fire was going, it was time to start the fireworks. Roman Candles, rockets launched from milk bottles, and Catherine Wheels nailed onto the poles which a few months earlier had been supporting the runner beans. And sparklers to wave. Sparklers were the only fireworks that we kids were allowed to touch. Only Dad had the matches, and if the kids weren't standing well back, then nothing happened.
And of course, it wasn't just us. there was a bonfire in all the other gardens too, and we'd eke out the fireworks by collaborating with the neighbours. You set one of yours off, then we'll do one of ours. And we'll all see everything.
And while we oohed and ahhed over the fireworks, we cooked our dinner. Sausages were speared on long sticks and held over the flames; potatoes and apples were set to bake in the embers.
Finally, the last firework had been set off, the last sausage eaten, and the fire was dying down. It was time for bed. And oh, how long it seemed until next year. 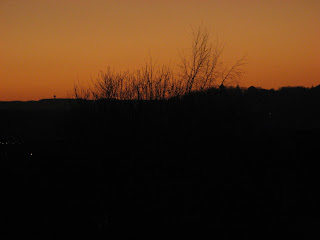 Why am I telling you all this? Are the photos really of fifty years ago? No, of course they aren't. But I've been tagged by She Who Digs for a meme in which you go into your photo archive, choose the fourth photo in the fourth folder and write about it. And because of the highly idiosyncratic way I label my folders, I ended up at the photos of when we were in Germany this Christmas. While we were there, some friends who live in the country invited us over to a bonfire barbeque. We started in the afternoon, but by six o'clock it was dark and standing round the fire in the freezing cold brought back all the memories. The photo below was the fourth in the folder. 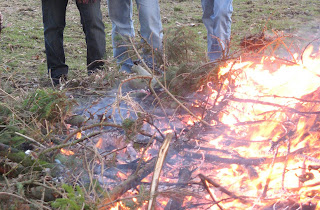 I'm supposed to tag another four people, but I'm not going to. Instead here's an open invitation. Have a look at your photo files. Go to the fourth photo in the fourth folder, and see what it says to you. And if you want to write about it, consider yourself tagged.

Thanks for the post, Sue! It brought my own happy childhood memories.

Hey Sue I just did a post on the
inspiration of yours, thanks

For me (maybe a boy's thing) I would set off on my bicycle the next morning or evening looking for spent rockets. It was so cool to find them with the long wood sticks intact.

Oh, what great fun! One of our best friends, who is Danish,has spoken of similar experiences in his childhood. Reminds me of my trip to Denmark and Sweden when we visited some of the places of memory. I'll have to dig through my photos..

I have been enjoying bonfires lately from all my yard cleanup after hurricane gustav, i love being around bonfires at night.

I always find bonfires quite therapeutic to watch. We always have a couple in the autumn to burn off assorted garden waste.

That brought back memories. We backed onto disused allotments and several families would club fireworks together, all us kids would help build a massive fire and the fireworks would be kept in biscuit tins for safety. Thanks for sharing.