Yuk - Who ordered that?

Yuk. As the physicist Isidor I. Rabi said when they discovered the muon - who ordered that?

The ancient Greeks called it hubris. Overweening pride and arrogance. The sort of arrogance you display by crowing in your last post about how the cool wet spring has kept the pests and diseases at bay. So that even when you go out and find a nasty attack of aphids, you're not phased. The plant's in a small container, so it's easy enough to bring it in and stick it under the tap. No problem.
But then you look at your pelargoniums and find this. Bleah. Where did that come from? And what is it? Rust? Doesn't look quite like the photos on the net. Oh well, not too many leaves affected. Cut them off and see what happens. 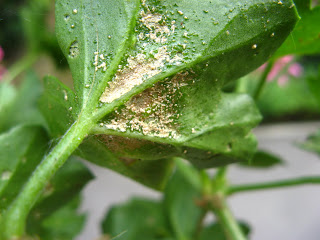 And then you walk on and find this. Some sort of leaf miner. They're all over the nasturtiums, and the mallow too. But easy enough to deal with - they're quite visible and you can just scrape them out with your fingernail. 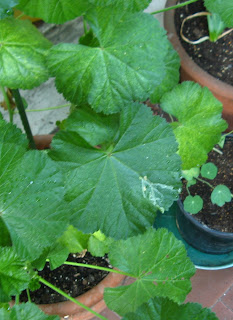 But erm - hold on. What's that sort of yellow mottling on the other leaves of the mallow? They weren't like that yesterday - no way. In fact I was just thinking how green and lush the plant was looking. And what a wonderful shape it was since I cut it back. And how stupendous it was going to look when it bloomed. Hubris. Oh, what hubris.

And at that point you start to panic and look carefully. And in the next container you notice there's a grey webbing all over the hollyhocks ...

And then you panic. Because you know what it is. 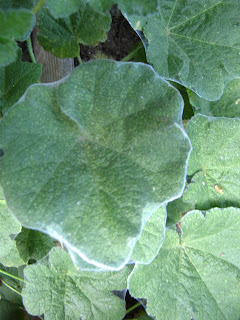 
They've done it again. Two days ago there was no sign. And now half your plants are almost dead. And now you really crack, and start rooting in the cupboard to see if you've got anything foul and chemical left over from last year. Nothing. So you rush out and cut off all the affected leaves, leaving the plants looking shorn and gawky. And spray with garlic solution and cayenne pepper - anything to keep them at bay.

But you know it won't work. Not when they've got to that point.

So the next day you're at the garden centre. You've done your best, but it hasn't worked. You've lasted a few weeks more than last year, but in the end you've cracked again.

Your post made me laugh... it shouldn't have though because it's horrible finding that your plants have been got at. I do try and wash/scrape/squash things off, but sometimes only chemicals will do for me. I'm going to hide now, before I get stoned!

My philosophy is to use chemicals sparingly, but I think they're needed sometimes! I really hate spider mites, too. Good luck with your plants.

Those Red Spider Mites is a pain in the you know what! Rubbing alcohol also works on killing them and their eggs. Good luck with getting rid of them.

Oh no Sue, red spider mites are the worst! And they multiply so fast. I hope you can catch them all. I hate to admit it but i spray them with pest oil simply because the damage they cause is so so so great. Unfortunately the onyl thing I found that killed them for certain was our massive heatwave in Melbourne this summer! Alas that is not something you can buy and spray. All the best.

Maybe a garlic "tea" would help?.. Chop some garlic, pour warm water on it and leave for a few days. Then filter it and spray on your plants. Mites are ugly...

That is why I try not to buy plants at supermarkets - better on the internet forums, boards.

Though I try not to use chemicals and make do with soap water spray and panchagavya (a traditional manure/pesticide), I freak out when I see that most of my plants are affected and with just few days' patience, I resort to chemicals. I just can't help it! Ughhh! PESTS!

You make it so fun to read about your pest problems. Haha. I hope you will get rid of those ugly pests soon! :)

oh no that is such a real pain! Good luck with sorting it all out!

Great blog post! I love learning about this online as gardening/landscaping are not only hobbies of mine but I actually do a little bit of work like that during the summer months as a second job. I appreciate your content in your blog and wish that you would keep up the good work :)

I garden inside my apartment, and the only way I can figure that I introduce bugs is through buying plants/soil from outside! Almost everything I have started from seed, but in the past few weeks I brought in some purple tomatoes, lemon geranium, grape vines, begonias, and a few other things.

I had aphids, spider mites, whiteflies, and an increase in the number of fungus gnats flying around my living room.

That is, until the nematodes took care of them! They are mostly gone, but the new pests are taking their place. We'll see if my rampant cutting back/uprooting helps, but I've been able to avoid chemicals, so far!

And next year? I'll grow everything by myself, not buy them from stores!

It helps to use humor when you feel helpless, doesn't it?! But humor alone won't get rid of those pests...if it could, we wouldn't need spray! You do what ya gotta do;-/ I hope you get rid of them and get to enjoy some lovely blooms this summer, Sue!

Yep, I know that feeling. You don't know whether to laugh or cry. It's starts with one leaf then all of sudden it's all over the plant or plants. The only consolation is it's still a little early enough to get replacements so the season's not a complete loss but still that little pain in your heart over the lost ones. LOL.

once The Girl thought we had rabbits in the garden... tee hee hee it was me just tasting stuff...

I am gonna go vote for you as best garden bloggie, will you vote for me for best animal blogger???

I try to get by without using chemicals, but sometime you just have to. I try to keep it at the least toxic possible - sevin dust is my favorite for aphids and squash borers, among other things. It says right on the container that you can use it for flea powder on dogs, so I figure it can't be that bad. In fact we used a sevin-based flea powder on my childhood dog and he lived a LONG healthy life!
Hope your mite situation improves!

I'm sitting here with the same problem, well different pest, but same problem with them. My garden is being attacked by SLUGS! I've done everything I can, but this wet cool weather is working against me! Lovely blog - so much valuable information. I'm a novice gardener, but I'm starting a "Share a Garden Sunday" event that my blog is hosting. I really hope you'll play along - because your advice and gardens are so beautiful. Thanks for such a great blog - you're welcome to visit mine anytime!

oh i'm so sorry about the spider mites! your previous post showed some really lovely containers...:( hopefully you can save some of them.

thank you for your kind words on my blog as well...i will definitely keep your's on my list! :)

Oh how I hate spider mites! Hate, hate, hate them. Yes, you MUST spray.
BTW, I figured out what you were saying about your son, typos and all. :-)