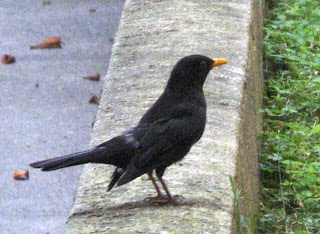 The gardens surrounding the flat have seen a population explosion in the last few months. Of blackbirds. We've always had a pair living here, but this year there must be at least four. And now that their babies are out of the nest, we're almost trampling them underfoot every time we go out. Not your shy, retiring types these. They were on the path first? Well don't expect them to move. You just have to walk round them.
Strange to see so many, because blackbirds are territorial. According to the RSPB website they will cope with as little as 0.2 hectares of territory. But (if my maths is correct) that's 2,000 square meters. Here, they're living on top of each other. They certainly all stick to their own patch, but it can't be more than about 1000-1500 square metres per pair. (Apologies to anyone who read an earlier version of this, where my maths was way out. I'm useless with figures.)
How do I know? Because they sing to me all day long. Blackbird song must be amongst the most beautiful there is, and this year it's kept me company all day every day. By chance I came across this article on the BBC website the other day reporting on how Great tits in the city sing more loudly than their country counterparts - to make themselves heard over the noise, the article said. Well my blackbirds seem to be doing the same - but I wonder if it doesn't also have something to do with the overcrowding. They sit in "their" trees and scream at each other from 4am onwards. 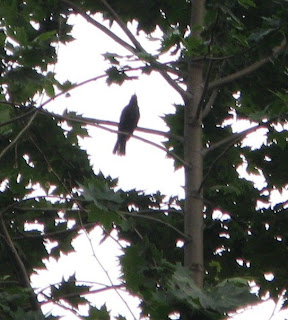 And over the past few months I've started to recognise the differences in their songs. So, come and meet Pippin and Squeaker....
Pippin has his territory in the front garden. I can hear him from the flat, but his main patch is in a tree just outside my office. Now that the weather is warm and summery, I generally leave the French doors open and he sings to me as I work. He's at it now, as I write in fact. He's an incredibly respectable blackbird. Black and glossy and with a song like liquid gold.
And then there's Squeaker. That's him in the photos. Oh dear, quite a different kettle of fish. Dead tatty to look at, and in the song department - well, let's just say he's somewhat challenged.
Not that his song doesn't have it's own beauty. But it is - how should I say it - somewhat repetitive. And after a couple of months of Flirtpety flip flop! Da da DO dee dah sixteen hours a day, I would quite happily pay for him to have singing lessons. Especially as "his" tree is just outside my bedroom window. I've been awake just after dawn every day for the last two months.
Listen and decide for yourself. The video lasts about a minute, starts with Pippin and then goes on to Squeaker. If you're in the UK or somewhere else in Europe, don't be surprised if it doesn't sound quite like the blackbirds you're used to - like people, birds have regional "accents". British blackbirds, French, German and Italian ones etc won't sound quite the same. And if you live outside Europe and have never heard a blackbird - well, enjoy ...
Posted by Sue Swift at 6:35 pm

Labels: Birds and Wildlife, Off the Balcony

For me that's the bird that wakes me up every morning and right now sits outside my window singin. I do have a lot of them in my garden and they are rather fearless. I love the sound of them, when the first Blackbird sings spring has arrived / gittan

Wow! That's a great company, Sue! I love the calls of birds when waking up, like the Parrots (Indian ringnecks) and the Mynahs do here. I see these blackbirds are more sweet! You're lucky :)

Very nice...I actually enjoyed both demos! Could one be more mature? I wonder why they are different.

Both lovely, but I see what you mean about the repetetiveness!

This is a really great blog - shall follow with interest.

I could literally imagine you working with the bird song in the background. In my garden too I get a fair number of birds whose collective singing - though beautiful on most occasions - can be really testing for my ears and my sleep. But overall the voices of these lovely creatures have a meditative quality to them.

Hi Sue, that is brilliant! I just listened 3 times, the birds are declaring their own territory,
"this is my patch" sort of thing.
Yes Black birds can get a bit monotonous, I sometimes whistle back at them, that really does confuse them!