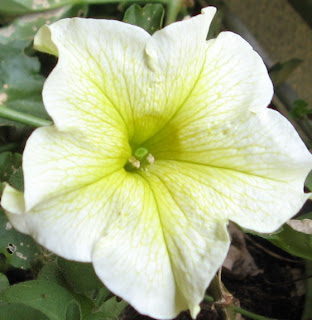 For all of this spring, Gardeners' Bloom Day has come and gone each month and I've not been there. But then I've not been there at all much recently - work commitments and then family problems have meant that blogging has been very low priority for a while. But it's the end of the year - the academic year anyway - and even if I'm not quite on holiday yet, my workload has already halved. So I'm back and will be posting regularly again. Very regularly I hope - although I didn't have time to write, the ideas kept coming and it's going to be fun writing them all up.

But back to the plot, and Gardeners' Bloom Day. Sadly, it's not only been blogging that I've had to neglect recently, but gardening as well. With predictable results. Yes, there's plenty of stuff on the balcony, but I've not had time to look after it properly - things haven't been deadheaded regularly enough, pests and diseases have been allowed to get too much of a foothold before I got to them, and lots of the stuff I'd planned to have in bloom by now is still sitting there in its seed packets. So no long sweeping views of the balcony in a riot of colour this month I'm afraid. Just photos of the individual flowers which are keeping me going. 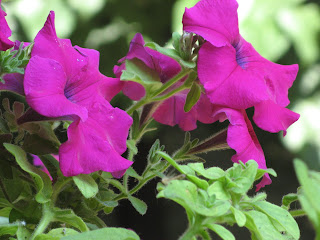 I'll start with the exception though. The surfinias are super, as are their stubbier cousins the petunias, though this pink one was an unintentional purchase. What I actually bought was the purple one you can see behind it. But after a couple of weeks it became apparent that there were actually two plants in the pot - they hadn't been thinned out properly. And the second was this rather gooey pink colour. 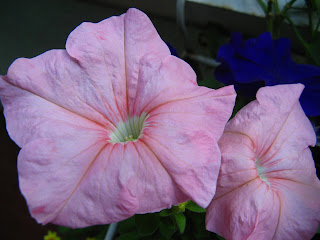 Then there are these little pelargoniums which have been lovely, though they're just past their best now. I finally got round to dead-heading them yesterday, so I'm hoping they'll bloom again ... 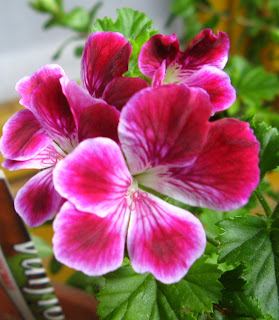 The mallow, on the other hand, is just coming into bloom, having survived last month's leaf miner and red spider mite attacks. Not many flowers yet, but loads of buds. 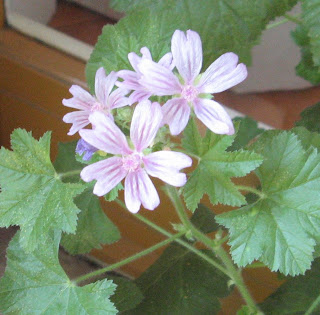 The hollyhocks are nice too, but haven't given me very many flowers this year, and the plants are a bit straggly. They're quite old now - I think at the end of the year I'll get rid of them and start again. 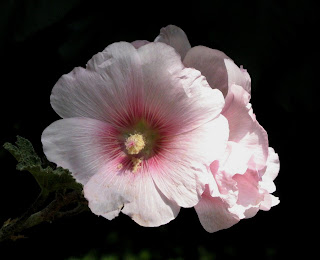 The nasturtiums are blooming quite well, but I'd hoped for more. They've been attacked by goodness knows what and have lost a lot of leaves, so they've become a bit leggy. 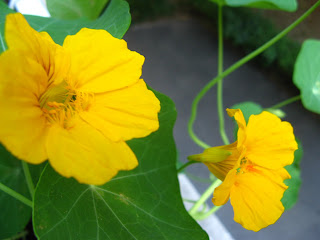 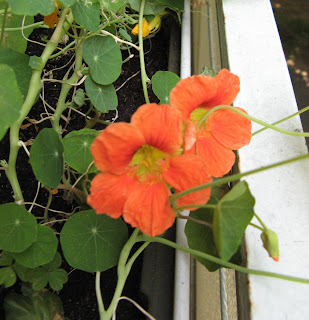 And finally there's this little Begonia pendula, which is new for me this year, Sweet, but not what I'd been expecting. The flowers illustrated on the packet are double and don't have the central yellow part - quite different. And there are a lot more of them - but perhaps that's the gardener's fault ... 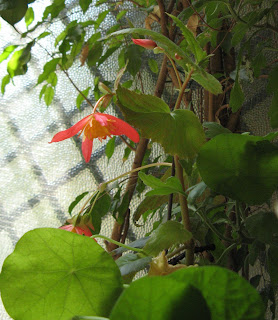 But perhaps I should stop beating myself up quite so much about the lack of flowers, because looking up at other people's balconies, they don't seem much better - and I have one or two neighbours who are usually strong competition. And looking back to the GBD post for two years ago, I noticed that in 2007 my plumbago was already in flower. So far this year I haven't seen so much as a bud. And it's not just mine - no-one else's is in bloom either. So maybe it's just a slow year. The weather has been strange (but then when isn't it?). Cold, wet weeks alternating with temperatures of over 30°C (that's mid to high eighties in fahrenheit).

But to finish - a note about Gardeners' Bloom Day. Just in case there's anyone left on the planet who hasn't heard of it, it's an idea started a couple of years back by Carol of May Dreams Gardens. Carol had the brilliant idea of suggesting that on the 15th of each month everyone should post about the flowers which were currently blooming in their gardens. It's been incredibly successful, with scores of people taking part each month. I've not missed many - this is my 22nd GBD post. You can find out who's posted this month by checking Carol's blog and the comments left on her own post.

It always amazes me just how much you have growing on your balcony. Is it a large balcony?

Nice to see you back Sue. Each year brings new blooms and leaves others behind. It is Nature's little surprises. I like the pale yellow petunia at the top of the post.

Welcome back, Sue - I've missed your posts! I've also got some of the limegreen surfinias, growing well in my back garden. And here I am on the right date ( first time) for Bloom Day. Must post something now from my back garden - thanks for the tip...

For a neglected balcony, you really do have a lot in bloom. I got a freebie surfina that still needs to be stuffed into a container. I generally don't like Petunias because of the foliage odor, but this might win me over. I love the blooms of your Pelargonium, I hope it rallies & reblooms for you.

Just found your balcony garden ... thanks to GBBD. I think your petunias are lovely and hope you enjoy getting your hands back into the dirt... look forward to seeing more of what you grow on your balcony. Someday I may join you in gardening on a balcony!

I have a soft spot in my heart for petunias, bubble-gum pink and all-they are what my mother always planted in our little flower bed in the front of our house when I was growing up and the first things I planted when I took over the planting of that bed when I was a teenager. Glad you were able to make it back for this GBBD. It's always sad when life gets in the way of things you enjoy. Here's to many more posts from your lovely balcony!