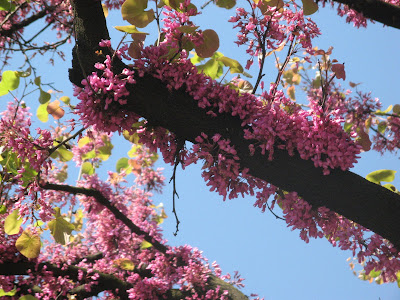 Almost a year ago now Skywatch Friday took off. Just in case you've never come across it, it's an invitation to bloggers to post their photos of the sky once a week - and some of them have been stupendous. Roiling clouds , red and gold sunsets, eagles soaring against blue skies. Oh how I would have loved to join in. But as I explained to someone in a comment once (I don't think she believed me, but it's true), in Milan we don't have skies. First of all because you can barely see more than a square inch of it between the buildings, but then because of the weather conditions. The sky here tends to be uniform blue or uniform grey. Period. One of the things I still really miss about England is the way it can be raining one minute and bright sunshine twenty minutes later. That doesn't happen here. Whatever it's like - sunny, raining, foggy or anything else - it's like that for at least three days. The changeover from one type of weather is slow and gradual over a day or so, meaning there's nothing dramatic to photograph. Certainly nothing like the skies in some of the other participants' photos - like for instance this one from New Zealand .
But browsing through the photos each week, I saw that lots of people were posting photos of things against a plain sky background, so why not me too? 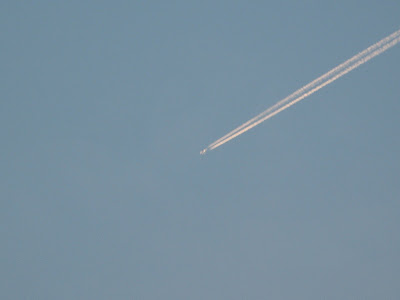 And that's what you've got today. The first is a tree that was in bloom around Milan about a month ago (can anyone identify it?), the second was last night. Planes in the sky always fascinate me. Where have they come from? Where are they going? There are real people on board - I'll never know who they are, they'll never know I'm watching them. Who is the pilot? What nationality is s/he? Is s/he married? With kids? They're all there now - passengers, crew - working, reading, eating, drinking and experiencing. And me. We all experience the plane from totally different viewpoints and know nothing of each other, can have no idea of the experience of the others. It fascinates me.
But I'm digressing ... Initially then, my Skywatch contribution was going to be a one-off post - a couple of photos collected over a period of time and then forget about it. But this month the weather has been strange. We've had wind (rare in Milan) which has brought scudding clouds. And we've had showers which lasted for no more than half an hour and then cleared up. And consequently the sky has been changing at a rate of knots. So I've been building up a collection of photos, and for the next couple of weeks I'll be joining in - and I'll try to do it on Friday, I promise.

I don't do Skywatch Friday either, Sue, but only because there are just too many memes to do now and they've sort of lost their novelty for me (too many obligations takes the fun out of blogging, doesn't it?) I can't help with the UFO, but it's sure pretty!

Hi Sue! I also think about people on the planes that are in the sky...