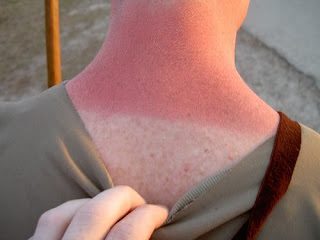 Now, I have to admit that the Daily Telegraph is not what I normally read over my morning coffee. And not just because I'm in Italy. And if you'd told me that I'd find myself reading an article from their on-line version and going Yes, yes you're right, so right I'd probably have asked you if you'd perhaps had a bit too much sun.

But the other day I came across an article in their gardening column - and that's exactly what I found myself saying. And ironically, it was an article about exactly that - getting a little bit too much sun.

If you garden, you're at risk from skin cancer. And as Matthew Appleby pointed out in his column, it's something that most gardeners don't take seriously. The lack of an immediate cause/effect link - the damage is done slowly over a long period - means that we tend not to think about it. Not that is, until it's too late. The sun doesn't seem strong enough to bother with suncream. And anyway we're only going out for half an hour. And we can't be bothered with a hat - it keeps falling off.

There are various types of skin cancer. Some are rarer than others, and some are more dangerous than others. But most - certainly the three most common types - are generally triggered by long term exposure to the sun. (Other triggers include contact with certain chemicals, a weakened immune system, and other factors.) And they are on the increase.

Your skin type may mean you are more or less at risk - basically the fairer your skin the more damage the sun can do. When you get sunburnt, the UV rays mutate the DNA in your skin cells. And it is this mutated DNA which years later may start to cause cells to grow out of control - forming the tumour. Click here for an animated explanation which you might want to show to your kids too.

But you can get skin cancer however dark skinned you are - and there is one type which is actually more common amongst people with darker skins. Which means that everyone needs to take precautions. Both to protect the skin and, if the damage has already been done, to ensure early detection in case anything does develop. Most types of skin cancer are easily curable if diagnosed early enough. But leave it too late and - well, cancer is cancer.

Most of the precautions are by now well-known : But I'd add a couple more :

And at this point I have to confess to why Appleby's article caught my eye in the first place. A few years ago I was diagnosed with a melanoma - a more dangerous type of tumour than the two most common forms of skin cancer. Not only am I fair-skinned and freckled, but I come from a generation which knew nothing about the effect of sunburn . Until I was well into my thirties I didn't see getting burnt as being anything but a joke - if a somewhat painful one.

Then, when people started seeing the effect the hole in the ozone layer was having on skin cancer rates in Australia and New Zealand, the news slowly started to filter through. But by that time the damage, for me, was done.

I was lucky. By the time the tumour was diagnosed, I'd realised I had some rather dodgy looking moles and had been having annual check-ups for about ten years. Which meant that it was still at a fairly early stage when they found it, and very easy to deal with. A couple of small operations to remove it were all that were needed.

My check-ups are now six-monthly. If you've had a melanoma once your chances of having a second one increase. So needless to say, you never see me outside in the summer unless covered from head to toe with both clothing and sunblock. And so far, so good ...

But to finish with something a bit less gloomy ... There's a saying in Italian : Non tutto il male viene per nuocere. Which roughly translates as Not all that is bad comes to harm us or, if you like, Every cloud has a silver lining. Although easily operable, the mole they took out was in a very awkward place, right on my calf muscle. And the surgeon was worried that if I started walking around too soon, I'd rip all the internal stitches - he'd taken a fairly good chunk of my leg away. So he said - three weeks in bed. Well it seemed like paradise at first - three weeks in bed, without feeling ill, being waited on head and foot, and with nothing to do but read. But after about a week it started to get boring. At which point my son plonked the portable computer on the bed and said : Why don't you start a blog?

My initial reaction was Who me? What have I got to write about? But then I looked up from the bed and out onto the balcony. Hmmm, I wonder .. Might give it a try.

And here we are.

But I'm sure I'm not the only one with a Why I started blogging story. What about you? Leave a comment telling us or, if it's a long story, turn it into a post and leave us a comment with a link.

Oh, and if you nip out to stake the beans while you're in the middle of it - don't forget the sunblock.

And for more information on skin cancer

Very interesting and thought provoking. I am not great at remembering the suncream especially as I have been working outside for years!

A timely post Sue, just as summer seems to be returning here in the UK over the next few days.

Great story Sue. I am glad yours is a good outcome. As I first saw the post, I thought that looks like my neck! I am trying to put sunscreen on more often, even put on a hat this weekend when I was working outside.

Another fabulous post as usual. You are so right, we don't tend to think about it much when gardening, but being married to a ginger bloke I am always thinking about it now and wear spf 25 on my face everyday, inside too!
I am sorry you had to go through an operation yourself, scarey, but one that you and many of your friends have learnt from, the hard way. I love the Italian phrase, it's so true. P.S. your photo at the top makes me feel slightly queasy.

A thought-provoking post, although I do put F30 on my face very day, more or less without fail and wear a hat if it's hot. However I'm not so good with the rest of me, and in the spring of this year I developed a 3 inch band of pink skin on my lower back... yes, you've guessed it, where my top parted company with my trousers when bending over!

The red head in the family had some small hints. She now is more careful. A shade pontoo boat. And she was only a occasional gardner.

I'd like to point out that one must protect the eyes with hat or glasses as well. They say sun causes cataracts.

Thanks for the reminder.
sunnyside -- jo

I live in Atlanta, GA, USA and the summers here are brutal. I try to do my gardening early in the morning or later in the evening. I also put 30SPF on my face every morning, but I'm not good about reapplying or covering the rest of my skin. I will definitely try to do that more often now. Thanks.

thanks for the reference Sue.
good to spread the word on this in northern hemisphere.
www.hortweek.com

Hi , my mum has had breast cancer , my dad has liver cancer , you are so right , it does happen . dads beating it and mums fine now but still , its terryfying but im rambling . Im here to say why i started my blog . I built a balcony . myself , and im proud . i have plants on it and i read so many wonderful blogs i wanted to give something back to all the people that gave something to me . im an artist with severe depression , other people and their balcony gardens , especially swiss ones kept me going , so here i am , just a beginner :-) http://englishandnotenoughswisslife.blogspot.com/2009/12/about-me.html for all the people that shared their lives and gave me that happy feeling , thankyou :-)