Bright Spots in the Garden 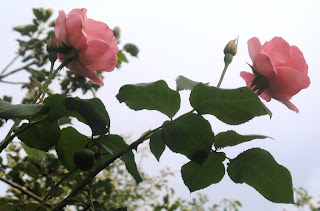 I've been back in England for a week, thinking that we might finally get the finishing touches put to the house and get it ready for letting again. But it seems that every time we do one thing, another ten problems arise - and rather than finish off decorating the bathroom this week, we've had to strip it down to the bricks and start again. So I'm going to be coming back and forth for most of the autumn .. 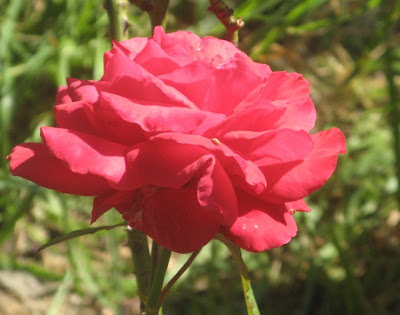 But if the house is still a disaster, the good weather this week has given me time to get on with the garden, and it is very gradually coming into shape. But despite the jungle that I found in July, it wasn't all doom and gloom, even at the start. There were a number of plants which hadn't completely succumbed to neglect and were bravely flowering on, against the odds. Like the roses which, despite being covered in black spot, continued to put out the odd flower. 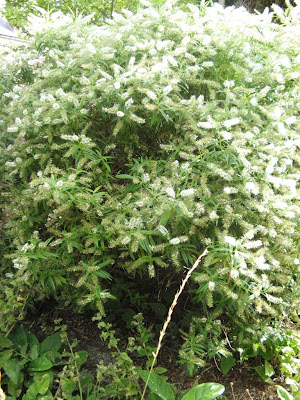 Then there was the hebe bush. It was already past its best when I got back in mid-July, but you could still see how glorious it had been. The bush self-seeded several years ago, in another part of the garden where I didn't want it. I transferred it when it was a tiny little twig, not sure if it would take. It's now five foot high and four foot wide, and was covered in blooms, much to the delight of the local butterflies. 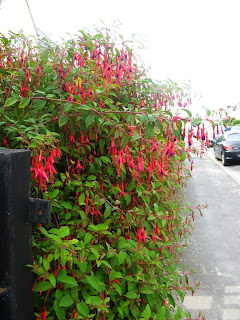 Another bush of about the same size was the fuchsia by the front gate. It's been there for as long as I remember - at least thirty years, possibly longer. It's not my favourite fuchsia variety, but what it lacks in the quality of the blooms, it certainly makes up for in quantity. 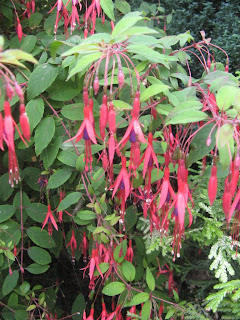 A number of plants had self-seeded in awkward places, but were doing the best they could. These sweet peas had grabbed hold of the conifer to support them ... 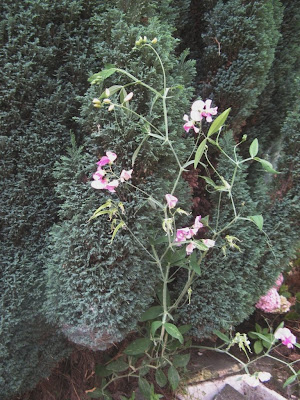 while the cracks in the paths had provided a home for the alyssum. 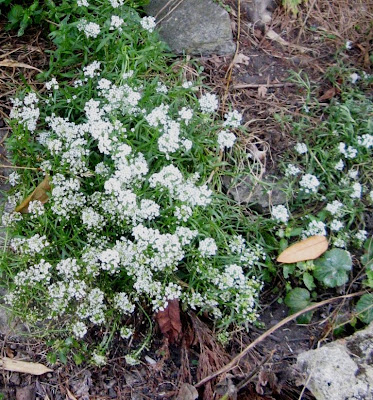 Add to that the hydrangeas which I've already posted about, and there was at least a bit of relief from the weeds. More colour was provided by the berries, which are now glorious - but I'm going to save that for another post. 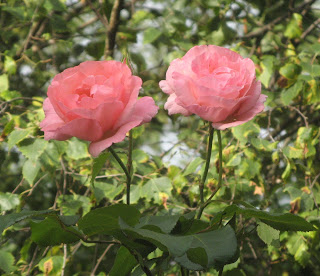 It isn't raining, that is me drooling over the hebe and fuchsia! And, what pretty roses. Lovely.

Beautiful blooms, especially that fuchsia. (Isn't that a hateful word to spell correctly?)

Wow, Sue, you have pretty garden there! I love that fushcia! I try to grow a couple of F.magelanica, but they are not big enough yet. I love your travel route: Italy - England-Italy. I'd take it!

I love flowers like the fuschia - there are so many interesting things going on...

I love your fuschias growing! And look how healthy and vibrant the pink roses are doing!

I totally imagine the finishing bit for a house. It's an unending process...all the best, Sue.
Your garden looks lovely.

thank goodness for strong willed plants, they renew hope in the idea that we too can push on in the wilderness. enjoy and good luck with the house.

That's the hardy fuchsia isn't it, I rather like it... not nearly as showy as some but beautiful colours! Good luck with the house, and at least when it's done you'll be able to get top rent for it!

This is the good blog with good pics and good details. Please keep on posting the more stuff. I will like to hear more from you.