Summer doesn't want to die this year. I came over to England with a case full of warm clothes, but I've not needed them. It's been warm and sunny. Not too hot - but warm enough to be out in a t-shirt. Perfect gardening weather

But we've reached the autumn equinox and from now on we're heading for winter, whatever the current temperatures are telling us. This is the time of the "transumanza" - when, in Italy, the flocks of sheep and cattle would traditionally be brought back from their summer pastures in the mountains to lower and milder climes. We may be lucky and ease in gently - tradition has it that the weather between the 21st and 23rd of September sets the pattern for the rest of the autumn - but it's time to get ready. 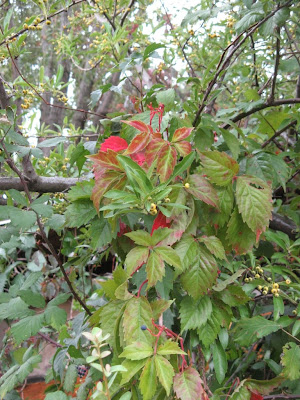 Even while we were at the sea earlier in the month, the clues were there. It still seemed like summer weather, but even when we arrived, the Virginia Creeper was telling a different story. And by the time we left, just over a week later, there was no way of pretending not to notice. 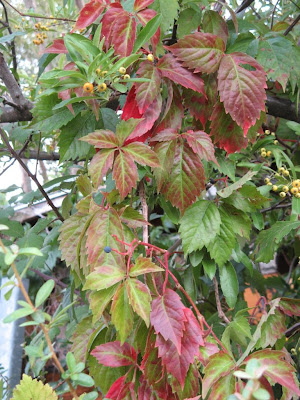 The squirrels in my garden know. They don't play any longer - all day they're back and forth, burying nuts. The warm weather hasn't fooled them. Hard times are coming.

The plants know too. Their blooms have given way to seed pods and berries.

And the trees know. It's already time to get the rake out.

Winter's on the way.

Hi Sue! Very nice post. I try to fool myself and pretend that it is still summer. My garden is green and flowers are bright, but when I go to the places with decidious trees, the situation is clear -autumn is here! This summer was very good!

A very nice transition into autumn.

What a beautiful creeper, Sue!

It is indeed very interesting for me to witness here with you how the changes in seasons affects plants and animals. This is a well written post.

Oh dear, is it really that time of year already?
Can I admit that squirrels make me squirrely!
It can be very hot here at this time of year, but daylight is decreasing and leaves are falling.
To be honest, the change of season always feels welcome. Cheers, Alice

Virgina Creeper is so beautiful in the fall -- it must be a very tough plant because it's everywhere here in Nova Scotia, as well. I used to live by a tennis court which was surrounded by a wire fence. 3/4 of the fence had this vine attached to it and in the fall, it was a sight to behold. :)

How wonderful! I'm pretty sure I have virginia creeper out in back, but I didn't know it would get so colorful.

During the day, it feels like summer, but in the mornings and evenings, the crisp, cool breeze tells me it's autumn. The colors springing up in the mountains are fabulous reminders, too!