We just got away in time, before the snow created havoc. Two days after we left, Milan is at a standstill with trains not running, and airports closed. Schools closed too, much to my son´s disgust as he´s not there to profit from it. Here in north Germany on the contrary, the worse seems to be over. Temperatures are again above zero (in comparison to -14C the night we arrived) and a night of rain has washed away most of the snow. So will it be a white Christmas? There´s still time yet, but at the moment it´s looking much less likely than on Sunday.

Since The Balcony Garden started, we´ve always had a Christmas Quiz focusing on the plants associated with Christmas time. You can see them all if you click on the link. The 2006 quiz was easy - plenty of questions to ask. 2007 went well too. But by 2008 I was having to get really sneaky, and this year - well, if you get five out of five this time (without cheating and looking them up on the internet), the you really know your Christmas traditions. So here goes - the 2009 Balcony Garden Christmas Quiz. 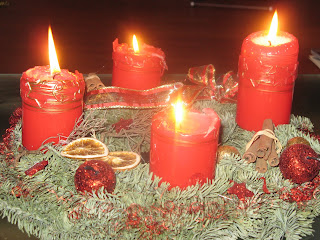 1. The photo above shows a German Christmas tradition - an evergreen wreath with four candles. But when are the candles traditionally lit, and why?

2. There is a legend that during the Holy Family´s flight to Egypt, Mary laid some freshly washed clothes of the Christ Child over a bush to dry, so that the fragrance of the bush would permeate the clothes. In recognition of the honour bush changed the colour of its flowers from white to blue. What type of bush was it?

3. Every year on December 23rd a festival is held in the Town Square in Oaxacaca, Mexico as part of the Christmas celebrations. The festival consists of a competition for the best carving made from a particular vegetable. Which vegetable is it?

4. In Lithuania there is a traditional Christmas Eve meal in which no meat or hot food is eaten. One of the traditional foods consists of small pastries soaked in a "milk" made from a certain type of seeds. The seeds are soaked in water for a day, then crushed until a white liquid is obtained. This is then diluted with water and sweetened with honey or sugar. But what type of seeds are used? 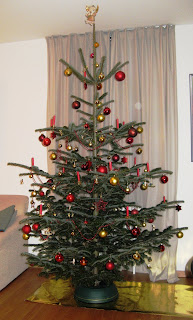 5. Which of the following banned the Christmas tree?
a) The Bolsheviks after the 1917 October Revolution.
b) President Roosevelt, who didn´t want one in the White House because he objected to trees being cut down to be used as decorations.
c) The United Nations, from the Copenhagen summit last week, in order to avoid the use of a symbol of a religious festival.
So how did you do? Here are the answers :
1. It´s an Advent Wreath, and one candle is lit on each of the four Sundays before Christmas, until on the final Sunday all four candles are burning.
2. A rosemary bush. Another version of the legend says that it was Mary´s cloak which was laid on the bush, which better explains the change to blue flowers.
3. A giant radish. You can read more about it here.
4. Poppy seeds.
5. All of them.
Ah well, after that Christmas can only get easier... Here´s hoping you have a wonderful time and have only just enough snow to make it a white Christmas without causing any problems.
Happy Christmas !

It's a bit different from banning Christmas trees altogether, but I decided to go with an artifical tree a few years ago because I don't want my houseplants getting spider mites or scale from a live tree. Plus I love being able to move the branches to where I want them ;-) Roosevelt could have had a potted tree, I guess.

Great quiz Sue, I enjoyed reading it. Some I knew, some I thought I knew and some.....well thanks for sharing this!
Merry Christmas to you

I got the first two right, and part of the last one. Does that prove I'm lost in Christmas past, or what?

As a family unit (me, andrew and maggie) got 3 right!!! Very good quiz, off to see these radishes. Merry Christmas x

I only got one right! But I've learned a lot from the answers. Happy Christmas to you and yours!

Happy holidays and thanks for all the great blog posts in 2009!