Has a year really passed since I was sitting here doing the review of 2008? It seems about five minutes ago. But in three days it´s going to be 2010, so here´s a look back at what has happened this year... 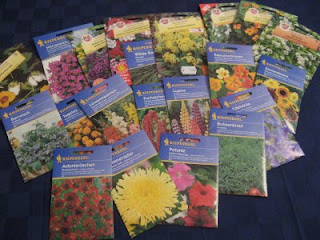 On January 1st we were in Germany and it was snowing. But that didn´t stop me getting myself to the local garden centre and stocking up on

seeds for the year. Sadly it wasn´t to be a particularly good year on the balcony - too much work and having to be away a lot meant that I had much less time to spend on gardening, and the casualty rate was high. So if you don´t remember having seen photos of many of the plants in the seed packets, well that´s why. 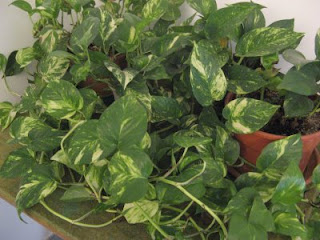 Back in Milan and the bad weather continued, meaning that most of my gardening happened indoors. At the end of the month I posted on looking after

Scindapsus - a plant which people often scorn, but which personally I love having around. 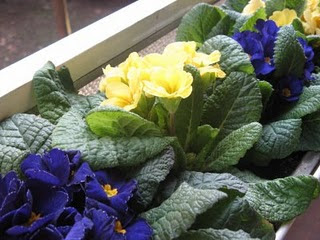 By February the weather was getting better, and it was time to start preparing for the year. A balcony may not be quite so time-consuming as a garden, but there´s still plenty to do clearing up after the winter and preparing for spring. See here for a checklist. February was also the month when I posted about how my cooking tended to revolve around the herb savory - and how I was planning to grow it on the balcony in 2009. Sadly it was one of the failures, but I´ll be trying again this year. 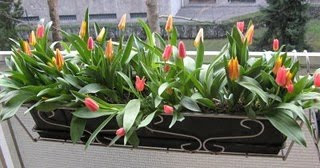 March arrived, and suddenly things were blooming again. Much to my surprise, the

tulip bulbs which I´d planted for the second year running were the greatest success of the season. So much for all the books which said that tulip bulbs planted in containers should be thrown away after flowering. They´ve gone in again this year - we shall see. 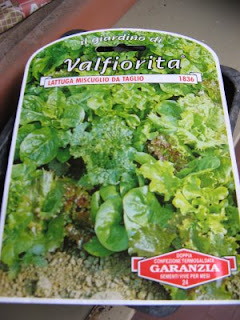 In April, I was also planting salad and veg. But we´ll draw a veil over that one. If my flower gardening wasn´t greatly successful this year, the kitchen garden was a disaster. It produced exactly two French beans ... But then, when your packet of lettuce seeds assures you you´ll be harvesting tomatoes, I suppose failure is to be expected. Confused? So was I - click here. 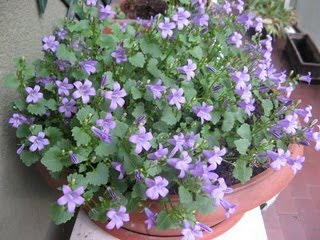 May. If the balcony isn´t looking good in May, then it never will be. My pride and joy this year was my little campanula, which bloomed its heart out for me all month. 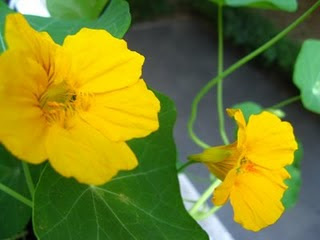 June was pretty good too, with nasturtiums, petunias and surfinia, pelargoniums, hollyhocks and begonias all in full bloom. And for the first time ever, I managed to persuade the great tits and blue tits which live in the garden surrounding the flat to come on to the balcony to feed. 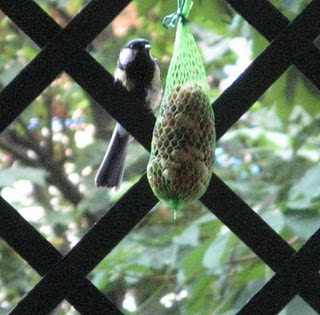 In July we were off to England - where I found my garden completely overgrown. The photo below shows what used to be the rose bed. Two months hard work followed, to get it back to some semblance of order. I planted a lot of bulbs and other stuff while I was there - and hope to get back soon to see how they are doing. 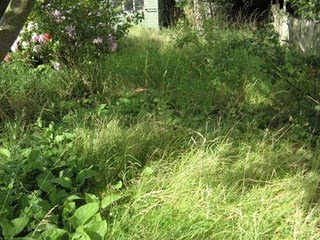 However, the overgrown state of the garden meant that it had become a haven for wildlife - including a family of foxes, who soon realised that dinner was on offer nightly. Not too much - we wouldn´t be there to provide for them forever and the young ones had to learn to forage for themselves. But enough to encourage them to come and check us out every evening. 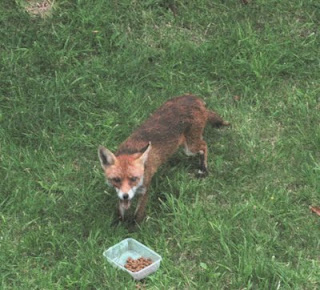 In September my son and I went to the sea for ten days - to Eraclea Mare, not far from Venice. It was undoubtedly the best two weeks of the year. 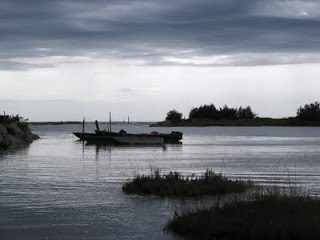 On one of our many walks and bike rides into the lagoon, I spotted a buzzard circling high above us. 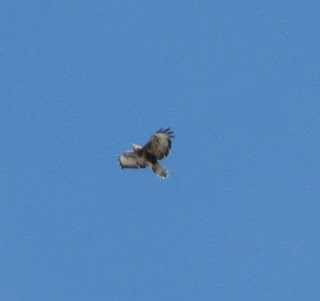 September also brought the honour of being voted "Best Container Gardening Blog" on Blotanical - something I truly didn´t expect as the competition was so strong.

In October I found a mystery plant had self seeded itself in one of the containers. But several people who read the post were able to identify it as Kalanchoe daigremontiana - or Mother of Thousands. Sadly it succumbed to the sudden drop in temperature we had in December. It was looking very sorry for itself when I left for Christmas holidays, and I very much doubt if it will have made it. 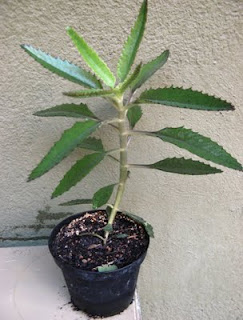 But on a cheerier note, October was also the month when the Hummingbird Hawkmoth visited the balcony. 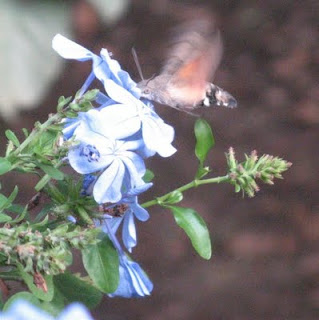 In November the chrysanthemums were in bloom .... 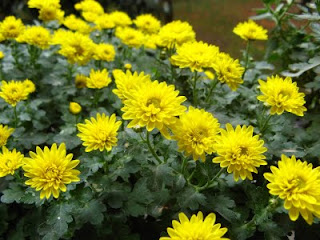 ... and it was also the month when Bilbo the garden gnome visited the Balcony Garden. for those of you who don´t know him, he´s doing a world tour, and visiting people´s blogs along the way. When he left me, he went off to Sweden to visit Gittan and play in the snow.. 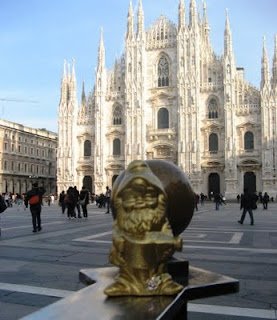 In December the weather turned chilly and it was time to cover up the balcony before the first sprinkling of snow fell. Everything was covered with fleece and moved back against the warmth of the walls of the flat. But temperatures were about to fall to a record -14C (that´s 7F). That happened the day we left for Germany again, so I´ve not yet seen what damage it´s done. Will anything have survived? 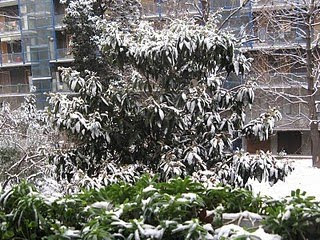 So, the year has come full circle, and in a couple of days will start again. It was a busy, and at times hectic year, but without real ups and downs. I had little time for the balcony (and some months even less for blogging) and it showed in the results. So my goal for next year is to find the time again, and to have the balcony looking as good as it has in some past years. And of course, to get a few more than two French beans ....

To everyone who´s followed the Balcony Garden over the past year, I hope you have a very, very

I'm so glad you picked my latest post on Blotanical because it drew me over here and I seem to have arrived at the right moment because I can catch up on so much at once.

I suppose being away because of work is in some ways good?

Savoury - I'm glad you mentioned savoury. I've never got anywhere with it but that doesn't mean I shouldn't have another try.

Nasturtiums - I'm jealous. Until this year I hadn't realised nasturtiums could fail but this year, for me, fail they did.

Best wishes for the rest of the Christmas season, for New year and for 2010.

Heheh I had forgotton about the lettuce-mato! Your garden does so well even without a constant presence (mine gets sulky if I leave it for even a day!!!) Hope next year is an even better year and fingers crossed for the tulips.

My garden has suffered this year because I wasn't able to work in it very much. I just had too many other irons in the fire, so to speak.

Happy New Year, Sue. You had an interesting year - thank you for letting us look over your shoulder. Just yesterday I was telling a son-in-law about your post telling us about the hollyhocks that were secretly planted along the commuter train tracks.

I really enjoyed your "Year on the Balcony". You grew some amazing plants. I love container planting and although I have more land than I can plant, it's always the pots around the patio that get the most fussing over. I look forward to reading your blog all through 2010.
Cindee

Hi Sue! It was interesting to follow you month by month. Happy and Healthy New Year to you!

Hi Sue,
thanks for your message on Blotanical - it's nice to meet you too!

I've really enjoyed reading your blog and it looks like you thoroughly deserved your Blotanical award :)

Sue, i wish you a Grand and Glittering New Year and i look forward to read many more of your words!

It has been a great joy to follow your gardening adventures. Can't wait to see what 2010 brings!

I am so glad I visited today to read this wonderful review of your year! I hope 2010 brings you all you wish for!

Hi Sue - I enjoyed your year and review. It is amazing how much you can grow in containers. A blooming balcony is a lovely thing -Gloria in South Dakota

I love your tulip bulbs. They are so beautiful. We live in Florida and it is too hot here to grow them. Best of luck in your garden this year.