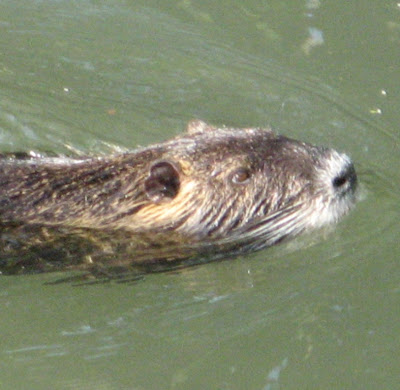 Now that the summer is showing signs of waning and the city is cooling down, I've been venturing out again occasionally for a walk. We were walking along the Martesana canal (1) last week, and talking about the ducks and moorhens, which seem to be more plentiful than usual this year, when someone said to us : Excuse me but do you know what that animal over there is? 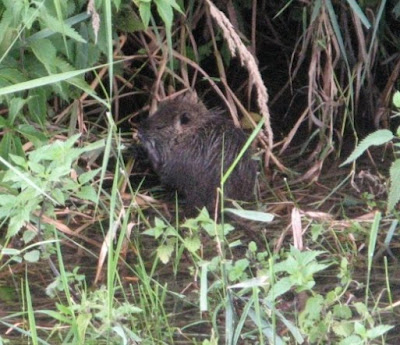 Animal? On the Martesana? Apart from the occasional infestation of rats which the Council soon steps in to deal with, I've never seen any sign of wildlife on the canal. But yes, there they were - two little Coypu (2) happily going about their business on the far bank.

The coypu (Myocastor coypus)is widespread in Europe. A relative of the beaver, they're originally native to S. America, but are bred for their fur (and sometimes their meat, which is very low in cholesterol). Animals which have escaped from the fur farms have gradually colonised the continent. They are usually considered a pest - here in the north of Italy for the damage they do to the rice crops (Lombardy is the most important rice producing area in Europe) - but elsewhere for a range of reasons ranging from the destruction of other crops such as sugar beet, to the damage their burrow do to river banks, to the threat they pose to other species because of their impact on the environment (3).

But I'd never seen them, or even heard of them, in Milan. And I'd never noticed them on the Martesana before. True, I'd not been there very much for a couple of years - the canal path was closed while they built a new railway bridge for the high speed lines and, as always what was meant to take a matter of months went on .. and on... and on.

A quick bit of research on the net solved the mystery. It's all the fault of the recession.

When the recession hit, people stopped buying fur coats (at least one positive result, then). And rather than pay to have the animals put down, the fur farms often just released them. A few found their way to the Martesana and the population has been steadily increasing ever since.

And wow, has it been increasing. From nothing two years ago, the canal is now overrun by them. We didn't notice that day, but as I didn't have my camera with me (you never do when you want it, do you?) we went back the next day to try and get some pictures. Not that I had much hope - I was convinced that they'd have disappeared. 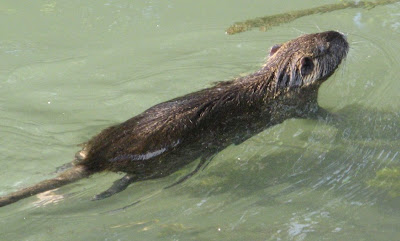 No way - as we walked down the canal, I estimate that we saw a pair every three or four hundred yards - and we walked for about two hours. I was amazed at just how quickly they'd established themselves.

So there you go - my London garden has its urban foxes, and here in Milan I've got coypu in the back yard. Almost like living in the country. 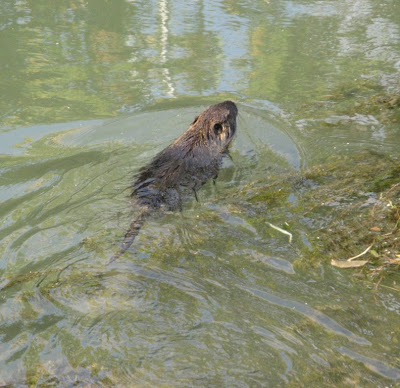 Labels: Birds and Wildlife, Off the Balcony, The Martesana Canal

I'd heard of coypu but had no idea about them, so thanks for adding to my knowledge!

They're quite a surprise when you first see them, aren't they? We have a few who live around the bridge in our village. They've been there for years and they compete with the ducks, quite happily, for food. I've never managed to get as good pictures as yours, though.

From foxes to coypu. You have really got the best locations for animal sightings. Admittedly, I don't know how I would react if one of these crossed my path. They look like olympian-sized swimming rats!

Sue, How cute! I just returned from England, but didn't see any interesting creature in Mom's backyard ... just the neighbor's cat. Here in PA we have deer and a black bear! I'm scared of the latter and would rather have a coypu! Pam