A Matter of Space

Earlier in the year I blogged about how much difference it had made to my wallflower seedlings whether I'd kept them growing in small pots or had planted them straight into their final containers. You can see what happened here, but basically the seedlings in small pots, with restricted space for their roots grew much better.
But there's an irony here - because potting seedlings in this way may mean less space for them - but having a multitude of individual pots lined up takes up far more space on the balcony. And when you're balcony gardening, space is at a premium.
So when my next batch of seedlings was ready to be pricked out, I hit on an alternative. 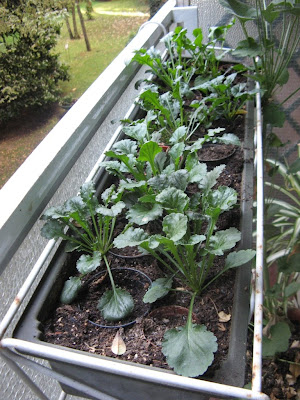 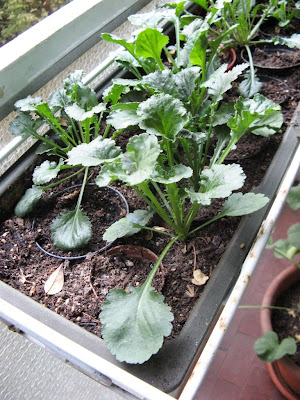 Soon I'll be moving them to their final containers. But even here there's an advantage. The seedlings in the spaces won't have to be moved at all. I shall simply take out the pots and leave them where they are. So no disturbance to the roots at all. And where the pots have been taken away, I'll have neat "pot-sized" holes, where I can pop in other plants to add variety - again meaning minimum root disturbance.
It's been an experiment that really paid off, and one that I'll certainly be repeating in future.
Posted by Sue Swift at 4:20 pm

Well, aren't you the clever one!

I love this! I always wanted window boxes for flowers - but this is a great idea! Thanks for sharing.

Looks like you've come up with a wonderfully practical idea here.

This is a great idea that I'll keep in mind for next year. The question is...now what new thing will I grow?

Hey Sue I enjoyed that what about those hanging on the wall pouch things? They look brilliant for space saving