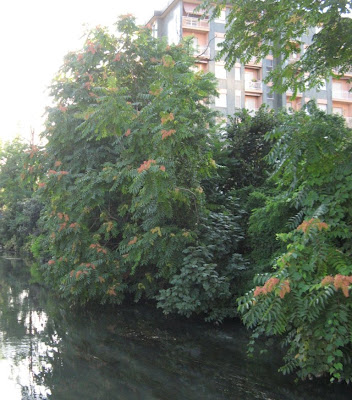 I love this tree, particularly at this time of year when the red seed pods glow against the green of the leaves. This one is growing on the canal close to home. But wherever you are in this area you don't have to look far to find it. Usually though it looks like this... 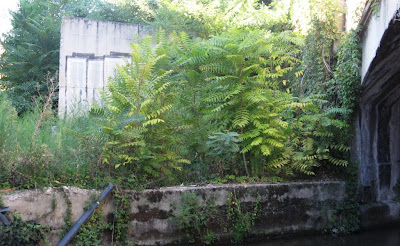 It is one of the most invasive plants I know of. It seeds itself everywhere - including in the containers on the balcony. I pull out two or three every year. And as soon as a piece of ground is left undisturbed for aseason, up pop swathes of the young trees. Our local railway line is lines with them on both sides of the track, not a centimetre of space between them.
What are they? Ailanthus altissima, also known as Swingle or the Tree of Heaven - a reference to its height, which can reach 25m. But for anyone trying to keep it from taking over their land, a more appropriate name would probably be the Tree of Hell.

Other plants must think so too. They don't have a chance - it not only reproduces so rapidly because of the huge numbers of seeds produced, but also because it produces a chemical which inhibits the growth of other plants (1). Some trees just don't play fair. 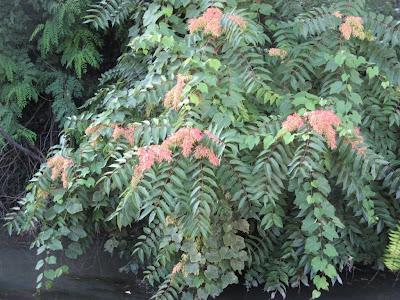 If you've been looking at the photos and thinking But isn't that some sort of sumac? No, it isn't. Whilst the leaves look very similar, they are actually two different species. Not sure what you've got? Well, they say that if you break of a leaf of ailanthus, it smells bad. I tried it this morning ... 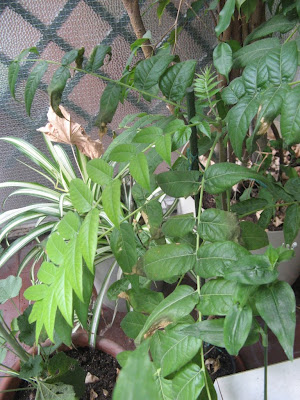 The leaf I picked came from this one. Last year as I was hoicking the self-sown seedlings out, I took pity on him and potted him up. He's been attacked by something in the past couple of weeks (a fungus??) and I've had to pull various of the leaves off, so while I was at it I had a quick sniff.

I couldn't smell anything, but then it's common knowledge that when the sense of smell was being given out, I was standing way out of line...

Introduced into Italy in 1760, as an ornamental plant, Ailanthus has now largely taken over in many areas. A report produced by the Italian Ministry of the Environment together with various other institutions (2) gives a detailed description of ten of the most invasive plants in the country. Of those ten, Ailanthus altissima is the only one shown as present in every single region in Italy.

And it's not just in Italy. It's become a pest throughout much of Europe. When I was in London this summer I noticed them growing in the park at the back of the house - somewhere I'd never noticed them before. They weren't very tall, but they were maturing fast. Once they start to seed, there'll be no stopping them.

And they're right behind the garden.

It does look pretty but if it inhibits the growth of other plants, I dont think I want it in my garden. Still, Icant help feeling drawn to its looks.

It starts off all innocent. I planted this tree in our landscape but on a limited track where it is cut off from other plants. The first year, it behaved well. This year it actually produced many tiny little offsprings around the plant. So I am not disappointed at how aggressive this plant is...as long as it stays in that area:) We are in the desert Southwest of Tucson Arizona and hardy GREEN plants are welcome:)for now.....thank you for the info on this plant.

Very interesting but a bit scary to / gittan

I've been thinking about you and your trip to Lund these last days, do you know when you're comming over?

I've probably seen this tree but never really noticed it for what it was. Will have to investigate further in order to be able to identify it....if it should ever take root in our garden!

hi good day nice post you have . great . i hope you have a post about wind spinners
im interested on this i hope you can help me . thank you!

It is extremely invasive in the eastern U.S. It is on the Federal invasive plant list and on those of several states. Good post about it.