Look what they've done to my balcony...

As usual we spent the Christmas and New Year period in Germany. We left Italy just as a lot of European airports were being shut for snow, and thinking that it might turn south, I made sure to fill up the bird feeders before we left. 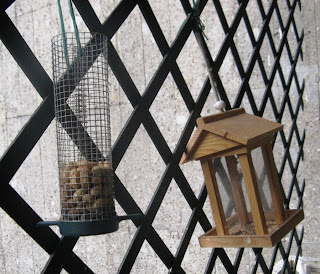 In fact, while most of the continent had a very white Christmas, Milan only had rain. That didn't deter the birds though. The great tits are clearly at the more respectable end of the bird community. They've been pecking their way gentilely through the peanuts,and I'm expecting a thank-you card to arrive soon. The sparrows, on the other hand, are a bunch of deliquents who clearly saw the bird-seed container as an invitation to vandalise the whole place. 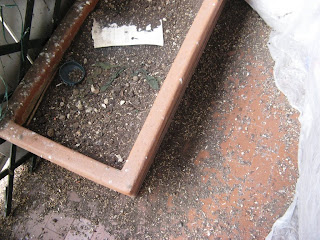 The balcony looks as though a bomb has hit it, and I hate to think what I'm going to find growing in that container next year. On the plus side, I don't think I'm going to have to buy any fertiliser. By the time I've scraped up all the droppings, I'm going to have enough guano to last a couple of seasons...

In Germany, with all the snow that was around, the birds were virtually dependent on feeders and it was a great chance to spot a few types that we don't get here. Apart from the ubiquitous great tits and blue tits, I also saw some long-tailed tits, greenfinches and chaffinches, a nuthatch... 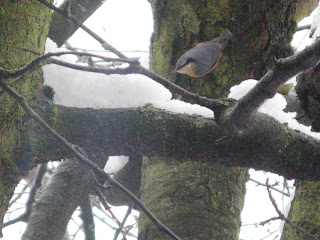 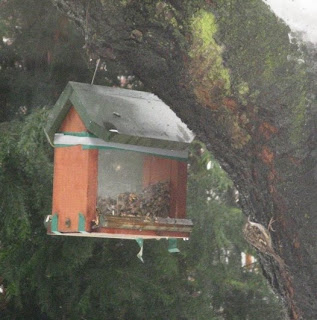 Forgive the lousy photos - I had my camera on the wrong setting without noticing it.

There were various raptors around too. I saw a lot of buzzards in the woods, and a dead blackbird's head and mass of feathers in the snow on New Year's Day suggested we'd been visited by a sparrowhawk in the early morning.

Labels: Birds and Wildlife, Off the Balcony

Hi Sue; never mind the quality of the bird photos - the fact that you were there, camera in hand, at the right time is the important thing. I have seen a Nuthatch in my garden a few times, but they never stay long enough for me to grab my camera. And I've never seen a Tree-Creeper at all. My best sighting so far this winter has been 3 Blackcaps simultaneously.

I always find it a little funny what the birds and squirrels are capable of. No manners what so ever. Greed sets in then the food is everywhere. My sparrows have the little worker birds at the feeder sending food flying for the masses below.The feeder in empty in no time.

Are you taking guesses for which weeds pop up in the windowbox under the feeder? Because I'll throw millet out there. I have a bird feeder at my office and the extra seed falls in to a garden bed that the "gardener" neglects. It's now over run with millet.

Hello Sue, It is always a treat to see the birds at the feeders. We live just at the edge of the city and are visited by the more unusual birds. Last week I spotted a goldcrest and a treecreeper. I don't know what's happened to the common sparrow they are now seldom seen where we live.