When I was a child, growing up in South London, garlic was the epitome of foreignness. My mother wouldn't have touched it with a bargepole. It was one of those things, like snails, that the French ate, and therefore decidely beyond the pale. (When I got older, I did once point out that she would eat winkles at every chance she got, but received the reply, "Yes, but they're food.") 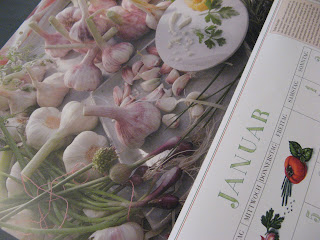 Back to garlic. Suffice to say that I had to wait till I left home before I discovered what it could do for food - eating it was one of those daring, "forbidden" new experiences which awaited me when I got to university.(Don't get excited - the others were things like curry and stirfries. Food plays a large part in my memories of uni.) And I was immediately hooked.

One of the reasons I'm obsessing over garlic at the moment is that it's the featured plant on this month's page of the garden calendar that I found under the Christmas tree this year. Santa (in the guise of my sister-in-law) brings me one every year. It's always garden related, and it gets pride of place in the kitchen all year. This year the focus is on herbs and spices, and January is garlic.

I talked in Part One of this post about how useful it is to deter insects and fungi in the garden. But of course, as well as being good for plants, it's equally good for us. Leaving aside its folkloristic reputation of protecting against the plague and vampires (though it might not hurt to take the odd plait with you next time you happen to be in Transylvania), it's recognised as being good for the heart, and as protecting against some forms of cancer. This in addition of course to the anti-bacterial properties - something I tried out at Christmas when I managed to slice open my finger with a knife I'd been using to chop the stuff. Can't say it was the pleasantest experience I've ever had, but boy did that cut stay clean...
What was I making at the time? Garlic bread - one of those totally simple foods that always tastes as if it originated in heaven. I always make it to accompany roast chicken and turkey - I'll leave you to guess which I was cooking on Christmas day - but it goes well with a lot of pasta dishes, peppers, all sorts of things. 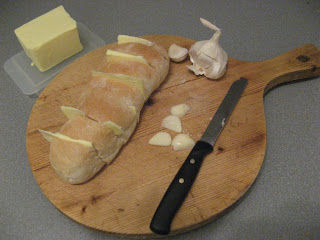 The easiest way to make it is just to make some vertical slashes in a baguette type loaf (or whatever you can get that's similar), and stuff each slash with a slice of butter and a slice of raw garlic. However, an alternative is to soften the butter first, crush the garlic, and mix the two together along with some finely chopped herbs - I usually use chives or parsley. Then stuff the cuts in the bread with the mix, as before.

Wrap the lot in foil and pop it in the oven at about 400F/200C/gas mark 6 for about ten minutes till the crust is crispy and golden. 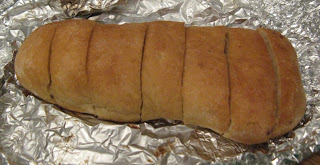 OK - it's not the recipe to use if you've got a cholesterol problem or are trying to lose weight. Garlic is often touted as a way to lower cholesterol, but recent research doesn't seem to support the claim. I suspect this sort of garlic bread, with its heavy dependence on butter, was originally a French recipe. If you want something a bit more healthy, there is of course the Italian version, bruschetta, which is just slices of toasted bread plus garlic and tomato. I love Italian food, and much of the best of it are the traditional recipes of the poorer part of the population - one of the most delicious things I ever tasted was Panzanella - a "salad" made with stale bread, oil and tomatoes - a recipe invented so as not to waste left-over bread.

But back to bruschetta. To make bruschetta properly, you need unsalted Tuscan bread and to toast it over an open fire. If that's not possible, use what you can - but bear in mind that you need a trip to Italy if you're going to really understand what's so great about it. Rub a clove of garlic into the toasted bread, dribble some good olive oil over the top, add a bit of salt and a round of very thinly sliced tomato sprinkled with oregano. If all the ingredients are fresh and good quality, it's heaven.

My mother was a garlic-phobe too. I don't think I ever saw a head of garlic in our kitchen in England. She'd eat jellied eels, cockles and all sorts of other nasties, but garlic was something she was afraid of. Here I wouldn't be without it!

I don't make garlic bread very often anymore, but we do make quite a bit of bruschetta, especially in summer when the tomatoes are ripe and sweet. I'm becoming a big fan of Panzanella too. I bake bread 2-3 times a week, and often have part of a loaf left over. All this talk of food is making me hungry!

Oh how I smiled reading the first part of your post. My father was English and growing up we had the most bland cuisine. I also discovered herbs and spices at university thanks to my roommate who had a Spanish mother. I am now craving garlic bread...I think that will be on the menu for supper!

Dear Sue, My mouth is watering thinking about that bruschetta! I like to make it myself, but I think I am well overdue for another trip to Italy. I really laughed at your description of your English mother's reaction to garlic. My Staffordshire mum is proud that she has never eaten it in her life ... and she is 92 this year. Wishing you a happy and healthy 2011! P x

Sue, I kind of laughed out loud at your first paragraph. Memories are wonderful and full of delight.

We love garlic and cook almost all the time with it: soups, stews, pasta, pizza... we have it growing in our garden, but never seem to have enough.

A Happy and healthy New Year to you.

Great post...you make my mouth watering. Garlic bread is one of my favorite dish. Thanks for sharing the great experience and information.

Love those garlic bread! Actually garlic ward off a lot ailments, and the Chinese says "a garlic a day keep the doctor away"! Just look at the amount garlic they use in their cooking or in any Asian cooking! Recent breakout of H1N1 (influenza like fever) here, we were advised to take a lot garlic in our food everyday to ward off that nasty bug..Yeah for garlic!

Hi Sue,
Garlic...simply one of THE best flavours. As I was reading your post about it's uses, bruscetta etc, it took me back to our time in Italy a few years back. We had hired a little car at Pisa, had a tiny tent and camped/hotelled our way from Pisa, through Florence, Montepulciano, Assisi, Rome and finally Sorrento. Best three weeks we ever had, and the food was out of this world!

I love garlic and eat it with (almost) everything, and luckily my mother did too! Here in the Midi we don't eat butter, so garlic bread is rare, but croutons - slices of bread soaked in olive oil and covered with as much garlic as you can add, then toasted in the oven - are often served with meat and fish dishes. Wonderful!

I never appreciated garlic in my youth, but came to like it much better as I grew older and wiser. The Italian bruschetta recipe sounds heavenly - especially the part about going to Italy!

Two of my favourite things to eat, garlic bread and bruschetta. I make my own ciabatta, and that made into bruschetta with home grown tomatoes is my idea of heaven. Drat, now I'm salivating...

PS I discovered garlic at Uni too - and chillies, aubergines, courgettes, curries that didn't contain sultanas and were not made with two tablespoons Sharwoods curry powder... Though the rumour that they had closed down one of our favourite curry houses because the health inspector found half an Alsation in the freezer put us off for a while...

Sue, that is so funny, I can go along with Karen regarding bland. Never mind garlic, I had never tasted mushrooms until I got married, spaghetti, no way unless it was a tin of Heinz.Curry unthinkable, rice was only for a stodgy pudding. Well you get the drift, anyway we are all healthy and mother celebrated her 90th birthday last week.

Sue, I would be ill from the French version of garlic bread due to my allergies with dairy! Bruschetta however is a favorite! I suppose one could use olive oil in the baguette version too. Not the same I know, for I used to love the buttery kind. Very amusing about the winkles being thought food but not garlic! ;>)

Sue, I just got to thinking about it, I featured your garden photo on my blog without asking for your permission.

I really enjoyed your post. I love garlic bread but when I was younger would not touch it. Like you, I learned so many ways to use it and also the health benefits. My mouth was watering the whole way through the post. Plus, I like vampire movies. A handy weapon to have. LOL.

Hi there... thank you very much for sending a message to me at Blotanical... To be honest, I am not very well versed with computer things, so I am actually having some problems on how to get by in Blotanical... anyway, it doesn't matter...

And yes, I do keep a blog on my gardening... you are most welcome to take a peep...

My missus and I love garlic... we had some preserved in soy sauce for about two years and we ate some of it as a side dish yesterday...