Over the past couple of weeks, the work of uncovering everything on the balcony and cleaning up has gone on. And I've been happily surprised how well everything has overwintered. I've lost one spider plant, and that's all.

The weather has stayed much the same since I last posted. With the exception of a few days when we had torrential rain, it's been a matter of warm sunny days but nights well below freezing. Down to -8°C according to Google, though I have to say I've not been out at 4am to check. So the fleece stays on - but the daytime temperatures, which have stayed up between 10°-15°C, have meant that everything is clearly coming back into growth.

When I attacked the back balcony, the first job was to sort out the chrysanthemums. I cut back all the dead flowers and shoots from last year... 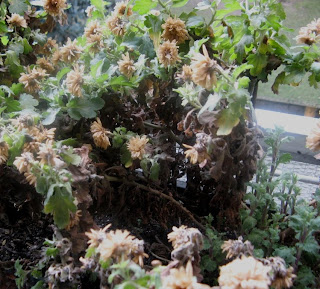 ... and there were the new shoots coming through. After last year's chrysanthemum experiment I shall certainly be leaving most of them on the old plants, even if I do take cuttings later on. 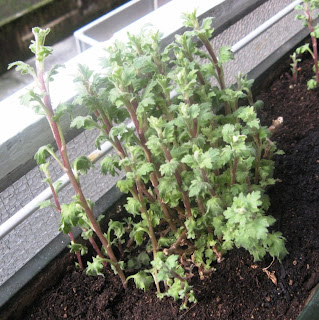 The sedum has come through well too, and the flower shoots are already forming. Usually it blooms in April, but it seems so far on that I wonder if it will be early this year.

Every other container I uncovered seemed to have wallflowers in it - which won't be a surprise if you were around last year when I rather exaggerated the number of seeds that I put in. They were mixed though - some yellow-brown ones that I'd collected from past plants, and some red ones from a packet. Needless to say I didn't label them or keep them separate. We'll see when they bloom... 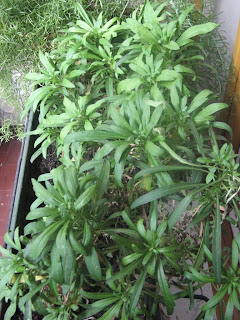 Then there was the garlic. You may remember that I planted it in January. You may - but I didn't. I'd completely forgotten about it, and when I uncovered it, it had that look on its face that said : We know you drowned our predecessors last year, and we know that this year you promised not to overwater us - but come on ... we're not camels. Sorry lads. 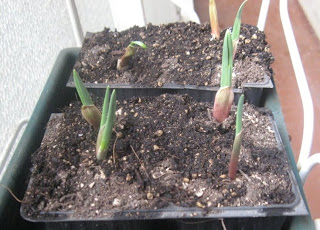 But it was when I started on the office balcony that I got the best surprise : the pelargoniums are already coming into bloom. Not bad for February. 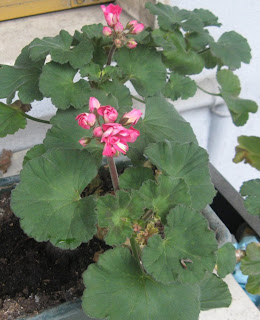 Now - I feel a bit guilty posting this pic just after Jan of Mud, Gorse and Pines has recently posted about the sorry state of hers... but Jan, I'm not gloating, really... promise... I'm not...
Posted by Sue Swift at 8:15 pm

The diference is that you looked after your pelargoniums, and I didn't. I left mine out to take the full force of the winter winds, and they didn't like it. I've only myself to blame and I think I'll have to buy some new plants when I see them on the market.

This is why I loved spring because of those beautiful flowers! They're amazing and can really take your stress away.

I was much cheered by your flowering pelargonium, as I am coming to Lake Como in six weeks and have noticed the weather hasn't been too good. I don't really know what to expect, but hopefully it will be pleasant enough for me to visit the various Villa gardens in the area. Do you think there will be tulips in mid April?
Martin (at Ernie and I) on Blotanical

You say you have "no garden" on Blotanical, but that is a real understatement...you have some balcony! I can't wait to see your blooms.

Hello Sue, its great to see your balcony start to come back to life. Your Pelergoniums are indeed a surprise. Our daytime temperature has been around 8/11c these past few days but of course the temp in Milan will soon start to soar. Of the four seasons I like the Spring the best.

Hey Sue, thanks for checking out my blog! I discovered the mystery of my strange looking rosemary seedlings, as they grow get older the leaves get thinner and more needle-like. I checked out some photos online and indeed they are rosemary.
Love your blog, happy gardening! :)

Thanks for visiting my blog and becoming a follower. Great to 'meet' you. Loved your comment about a horse with more than 3 legs LOL. My Mum always used to say the front bites, the back kicks and the middle is b...... hard!! I will be back to see how your balcony garden progresses. Diane

Glad to see that you are getting to start your welcoming of spring... it is a lot of work, but I find it pretty refreshing after not getting to be out much.

And I am an Anne Elliot too btw... And big Austen fan.

Your balcony is coming to life. Funny about your garlic. Poor guys must have been parched. You really have a section of plants, soon enough they will be thriving.