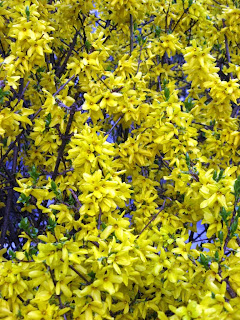 March - and the month that, here in Milan at least, we can really get going with the serious stuff. The beginning of the month was very mild - two weeks ago I was out on the balcony in a short-sleeved T-shirt. It was well over 18°C and so, finally, all the last remaining fleece came off the containers.

And then, well, all those seeds were just begging to go in. So I spent a happy Sunday afternoon sowing. 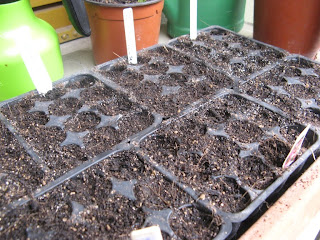 The veg went in first - everything from lettuce and herbs (to stay outside) and tomatoes, aubergines and peppers (to come inside for a few weeks). And then it was the turn of the flowers - antirrhinums, alyssum, calendula, marigolds .. and lots more.

When it got dark I came happily in to cook the evening meal, and turned the TV on to watch the news and weather forecast. And they were forecasting snow for Tuesday.

Well, it didn't happen. But wow, did the temperature drop. Down to below freezing at nights. So the fleece went back on all the containers, and I covered up the seed pots as best I could. 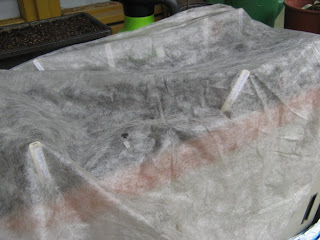 The cold weather (and some torrential rain) lasted a week or so and then the temperature gradually began to creep up again. We've been back around 18°C yesterday and today. 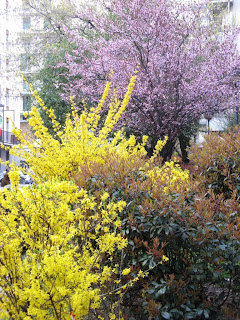 Until a couple of hours ago that is. Adelio and I went out this afternoon to get some bags of compost. It was bright and sunny, and as we went I took some photos of the plants and trees which we saw on the way. There's Forsythia everywhere, and blossom on the roadside trees. And though I'm not desperately keen on this plant (whose name I know but can never remember - I always think of Pieris, but it's not) it does look wonderful in the spring when the new reddish brown leaves contrast with the rest of the bush. 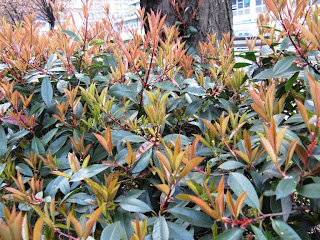 Spring seemed to have arrived.

We were only inside about twenty minutes, but when we came out the sky had turned black and there was clearly a megastorm on the way. We just made it home before it broke... 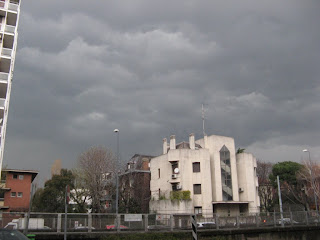 Isn't the plant a Robinia? I love them. The weather here has been peculiar as well, as we've had no snow this winter and only about one frost. We've had no rain until last week either!

Hello Sue - finally got round to reading your blog! Thanks again for all you blotanical help. It's a photinia. I can never remember whether it's phitonia or photinia! There's masses of it around here in west Cork and like you, it's not a favourite of mine. But it's good to see things growing again.

Yes in fact - I just came in, Harriet, to tell Jan that it wasn't Robinia but that she was close - her suggestion had jogged my memory and I'd remembered Photinia. So thanks to both of you.

So good to see spring coming! I read somewhere that it moves north 41km per day. So about two weeks to my balcony north of the Alpes :)

We have had a very strange spring as well. I never know what the next day's weather is going to bring. I think it is great that you are making your balcony function as a garden!

Hi, as I can see your are a very passionate gardener. I love your blog.
Here too, we have a yoyo weather, I still have snow on the ground, it should melt soon, but never soon enough.
I will fallow you, just to see what is going on in your garden.
Thanks.

Your blog is great and I was actually thinking the same as Jan before I saw your post. I thought it was Robinia. I look forward to reading your other post! Have a great week!