The one thing you can’t do if you’ve got a balcony garden is go away and leave it unattended in summer, and expect it to look the same when you get back. Even a short holiday of ten days, like I’ve just had, is asking for trouble. I have the same problem every year – first of all I don’t know anyone here who really enjoys gardening, and would take it on for me, and – even if I did – as everyone goes on holiday at more or less the same time in Italy, they’d probably be away too.

So I have to rely on a very uninterested plant-sitter to water for me, and just forget about the possibilities of pests and diseases. And I know what I will find when I get back – pots saturated and standing in three inches of water, and plants either drowned completely or so weakened that they’re easy targets for anything that wants to eat them. I swear every year that I’m going to invest in an automatic watering system and next year I really must get round to it ….

This year, as I was only away for a relatively short time, it wasn’t too bad. The worst hit were the marigolds. If you look back to August 9 you can see what they were like when I left. This is what I came back to …. 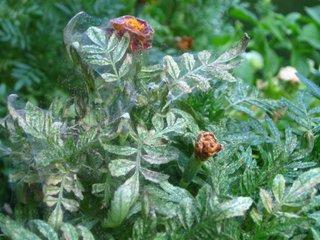 The Revenge of the Red Spider Mite. Obviously I’ve had to yank out and throw away the ones that were this bad, but I’m hoping that about 50% will make it. I’ve cut off the worst-affected lower parts and will spray the rest. 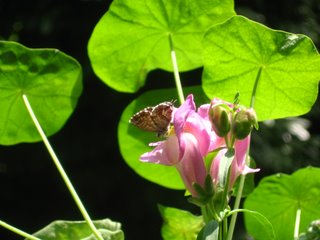 But this morning there were so many butterflies on the balcony that I couldn’t. Here’s one on one of the antirrhinums. Does anyone know what type it is? Its caterpillars are small and green.

And a lot of butterflies obviously means a lot of caterpillars. I’ve lost several plants with others looking decidedly tattered, but nothing that isn’t duplicated elsewhere on the balcony. I shall do a caterpillar hunt later and move them out of harm's way before I start to spray. 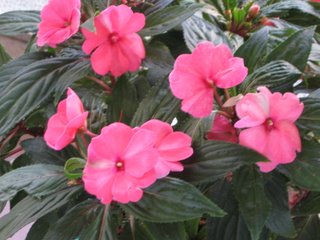 Another casualty has been my New Guinea Impatiens. The photo on the right was taken shortly before the holiday …. 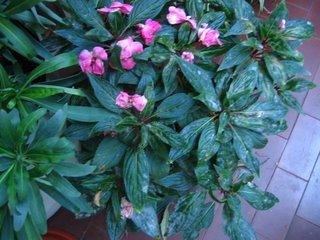 ...and this is what it looked like yesterday.
It’s been hit by powdery mildew. I washed as much of it off as possible by spraying with milk and then wiping the leaves clean. And then resprayed the whole plant. We shall see. If it doesn’t work I may have to resort to a chemical fungicide.
Before I left, I’d sprayed one of my begonias with milk to try and ward off rust. Unfortunately I can’t tell you if it worked as it’s succumbed to over-enthusiastic watering and the stems have rotted away. I’m sure I’ll get another chance to try it out before long though.

I’ve also lost a number of seedlings through damping off, though the ones which were already well established are doing well. And talking of seedlings, the ones in the photo in the last post were, in the centre antirrhinum, and then going from one o’clock in a clockwise direction : foxglove, lychnis, hollyhock, bellis, forget-me-not, honesty and stock. 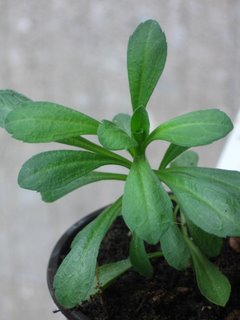 The final plant, at twelve o’clock, is the mystery plant. I suspect it’s a type of erigeron, though it’s not like the ones you normally see in gardening books. I got the seeds from a plant growing in a rockery garden. It produces a thick, almost woody stem and trails along the ground or over the rocks. And produces a profusion of daisy type flowers with pink petals and a large yellow centre. It was in a position that got very little rain, so obviously likes dry conditions. You couldn’t see it very well in the last picture so here’s another one. Any ideas??
Posted by Sue Swift at 4:59 pm

I don't recognize your mystery plant. You have my sympathies on all your pests and plant troubles. It is very difficult to leave a garden, especially if you leave it in the care of a non-gardener!

I am sorry about your mildew! I hope your vacation was wonderful and it made it worth it!!
That's the hardest part about the garden, you always leave it for a week or two when it needs you the most!

It is so hard to leave out babies, isn't it?

Can I say that your pictures of your plants look great, as far as the the composition of the photographs look? I LOVE the one with the butterfly in it.

I think your pink daisy is a painted daisy. Could be wrong, but I thought I would toss it out.

Hi Hannah - I've just looked for painted daisy on Google and the petals are wrong. They're too big. And the plant is too erect. Mine has flowers with several layers of needle shaped petals. But thanks for the idea - and to everyone for the comments.

Hannah - I've just come across some more really nice butterfly pictures. Have a look at
http://inmykitchengarden.blogspot.com - the August 26th post.

Sorry-can't help you on the mystery identity, but we could exchange links! Your site serves a niche the rest of us sort of forget about. The love of flowers is not denied by a lack of a yard!

Even with yards there is something really intriguing about a balcony full of flowers and growing things. In Brazil I saw apartment builfings that seemed to fairly sprout with interesting plantings from their balconies.

I blogrolled you today :)