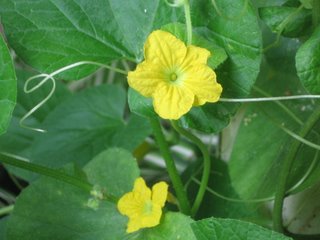 I’ve been having fun growing melons this year. They’re one of those plants which seem to shoot out of the ground so fast you can almost see them growing, and the foliage and flowers are both so nice that they blend in well with the other stuff on the balcony. I put them in a bit late and I’m not sure if the fruit will have time to grow and ripen – depends a bit how warm September is, but this year was really just an experiment to see how well they do in containers. It seems to have worked, so now of course I wish I’d started earlier. But I’ll get myself better organised next year.

I had a bit of a problem at first deciding which were the male and which the female flowers. There were some very clear diagrams in one of my gardening books – the ones with the bulgy bottoms were female. But when the flowers started coming through they all looked the same to me – no bulgy bottoms at all.

After about a week muttering about misleading gardening books, I finally found a couple of females. And sure enough, they looked just like the diagrams. I’ve checked since, and apparently the male flowers usually come through first. I suppose it guarantees that the pollen is available when the females finally arrive. We do get a few bees on the balcony, but I raided my son’s paintbrushes and hand-pollinated just in case, and now have three or four baby melons developing. 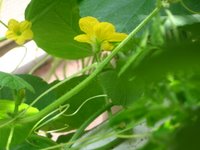 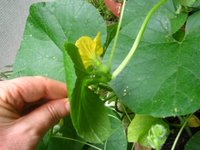