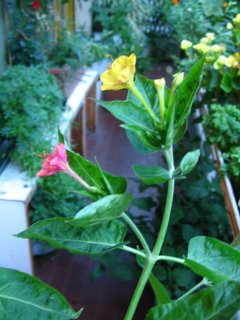 I’ve grown Mirabilis jalapa (Beauty of the Night or The 4 o’clock Flower) for the first time this year and it’s recently started flowering. I’ve been a bit disappointed so far as it’s a tall plant with quite small flowers, and they’ve been coming out one at a time. It only blooms in the evening, and the flowers only last one night, so one or two per evening are not very impressive. However, yesterday it did this – different coloured flowers on the same plant! I checked and it’s quite common with this type of plant, but I hadn’t realised it was possible – does anyone know of any other flower which does the same?

I’ve got six plants all together, and they’re now a mass of buds, so I guess they’ll come out in force in the next couple of weeks – a pity, as I’ll be on holiday and will miss them. The holiday also means I won’t be blogging for a while, so I thought I’d leave you with this … the photo below is a selection of some of the seedlings I’m bringing on at the moment. Can you recognise them? I have to admit I have a sneaky reason for asking – there’s one which I don’t know the name of, though I know what the plant and flowers eventually look like. If anyone can identify it, I’ll be really pleased. 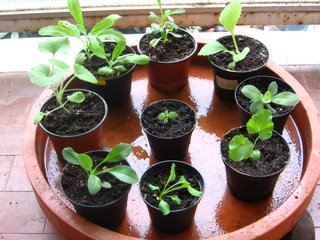 Sue,
Found you through She Who Digs. This is interesting as we may be moving from our London home which has a garden to one where at most I'll have a patio or roof terrace so I'm interested to see your veg growing as well!

Don't give up on Mirabilis jalapa too quickly! There are actually a couple of varieties. The small-flowered one is all over our city on parking strips, in planter boxes, you name it. But there is a larger-flowered variety as well, some of the variants have beautiful speckled flowers. If you can't find it here I can send you some seed.