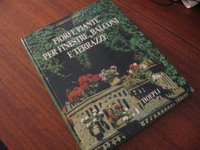 Our local library has just closed for three months, for building renovation work, so I took advantage of the fact that we were able to take out more books than usual for a longer period and got several large reference books – the sort that you want to dip into a bit at a time, rather than read straight through. One of the books I took out was by Christian Pessey. The original was in French, but an English translation of the Italian title would be Flowers and Plants for Windows, Balconies and Terraces. Reading it got me thinking about recycling.
In Milan, household waste has to be separated – paper, glass, plastic and aluminium all go into separate containers from “wet” waste, and are recycled. Which would seem great for the environment. But even recycling has its critics – the amount of energy used in transporting and reprocessing the waste creates pollution, as may the chemicals involved in the reprocessing itself. For the pros and cons, click
here and here.

Another site, and I’m afraid I’ve lost the link, suggested that a balanced approach was to follow the Five Rs : Reduce the amount of plastic etc used; Reuse things wherever possible; Recycle things which really have to be thrown away; Reject items using excessive and unnecessary packaging; and React – let manufacturers and shop-owners etc know how you feel. 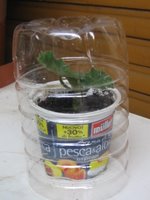 Plessey’s book was interesting from the re-use point of view. Although he didn’t explicitly mention environmental issues, he suggested various ways that plastic packaging could be used in gardening rather than buying new stuff. Some of his ideas were not new – for example, using yoghurt pots for seedlings instead of buying more plastic pots (though even there it had never occurred to me to use a match or red hot needle to make the drainage holes – I tried it out with a candle flame and it was much easier than my usual clumsy attempts with a skewer). But others, though simple, I’d never thought of – for example cutting off plastic bottle bottoms to make mini-cloches to fit over pots with cuttings or seedlings. 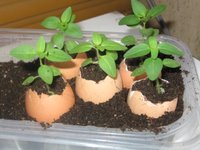 But my favourite idea was that of using the shells of boiled eggs (with a hole pierced in the bottom for drainage) instead of small plastic or peat pots. (For reasons for avoiding peat click
here ). They have the same advantage as peat pots in that the whole “container” can be transferred to the final planting position, without disturbing the roots of the young plant, and the roots will simply grow through the shell, acquiring nutrients on the way. I presume this means a lot of calcium, so it’s probably to be avoided for lime-hating plants, but it would be great for things like zinnias which love lime.

I’m afraid I’ve gone a bit overboard on this one though and will have to calm down. I suspect my family are likely to revolt if they see another egg within the next fortnight…

Hi Sue! You have a wonderful blog. Would you be interested in adding it to Garden Voices? We have garden blogs from around the world. Please email me if you have any questions.

Thank you! I'd love to be on Garden Voices. I'm publishing my answer because I've responded to your invitation before, but you don't seem to get my E-mails :( I hope that you'll see this here.
I love Garden Voices and check it every day - it's introduced me to lots of really nice blogs that I might not otherwise have come across - like Roy's (his posts are better than his puns :))
So put me on whenever you like!

Sue, I've added your blog to Garden Voices. Take a look! Welcome aboard.

Great idea's sue, esp the egg shells.I have used a cut pop bottle as a plant cloche for a mini greenhouse for cuttings.My hydrangea.Happy reading your book.

Looks like you've been added, because that's how I found your blog. I'm enjoying it immensely--and I agree, those egg "pots" are really cute. :)