The Worst of All Jobs 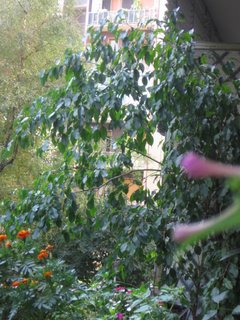 It’s no good – I can’t put it off any longer. I have to wash the tree.

If you have a garden, you probably don’t think about washing your trees very often, but when you keep one on a balcony which doesn’t get any rain to wash the leaves naturally, you have no choice. After a couple of months in a pollution-ridden city, the tree is so dirty that it can’t breathe any longer. Mine’s an 8 ft Weeping Fig (Ficus Benjamina), and also prone to attacks of scale insects if it’s ignored for too long.

So at least twice a year, spring and autumn, I give it a thorough wash – as soon as it goes out on the balcony in the spring, and just before it comes back into the house in the autumn. In between it gets “dusted” and sprayed with water occasionally. But it’s a job I hate - there are an awful lot of leaves on an 8 ft tree, and they all need cleaning individually. I have tried cheating and just dunking the leaves in a bucket of water branch by branch, but the dirt sticks, so they still need wiping down one by one. I usually end up with more water over me than over the plant too.

The tree will have to come inside within the next month or so, and it’s too messy a job for indoors. So I shall do a few branches a day for the next week. I’d love to prune at the same time, but it should really be done in spring. The pruning is going to have to be quite drastic, as it’s getting far too big for the sitting room, so I’ll wait till the recommended time. It also needs repotting, as it’s leaning over at about 60° from the vertical – the result of always having to stand it in a corner. Its branches now grow out in a triangular shape with nothing at the back. The shape suits me fine, but it means that it’s top heavy and is being pulled over. However, with the limited space on the balcony the task of repotting is a bit daunting.

I’ve had the tree for about thirteen years, and apart from the first few years while I was trying to find out what position suited it best in the house (our flat is quite dark), it’s thrived. It tends to lose a few leaves in the autumn when I bring it in, but then settles down again. It needs surprisingly little water, given its size, and nothing special in the way of feeding. I change the top layer of soil in the pot once a year, and use a liquid houseplant fertiliser during the summer.

In natural conditions Ficus benjamina can grow to 20 or 30 metres. It’s one of a group known as Strangler Figs because they often start life sitting on the branch of another tree. They send down aerial roots which, when they penetrate the ground, crowd out and strangle the roots of the original tree. And mine seemed such a nice type of plant ....

You are certainly putting a lot of work into getting it nice and clean. Polution is very hard to get off.

Funny about bow you thought it was such a nice plant. Strangler figs are amazing in the wild. If you ever get down to Australia there is a famous guest house called O'rielys and you can go on walks there in the rainforest and see a few strangler figs in action. They totally take over the host tree and look amazing.

I have a ficus tree in my apartment and I know what you mean about cleaning it! I have to wash each individual leaf. My tree is smaller than yours, though...about 4 feet tall, so less work. I didn't realize they are related to strangler fig trees. I saw those in South and Central America and, as Correy said, they look amazing.

Sue, it could be worse. Our outside drain is blocked - the one the washing machine drains into. Now that's 'The worst of all jobs'.