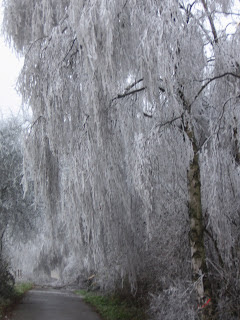 Happy New Year! First of all, here are the answers to the Christmas quiz (because I know you can’t wait) : 1b (my Christmas sprouts had obviously been well frosted, because they were delicious), 2c (don't try this at home), 3a, 4c, and 5 mistletoe. 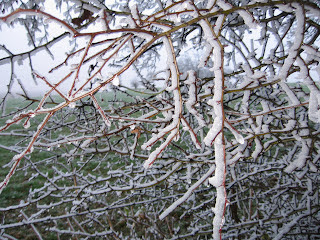 I hope you had a good Christmas holiday. One person who certainly did was Trillium, who won the BBC Gardener of the Year award. Well, she really won it in the autumn, but couldn’t tell anyone until the programme was shown last Saturday. Luckily she had the sense to keep a secret blog describing what happened during the days of the competition and it’s now on-line. As it’s in blog format, you have to go back to the earliest posts and read it in date order, but it’s well worth the scrolling. You can also find out about it on the BBC website. And just in case anyone is wondering, Joe Swift - the presenter of the programme - is not, as far as I know, any relation. But he does seem to have the Swift chin, not to mention a very similar hairline to other males of the family. In fact he bears a decided resemblance to my brother .... perhaps I should do some research. 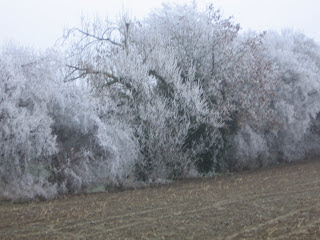 My Christmas was great. As usual we went to Aachen in Germany where my sister-in-law lives. We usually spend half the time tobogganing, but this year it was so mild, there was no chance. Except for Christmas Day when it suddenly, and temporarily, dropped to minus 3°. As it had been plus 8° the day before, the condensation just covered all the trees and plants with ice. These photos were taken on Christmas morning, when we went out for a walk after we’d opened our presents. 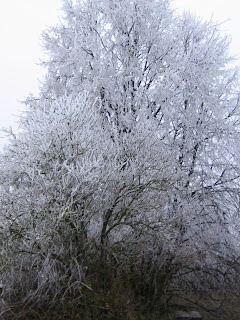 But not the next one. Before I went away, I decided to move all my plants next to the walls of the house, and cover the most delicate with fleece, just in case the temperature dropped while we were gone. And look what I found – a petunia in bloom on December 21st. If that’s not evidence for climate change, I’m not sure what is. 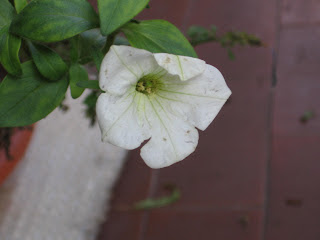 I had two gardening related presents this year. Firstly, a calendar focusing on a different plant each month and the herbal remedies associated with it. It’s in German so I’ll have to get my dictionary out, but I’ll let you know month by month what it says. And the second one was from some friends who gave me this lovely set of cards and envelopes, homemade with photos of flowers from their own garden. A super idea and one I shall copy next year. 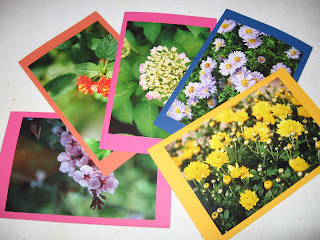 Labels: Off the Balcony, Weather, Winter

Great pictures, I will have to go and read that blog sometime.

Happy New Year to you!

Great photos of the frost on the trees, Sue. We've had no frost at all yet here in north-west England.

Thanks so much for the mention of GOTY and the blog - it's much appreciated.

Happy New Year!
I've tagged you in a virtual game of 'it'. I hope you'll visit my blog and play along! Sarah

Those are amazing photos! We don't get snow in Australia so seeing photos this evoking kinda takes my breath away. Awesome!