The crazy weather continues and half of Europe has had a hurricane. It stopped at the Alps and we’ve not had so much as a breeze here, but the TV pictures have been horrific. I’ve just done a round of UK blogs to see if anyone had posted about it, but it’s too early. They’re probably still all out clearing up. 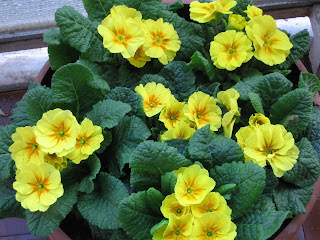 Instead we’ve been basking in the sunshine. Temperatures were 27°C in Turin yesterday – that’s about 80°F. We “only” had 18°C (about 65°F) and today it’s dropped to 14° but that’s still spring temperatures. In January I would expect it to be somewhere between -6 and +5°. The plants don’t know if they’re coming or going (literally) and, according to the TV, yesterday there were butterflies fluttering around. I went out to do a general tidy up this morning (and to enjoy the sunshine) and saw that I’ve got annuals from last year – nasturtiums, alyssum, petunias and so on - that are still going strong, and that loads of stuff which has self-seeded is starting to come through. I’d be tempted to start sowing other stuff – except that they say there’s snow on the way for next week. The sudden drop in temperature will probably kill off a lot of things, so I’ll cover everything with fleece on Monday in an attempt to lessen the shock.

I have succumbed to the early spring feeling though – I went out and bought some primroses . They’re probably my favourite spring flower, and when I go and buy them I always feel that the growing year is starting up again. I have to get them each year from the nursery as, try as I might, I can’t keep them over the summer – the heat and direct sunlight of the balcony is just too extreme for them. Last year I made a special effort to keep them cool and shaded, and actually got one through to September. But in order to shade it I had to hide it so well that I then forgot about it for a week – and found it eaten up by red spider mite. 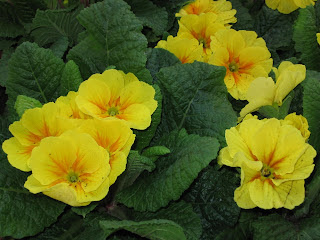