The flower that brought down the stock market 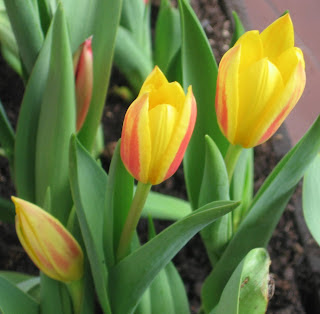 It's Garden Bloggers' Bloom Day again. Spring is definitely here and since last month there's a noticeable difference on the balcony. The seeds and corms that I planted are starting to push through the soil, and everything else is developing leaves again or putting out buds. The things which have been flowering all winter - pansies, pelargoniums, cyclamen - are continuing to do so, but they're looking greener and happier, have come back into growth and doubled the number of flowers.

The only new blooms this month though, are my tulips. 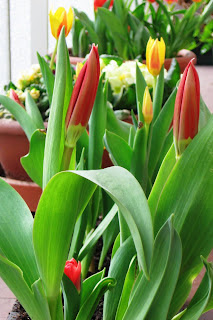 I don't like tulips. I've never grown them before and only got them this year because when we were are the December Crafts Fair, my son conned me into it. I'm a daffodil person myself, and this bunch of bulbs hasn't changed my opinion much. They're quite jolly, and I've made them look as good as I can with sneaky camera angles. But they've been frustrating. They're dwarf tulips - just about the right size for the balcony. But some are far more dwarf than others, making the container look odd. And they've all come out at different moments and lasted a relatively short time. They look great at the bud and "just open" stage, but half an hour of sun sends them blowsy. So that I now have two containers with some tall, some short plants; some buds, some flowers, some that need deadheading. And all in a matter of days. 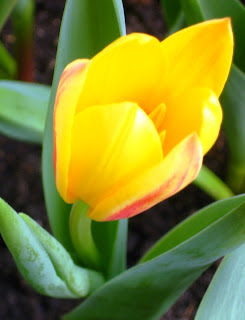 I'm sure they work in a garden where you can plant large quantities. And one of the trips on my wish list is a biking tour round the Dutch bulb fields at tulip time. But on the balcony, I think I'll save the space for other things.

Not everyone has always thought like me though. In the 17th century speculation in tulip bulbs brought down the Dutch stock market. 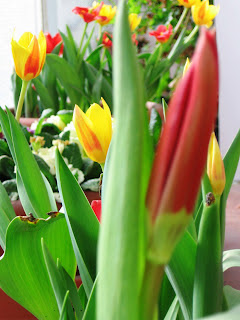 The first modern stock exchange was opened in Amsterdam at the beginning of the 17th century, not long after the tulip had been introduced into western Europe from the Ottoman Empire (the word tulip apparently has its roots in the Turkish word for turban). The colours of the flowers were qualitatively different from any other flowers then available, and they were soon very much in fashion. First the wealthy and then the middle classes started to buy the bulbs, and prices soared. And then in the 1630s people began to speculate in tulip bulbs, buying them for immediate resale. Prices reached ridiculous levels - the all time record was the sale of a rare Violetten Admirael van Enkhuizen bulb for 5,200 florins, but 2,000 was relatively common. And this when the average annual wage was 150 florins. Tales are told of unwary travellers who, failing to recognise the bulbs and believing them to be some kind of onion, picked them up to eat and found themselves thrown into jail for theft by the irate ex-owners.

Investment in the bulbs reached crazy proportions, many people selling their property or using their life's savings to finance their investment, and by 1636 the bulbs were traded on stock exchanges around Holland. Overseas investors also cashed in on the trend. 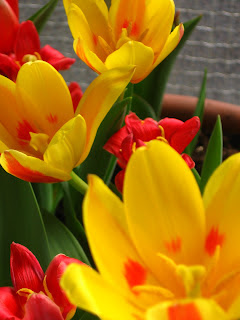 But in 1637, the market collapsed. At an auction the buyers just stopped buying. The market panicked, investors started to sell, and prices plummeted. Huge amounts of money were lost and many people went bankrupt, leading to an economic recession. 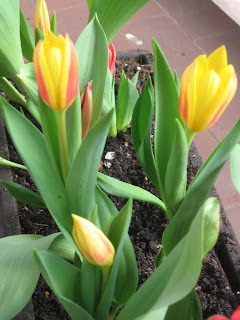 The period was given the name of tulipomania. Much as I love flowers, I don't think there are any I would bankrupt myself for, even though my husband's comments each time I head for the garden centre might suggest the opposite. But apparently it's happening again, this time in Britain with the snowdrop. According to an article in The Independent, bulbs have been selling on E-bay for around £128 each. Crazy...
Explore some more ...

Interest story about the tulip, I never knew that. I have tulips in my garden but like you am not overly keen. Your photography does you credit because yours look great.
My snowdrops never appeared this year. It happened to a lot of people here, hence perhaps the high price on ebay.

I'd heard about the tulip mania in Holland, and the price collapse there...way back when..

I'd not heard of the snowdrop's popularity. Indeed, as I've always been a Southern Gardener, this spring is the first year I've seen them on so many of the Northern blogs.

You don't like tulips?!!! I am still trying to digest this! Oh well, there are plenty of other flowers for you!

I think tulips in containers are a bit problematic. They don't really reach their potential. I think you would like them better if you were able to plant them out in a garden.

You have to admit that they are colorful!

It's interesting to know this old history of the tulip...I can't imaging paying very much for tulips either. There are other bulbs that are far prettier. But as you say - when planted in masses they loook great!
/Katarina (Roses and stuff)

Those are lovely photos of your tulips. I've had tulips over the years, and the wilder ones are my favorites. They return every year. Most of the other types stop blooming after a couple years.

Thanks for your story about history of tulips. I like tulips because of their color. Unfortunately, tulips can't live in Indonesia.
Have a nice day.

Hi everybody,
For those of you who defended the tulips, I have to say that after posting this I shifted the containers around and suddenly one of them at least started to shape up. It's been looking great for the last couple of days.

Surya - welcome. When I looked at my stats I always wondered who was coming in from Indonesia. I hope you become a regular! I really enjyed looking at your blog and seeing how different the plants you're growing are from here.

WOW! I never could have imagined that something as innocuous and beautiful as Tulips could have brouht down the stock market and could have sent an entire country into recession.
I have always been enamoured by rows and rows of gorgeous tulips in fields of Holland and now whenever I see that again I'll be reminded of this interesting story.

For a flower you don't like very much, you sure have a lot of them!

I find that my favorite flowers change every few years- sometimes liking a flower is connected to a memory of it- what it means to you.

Don't feel bad about the Tulips. I have plenty of garden, but I have only 3 Tulip plants - and they're in a raised bed. The problems with Tulips here are rabbits, squirrels, rabbits, & deer. Even without these predators, here in Northern Illinois it is pointless to grow the late tulips because as soon as they open, the temperature will shoot up in the 80s and the flowers all melt. Just not worth it.

I was familiar with tulipomania, but didn't realize that snowdrops were the latest contenders! (There was a hyacinth mania in (I think) the 1800s, not quite as bad as the tulip one but pretty severe.

You can grow tulips in hot climates if they're the right kinds (most of the big flashy kind aren't). The T. clusiana chrysantha that's the top photo is a good tulip for warm winters. But Indonesia might just be too much for them. Still, you get to grow all those great tropical flowers...